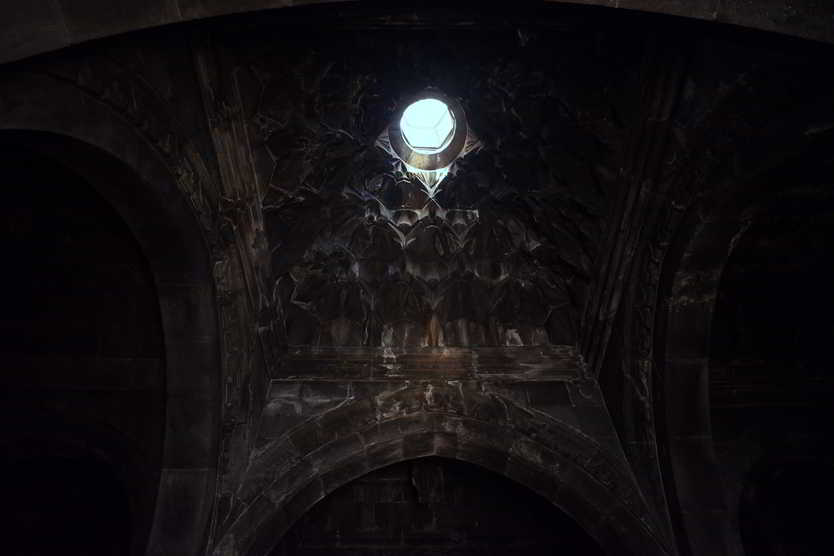 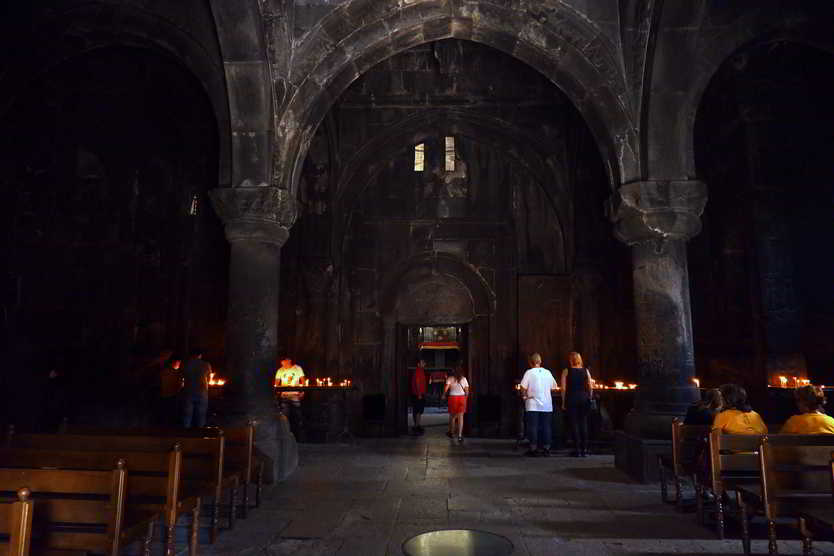 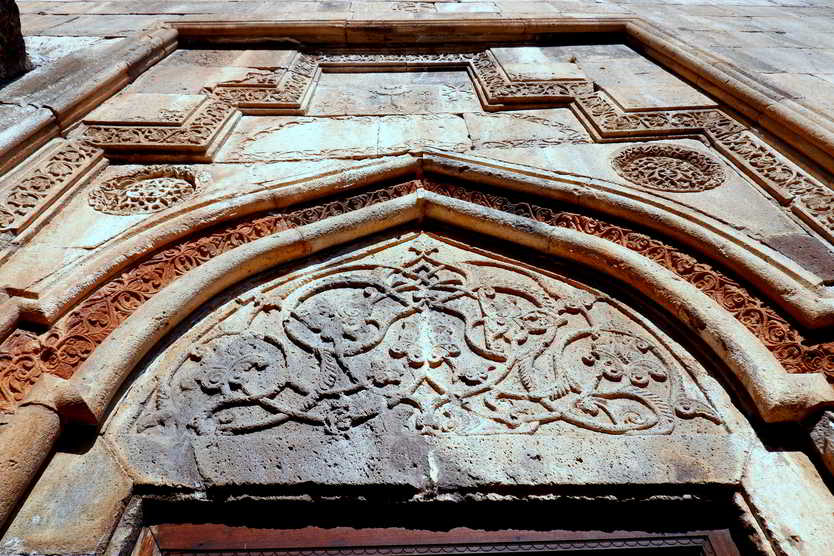 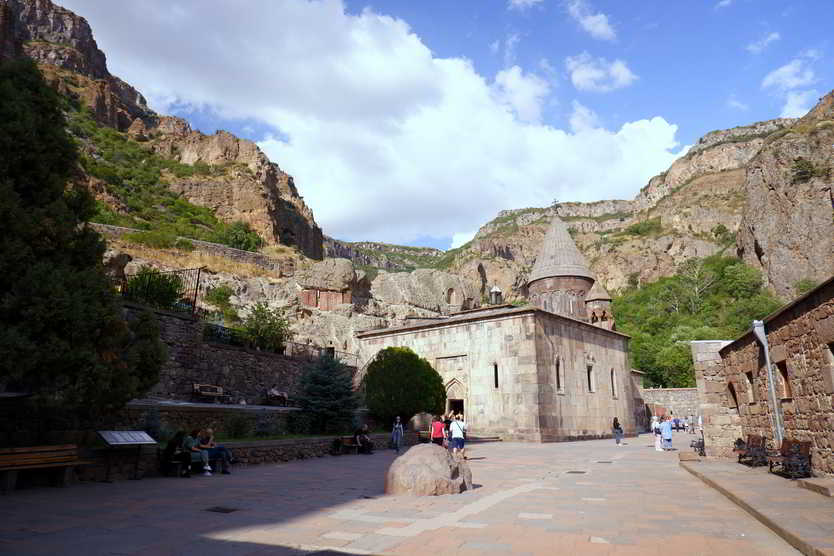 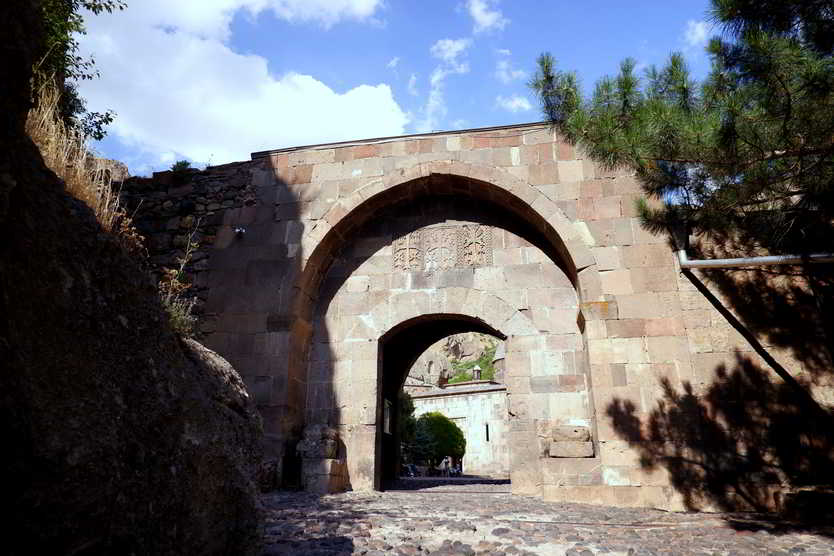 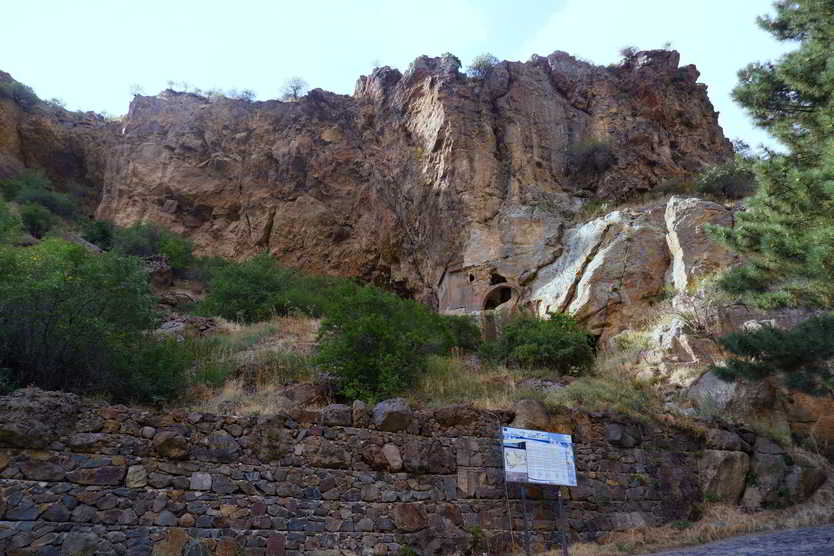 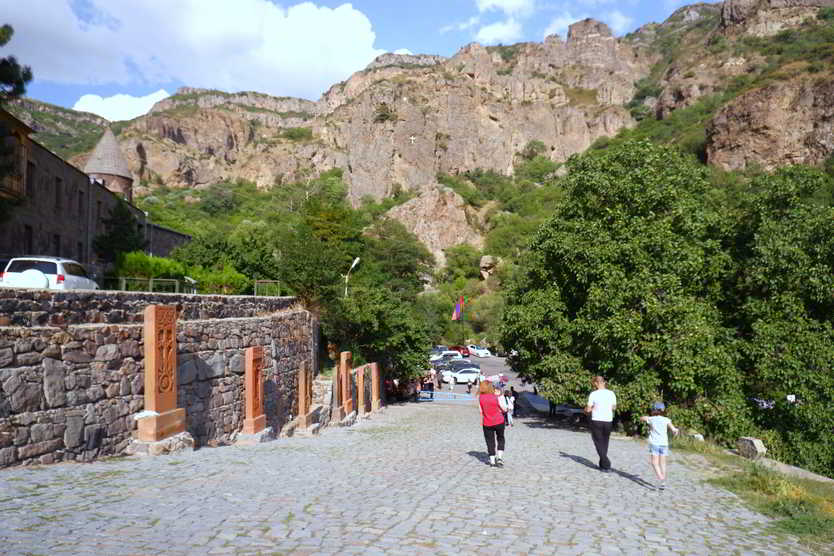 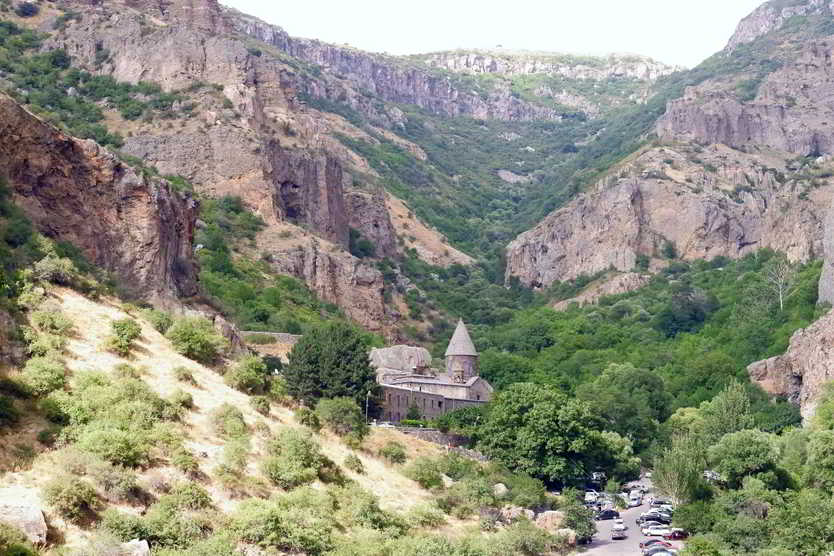 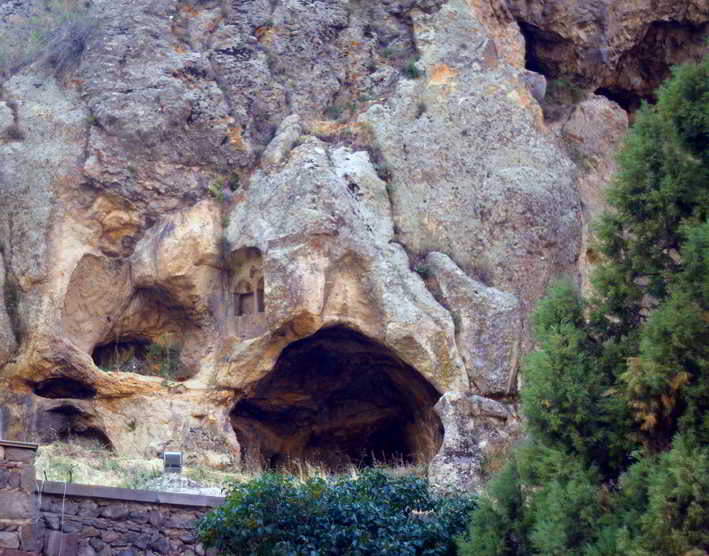 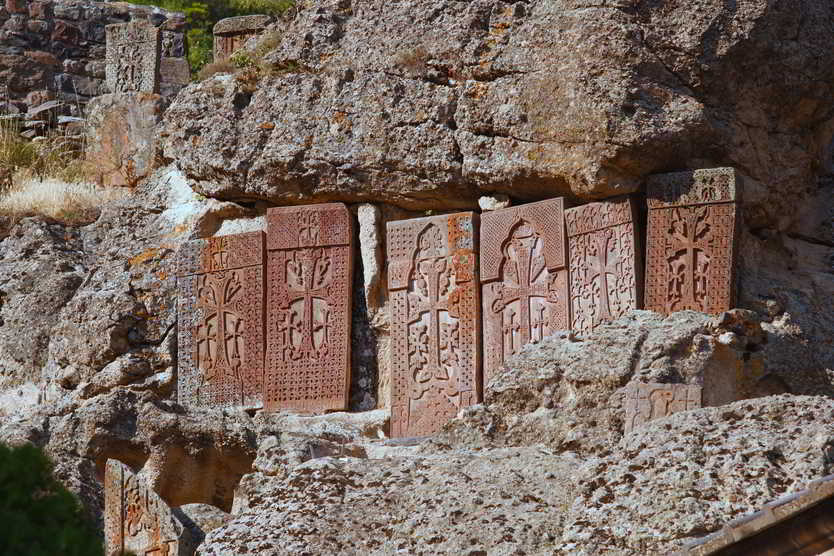 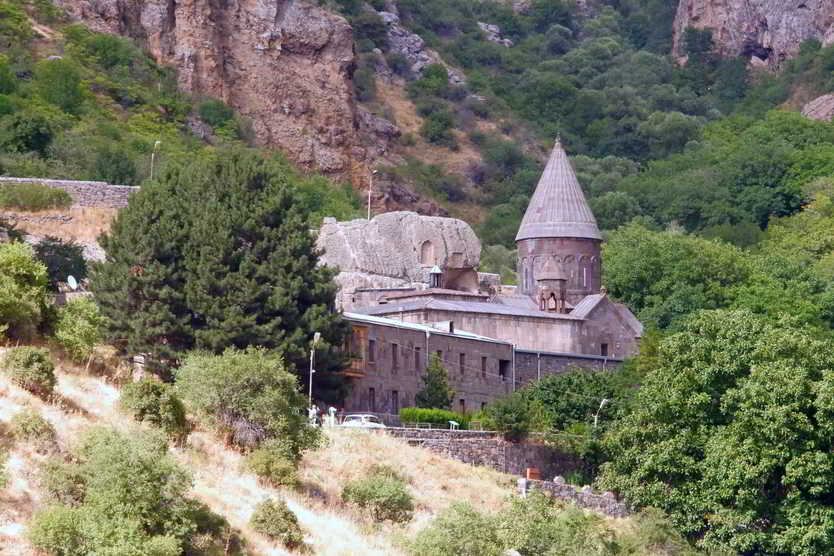 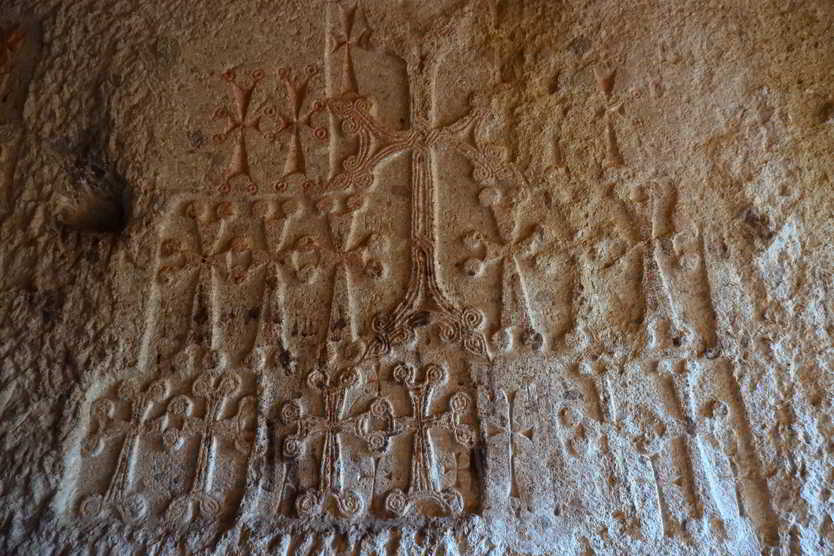 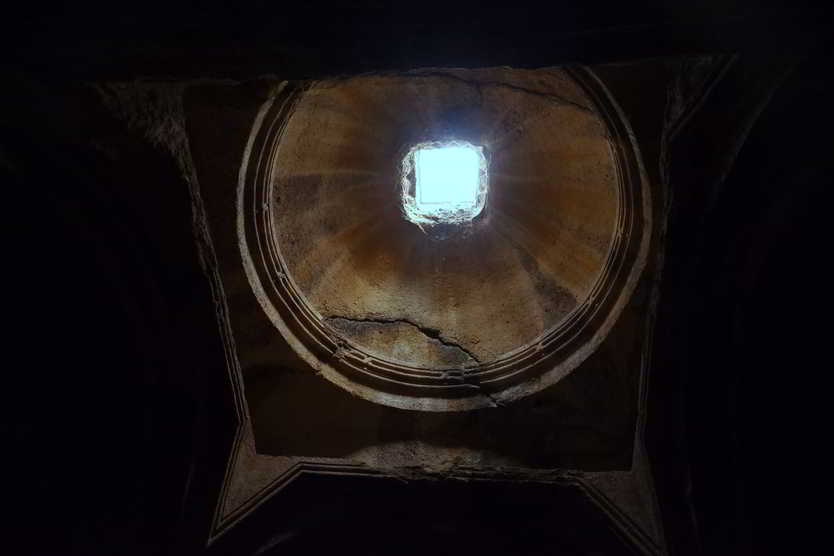 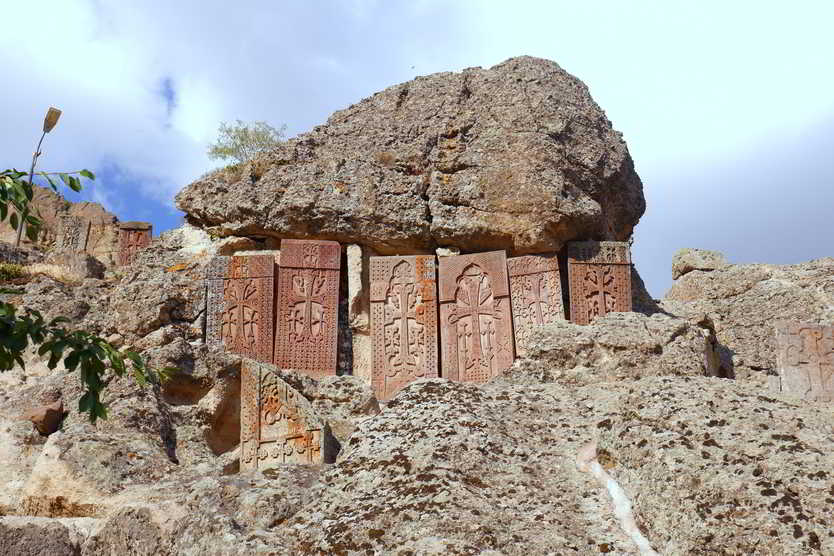 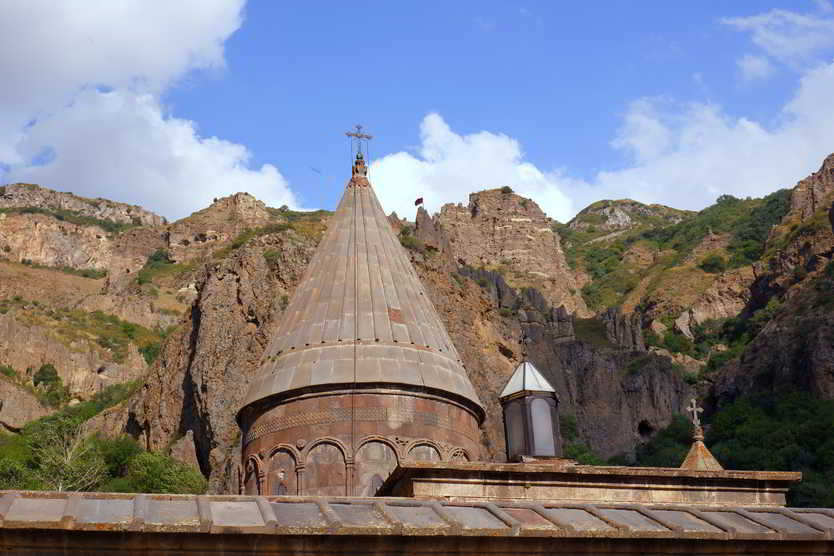 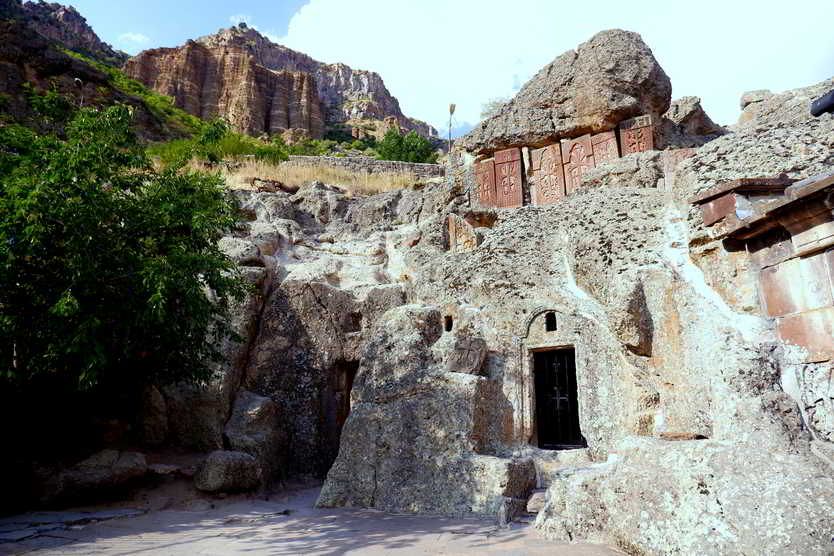 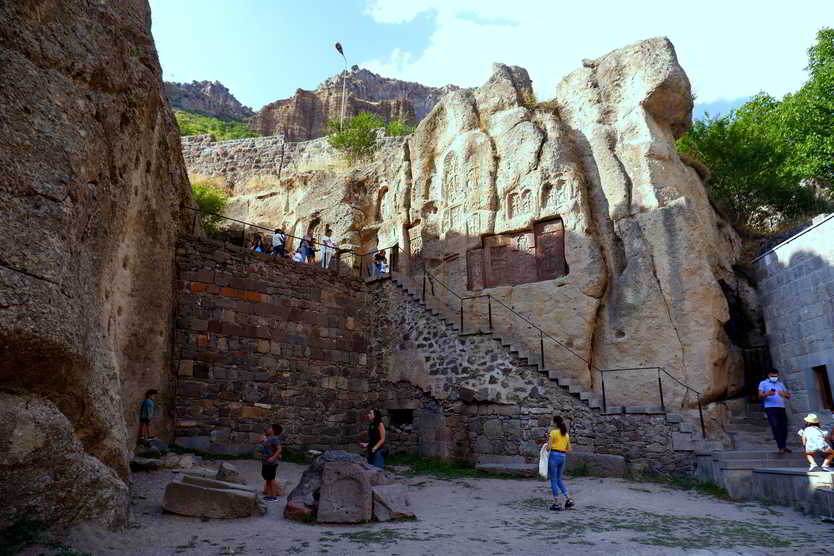 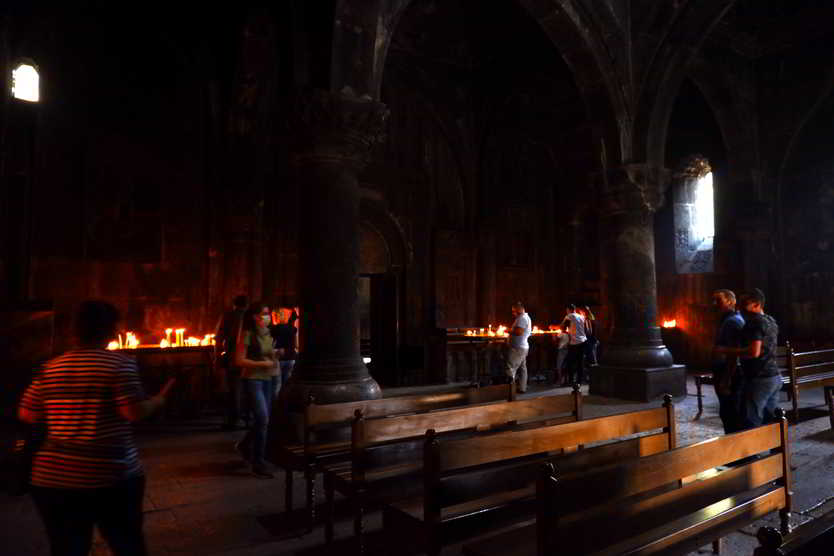 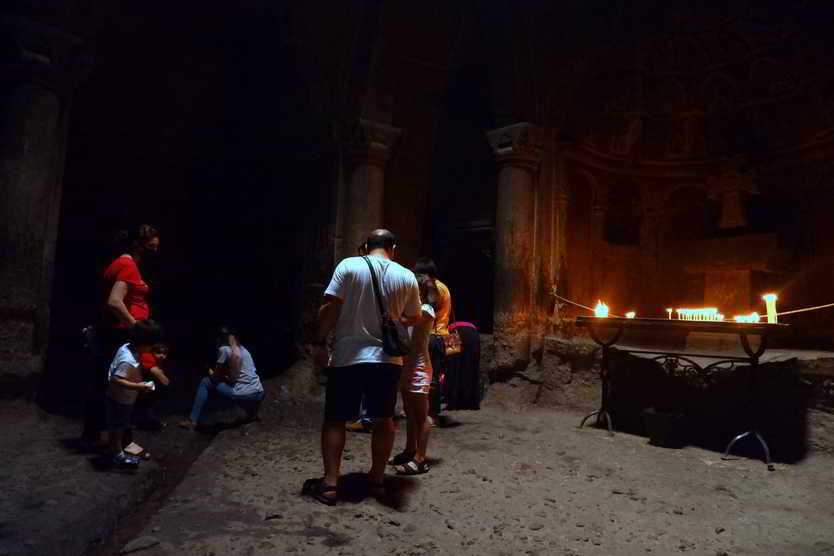 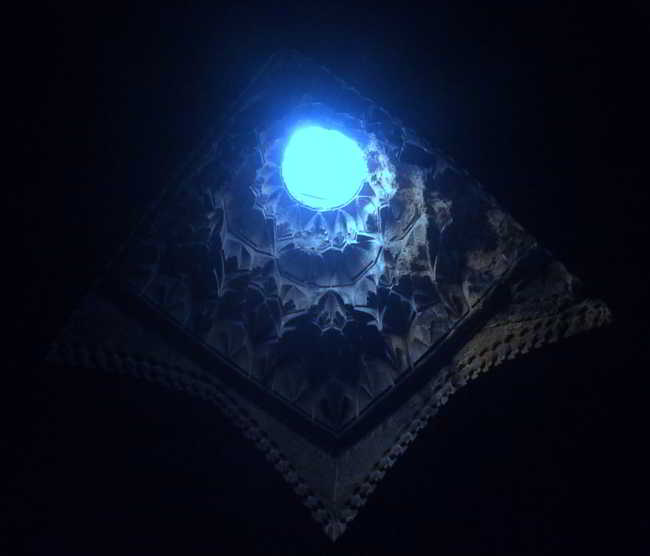 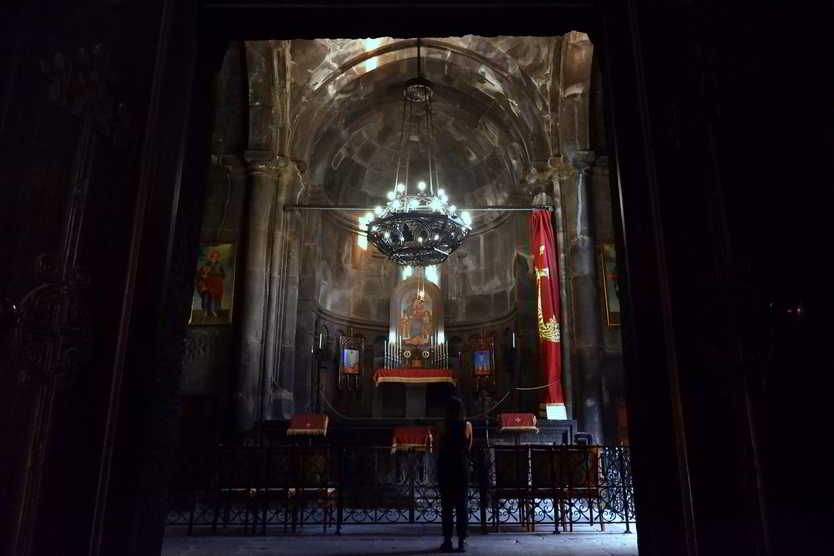 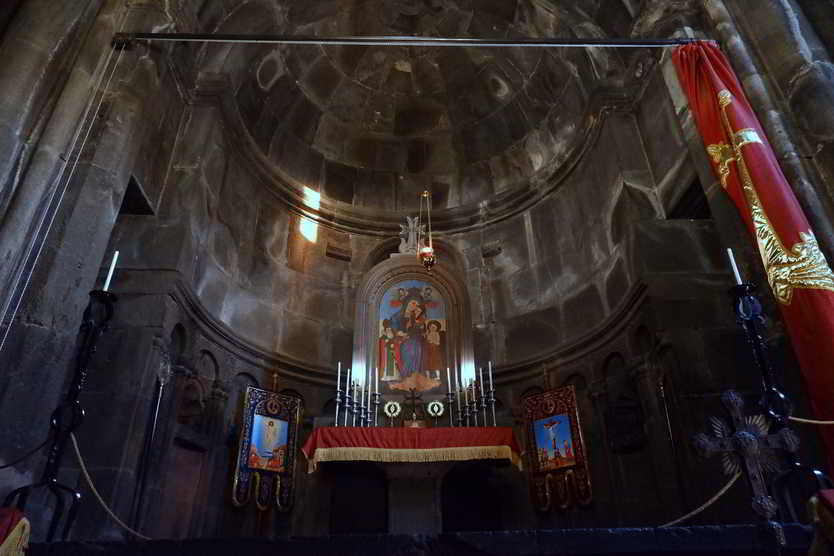 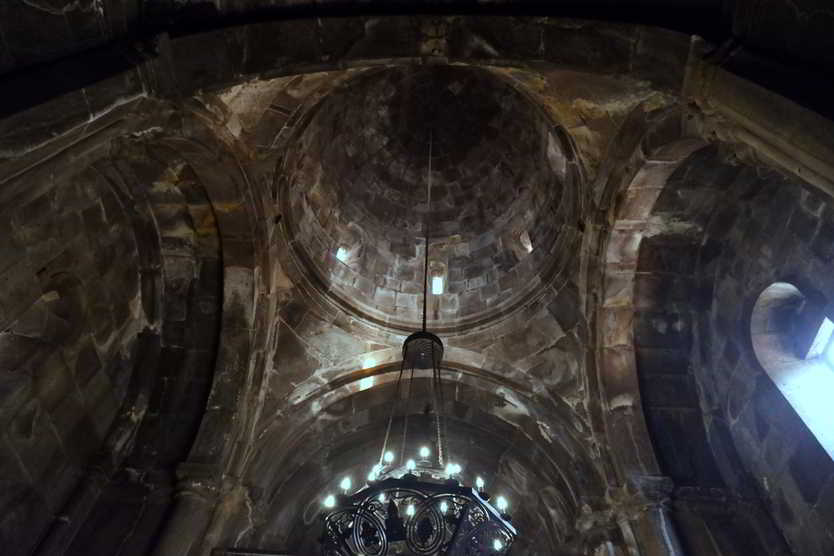 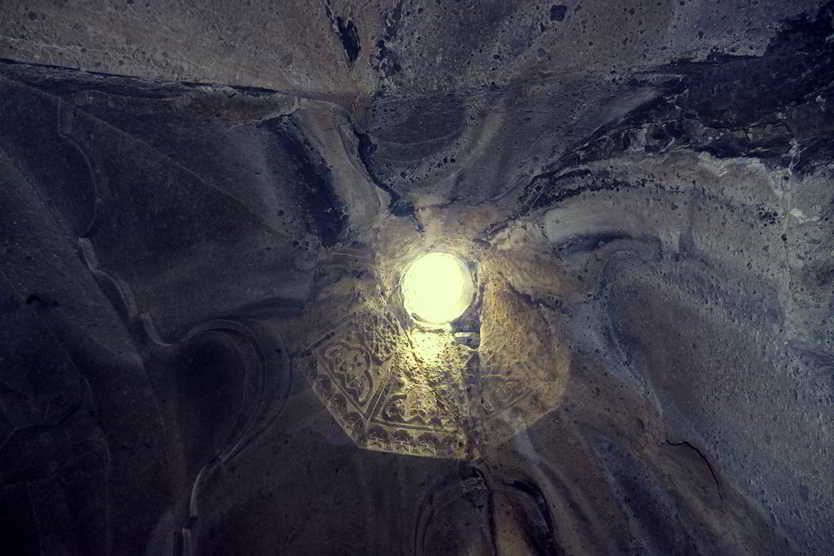 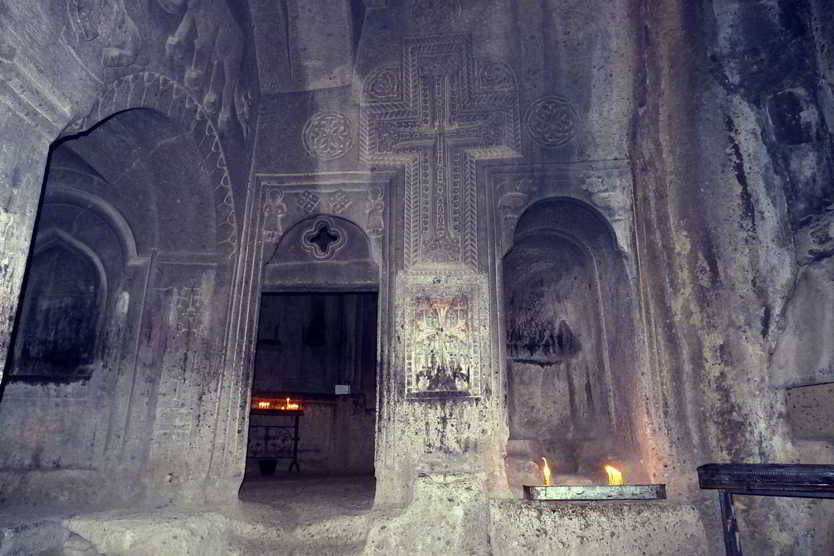 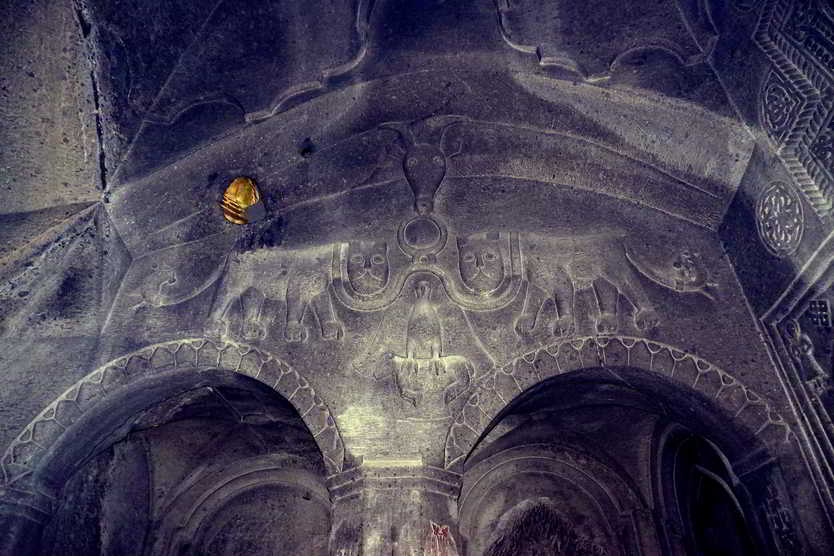 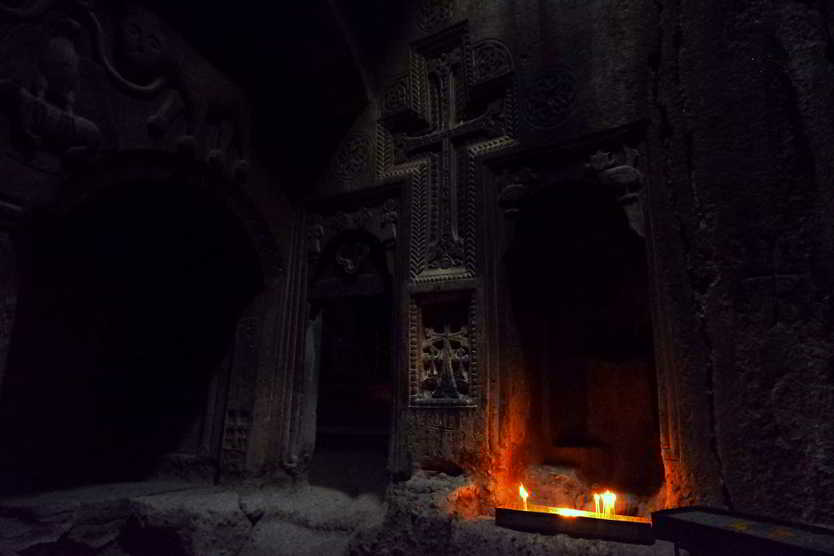 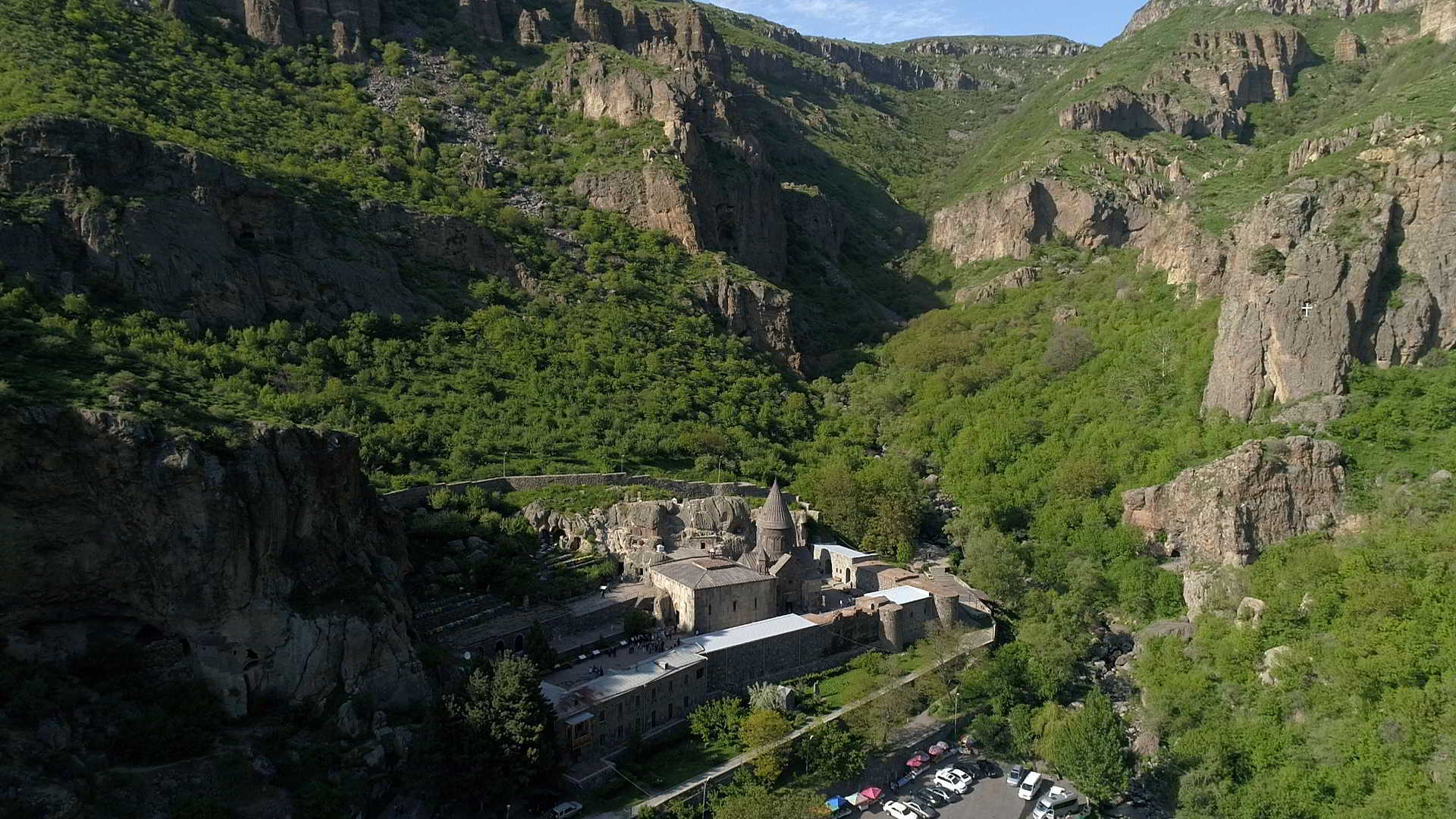 Geghard Monastery (Geghard Monastery, also Ayrivank), is a medieval
monastic complex in Armenia. The famous spear, which was used by the
Roman soldier to pierce the side of Christ, was kept here. He was brought to
Armenia by the Apostle Thaddeus, one of the first preachers of Christianity.
Now he is in Vagharshapat, in the historical museum.
According to the legend, the Ayrivank monastery was founded after the Great
Conversion of Armenians to Christianity on the initiative of the first Catholicos
of the Armenian Church, Grigor Lusavorich. On the eastern side of the
monastery complex, in front of the cave, above the railing of the stairs, are
engraved these words:
/
:
“St. Gregory the Armenian Enlightener”. Nerses the Great lived here as a
hermit.

The monastery complex was built in the early Middle Ages on a site that served
as a sanctuary in pre-Christian times. One of these springs is still preserved
inside the main porch of the monastery. According to legend, the first church
was founded at the beginning of the 4th century, when Christianity was declared
the state religion in Armenia. It was known as “Ayrivank” or “Cave Monastery”.
The founding of the monastery is traditionally attributed to the first Armenian
Catholicos Grigor Lusavorich (301-325), and further prosperity is attributed to
Sahak Partu (387-439). Later, the monastery was declared a writing center,
school, music academy and a place of pilgrimage. The days of pilgrimage to
Geghard fall on the holidays of Vardavar and Transfiguration of the Virgin.

In the developed Middle Ages, after the restoration of statehood (the kingdom
of Bagratuni, 885-1045), Arab troops invaded Armenia and, by the order of
General Nasr, plundered the monastery. After the ruins of the 920s, the
monastery was rebuilt and surrounded by a wall. The inscriptions preserved on
the territory of the monastery complex date back to the 1160s; it is considered a
13th century building. Geghard Monastery reached its peak after the liberation
of the territories of Eastern Armenia by the Georgian kingdom, when the
Zakaryan dynasty was founded (1200-1261).

The monastic complex “Ayrivank” got its name due to the fact that the
cave-cells reached 140. They are only a small part of many hermitages, and
most of them were destroyed by earthquakes. In addition to the main Katoghike
church, the complex has four large handmade cave halls that connect to the
lobby.
Saint Geghard in a box, 1617,
Etchmiadzin Museum.
Another name, “Geghard”, is justified by the fact that Saint Geghard, the
treasured spear, with which the Roman centurion pierced the side of the
crucified Christ, was kept here for 500 years. Geghard is a type of weapon
made of a wooden handle, the head of which is a flat iron dagger with a
triangular edge attached. It was kept in Echmiadzin until the fourteenth century.
After the Mongol-Tatar invasions, it was necessary to move Geghard from
Echmiadzin to a safer place, away from the enemy, where it was kept until the
19th century. When people took a vow to Ayrivank, they simply said: “We are
going to Geghard – this is a covenant” or “We are going to Geghard monastery”.

Geghard Monastery (Ayrivank), is located near the village of Goght, Kotayk
region, in the upper reaches of the Azat River, on the right bank.

Travel to the most notable holy destinations in Armenia.

Reviews for the Geghard Monastery