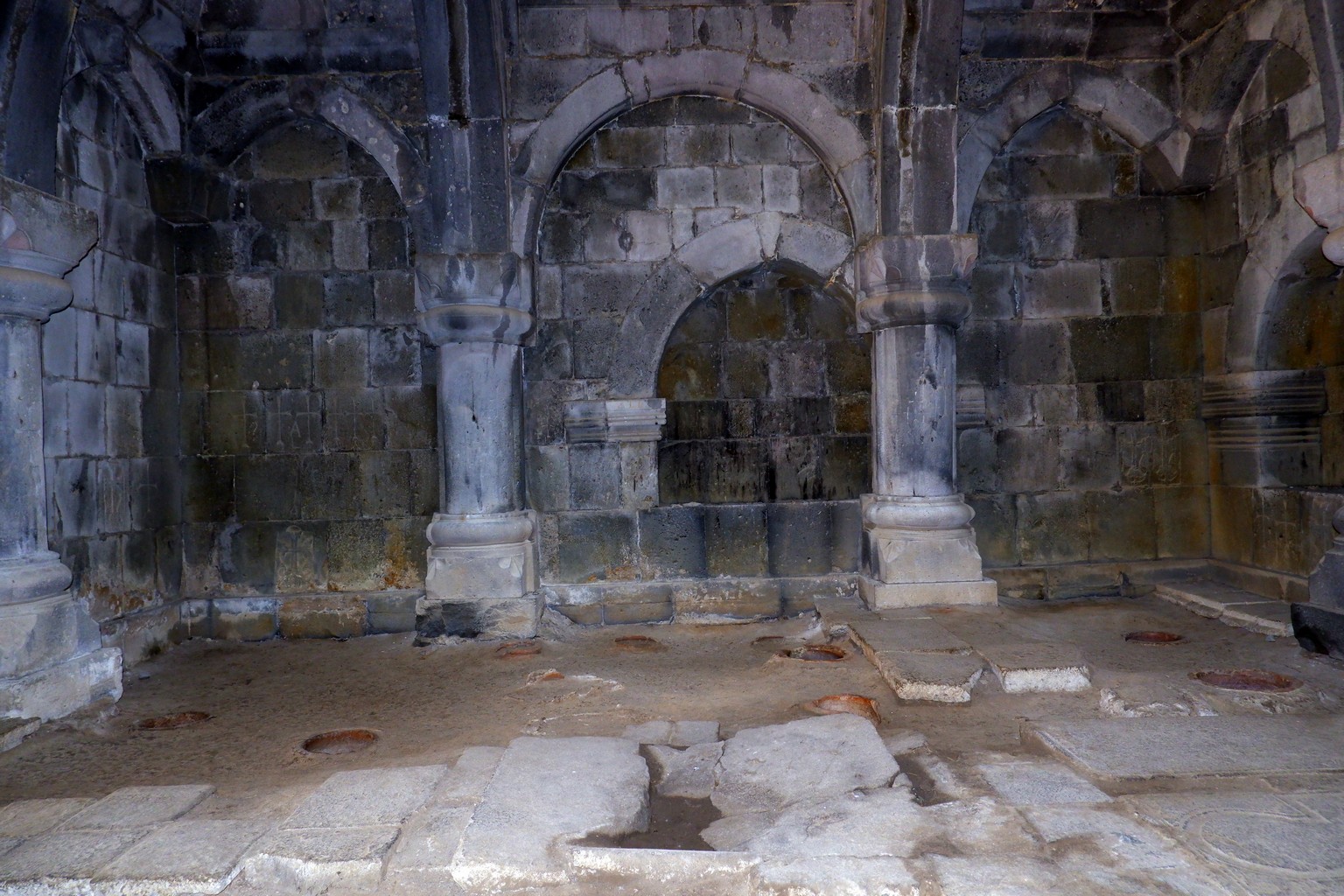 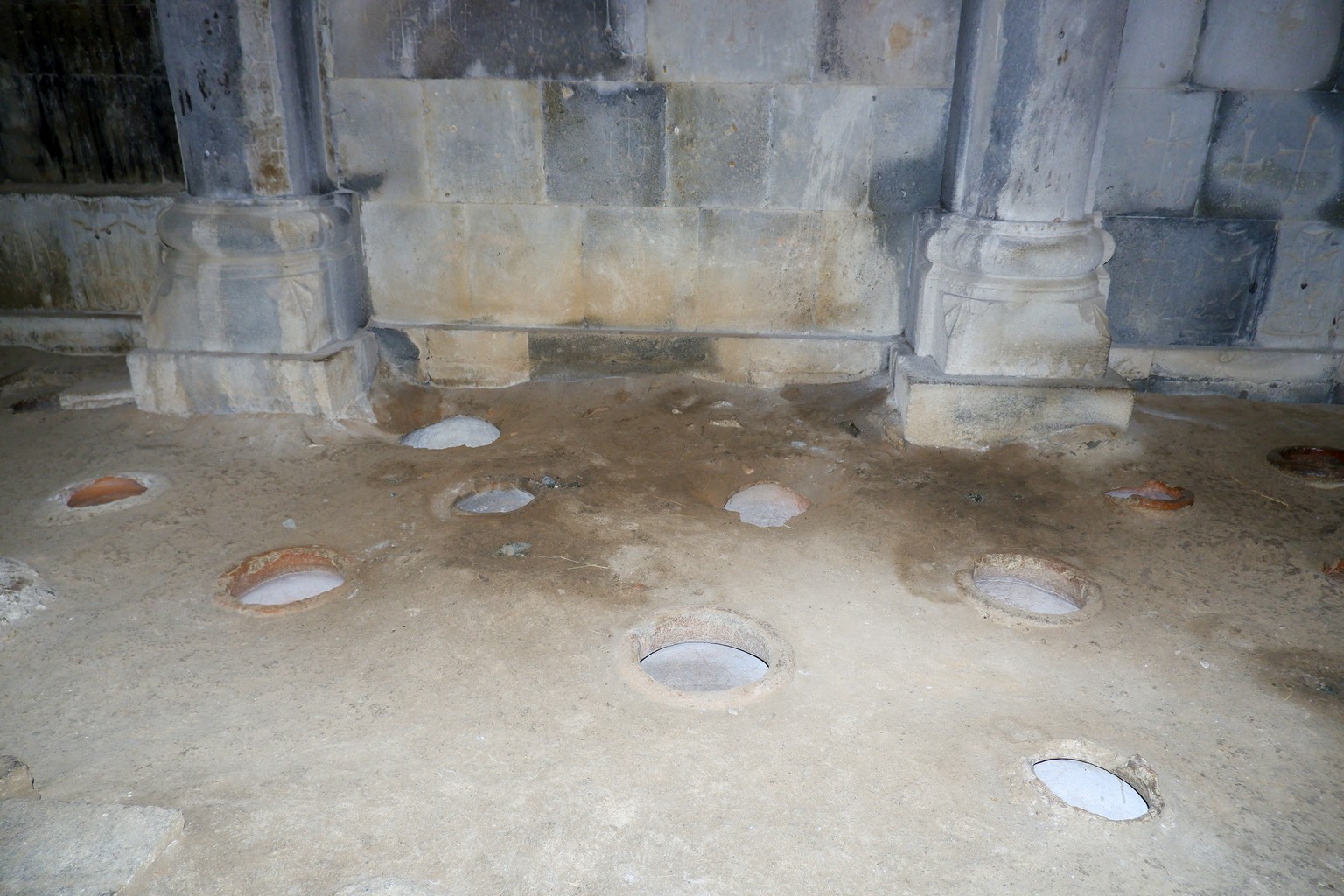 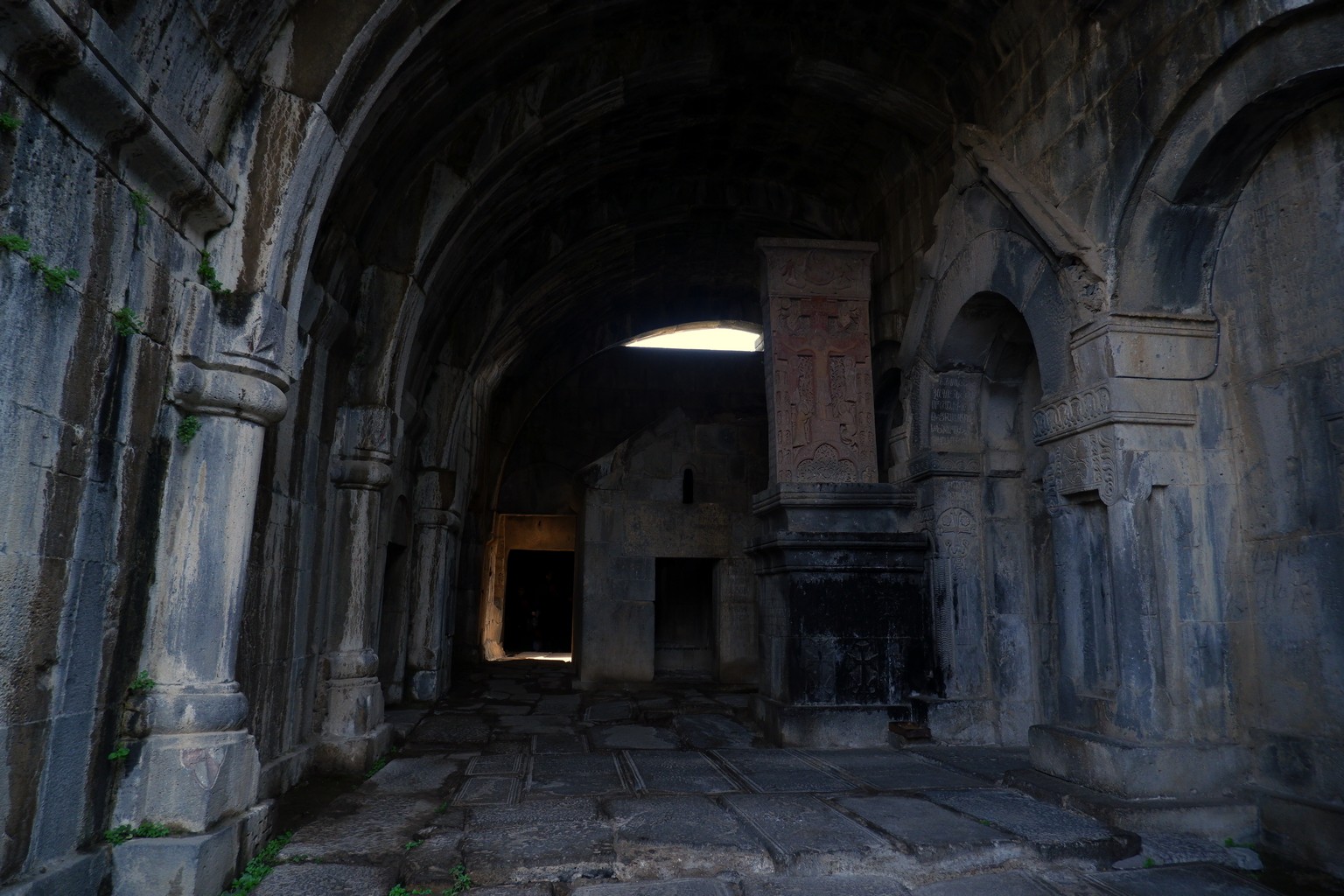 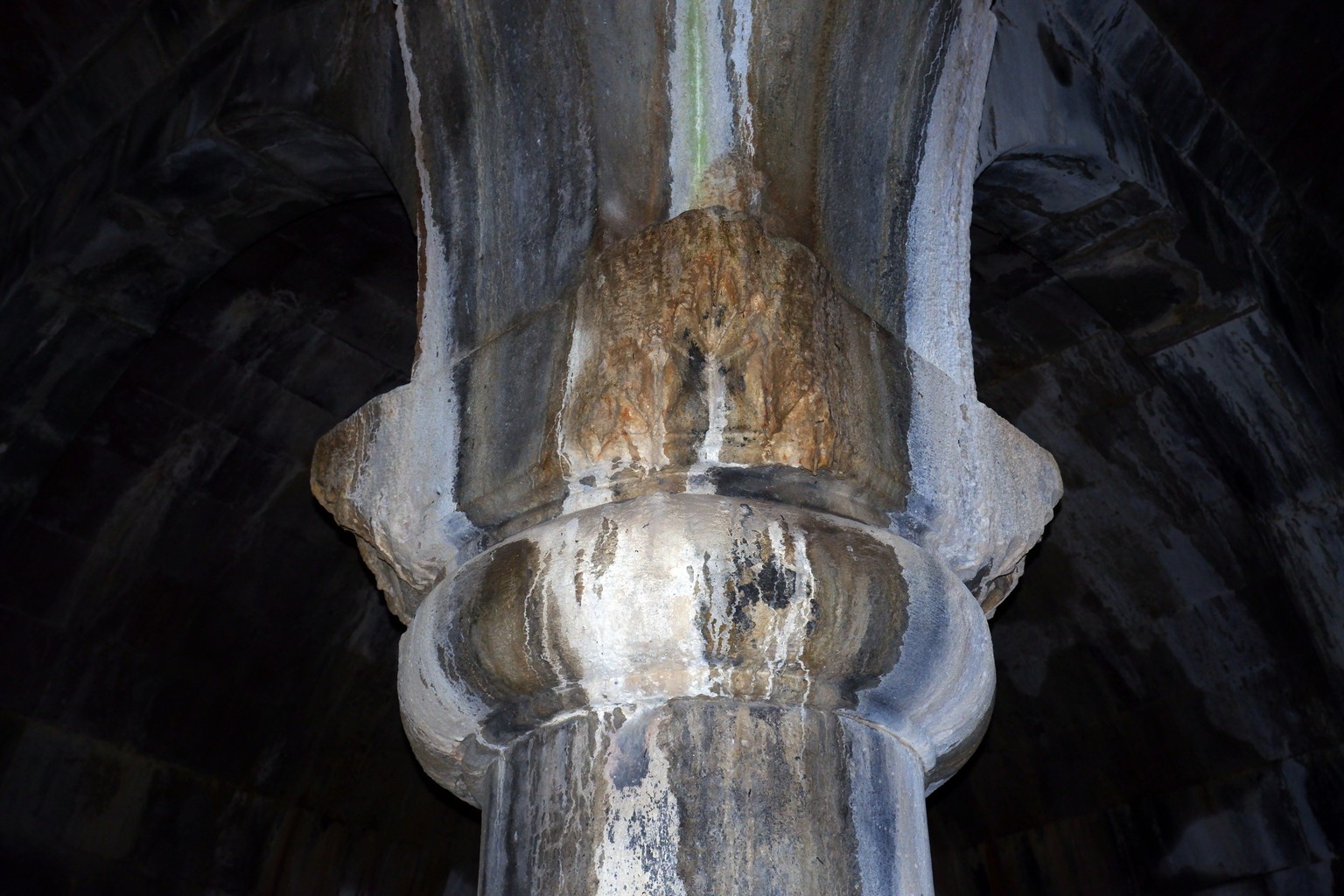 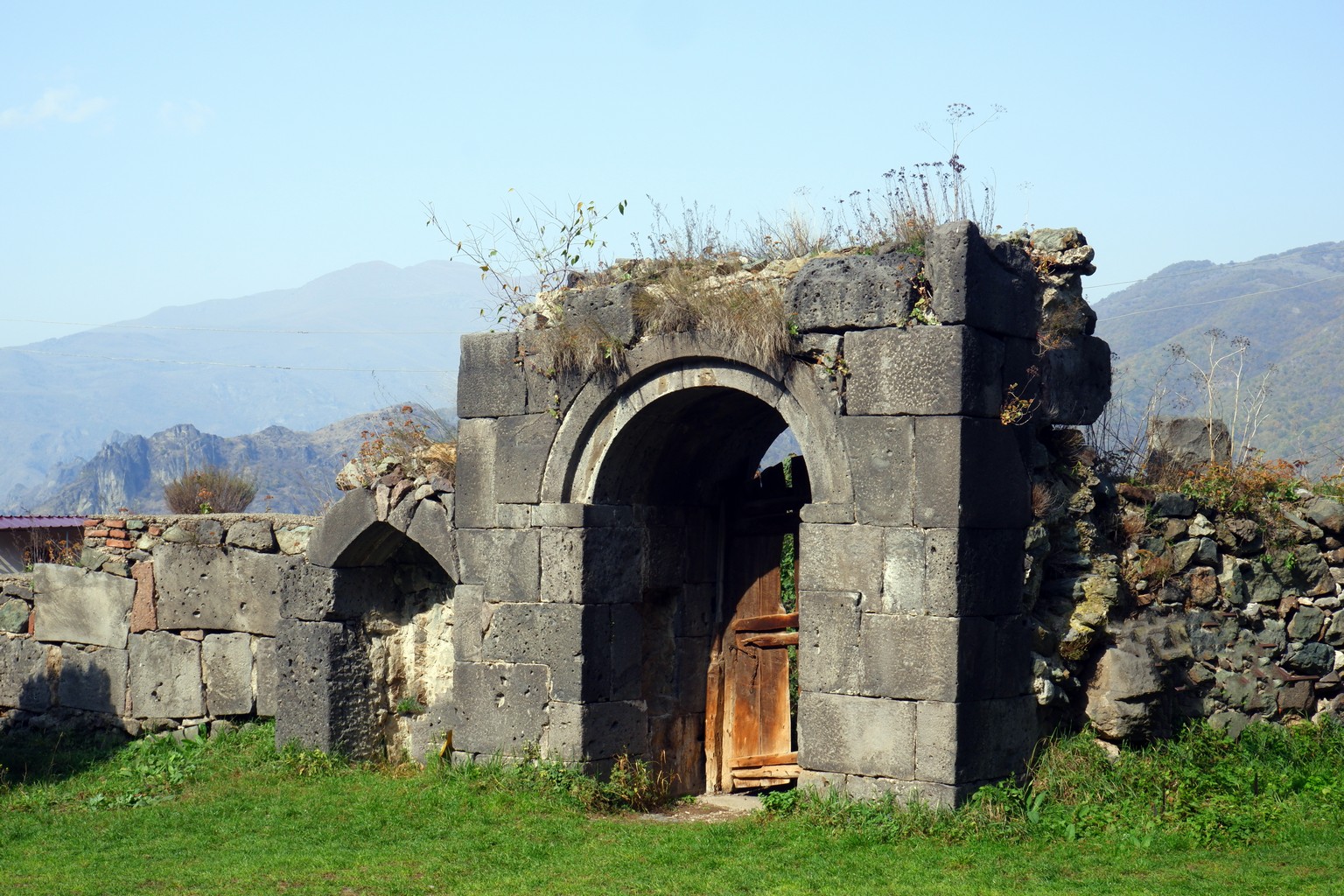 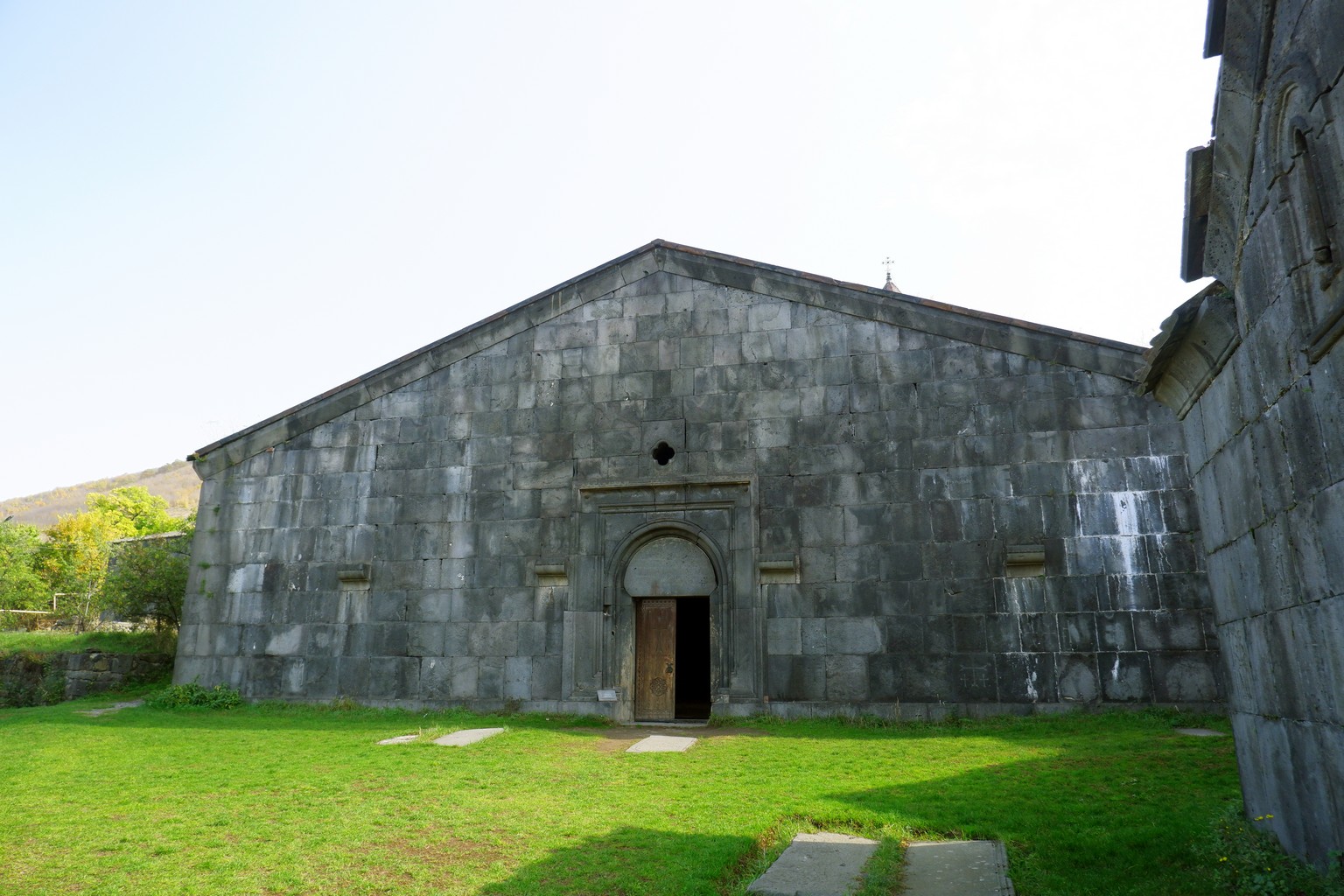 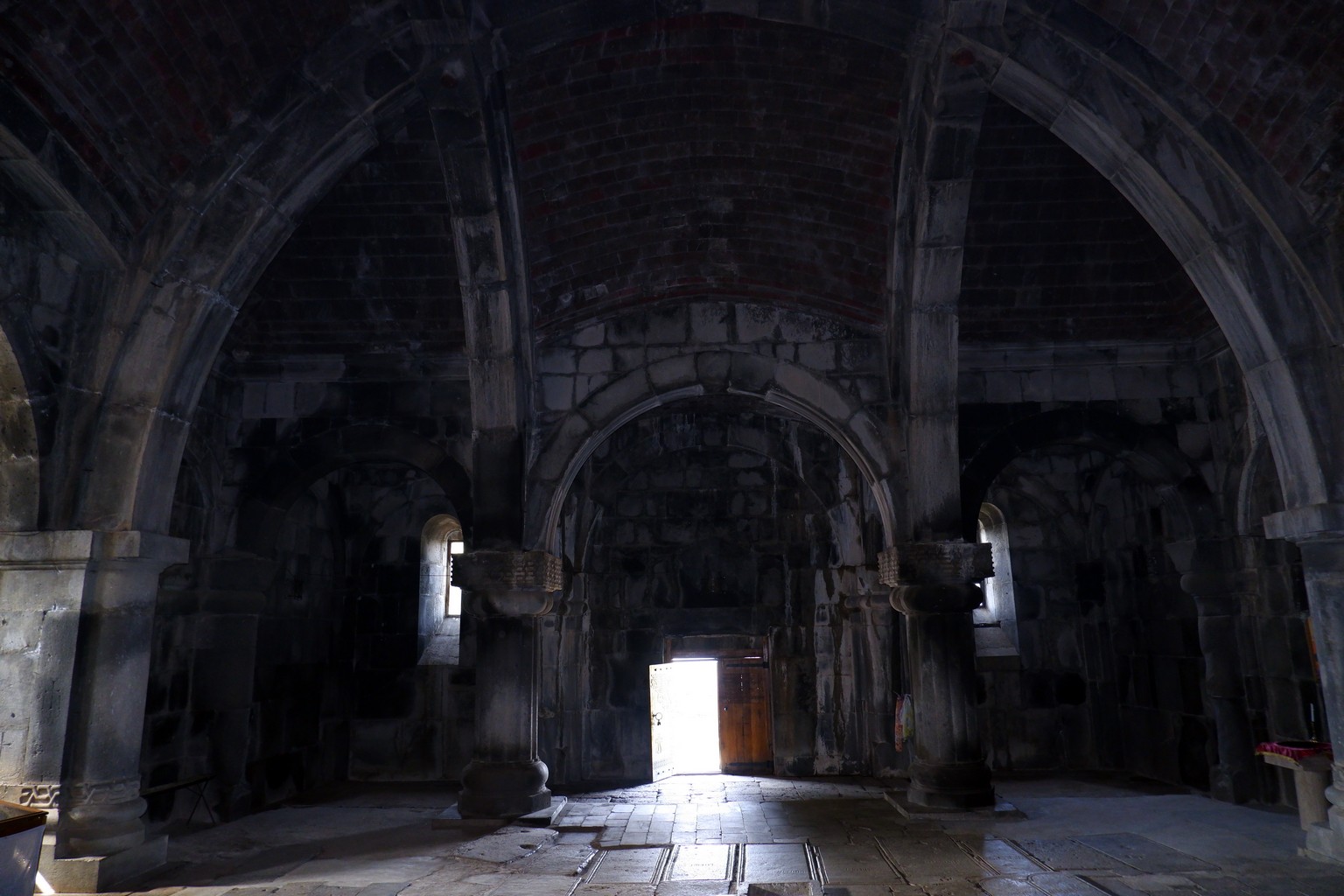 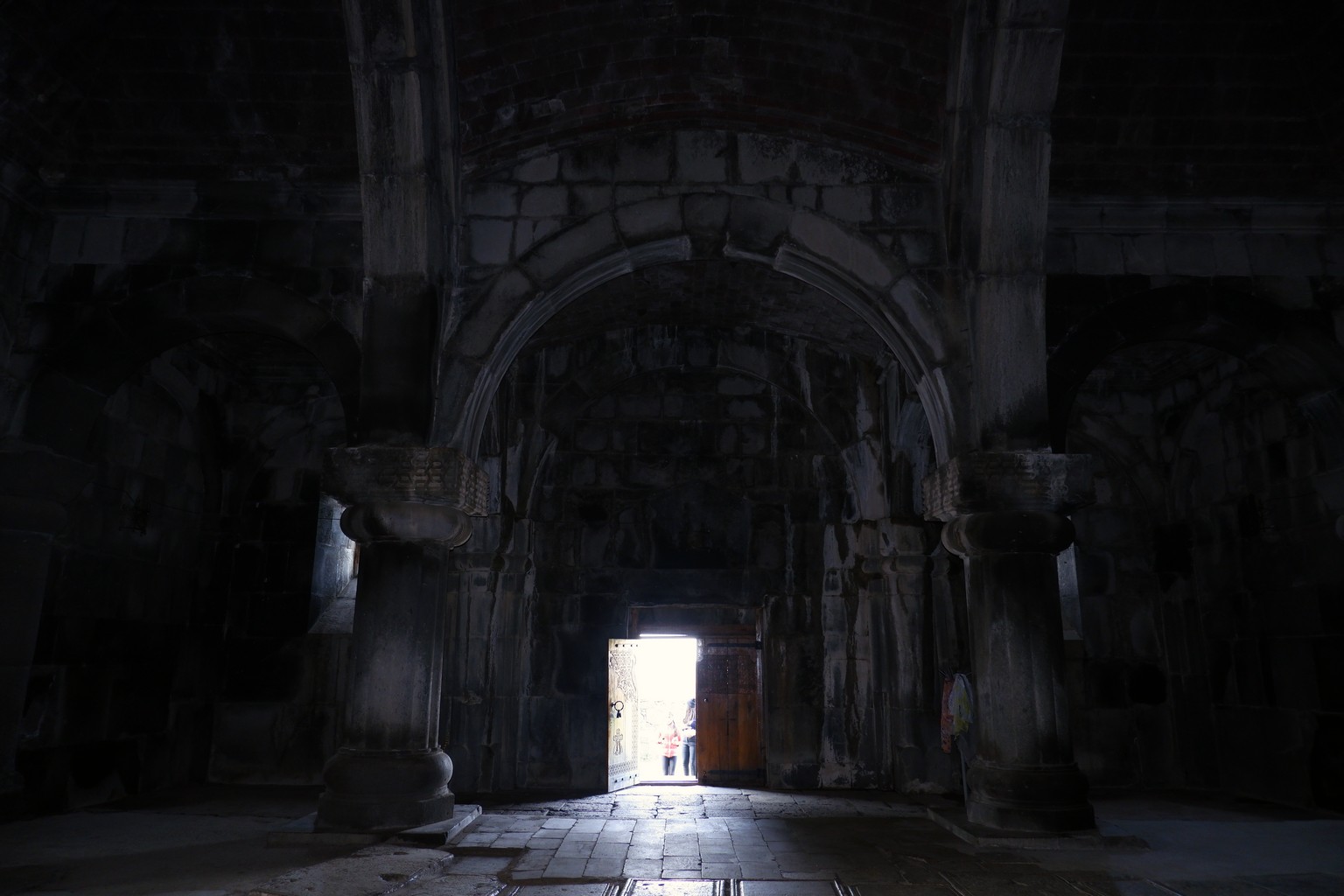 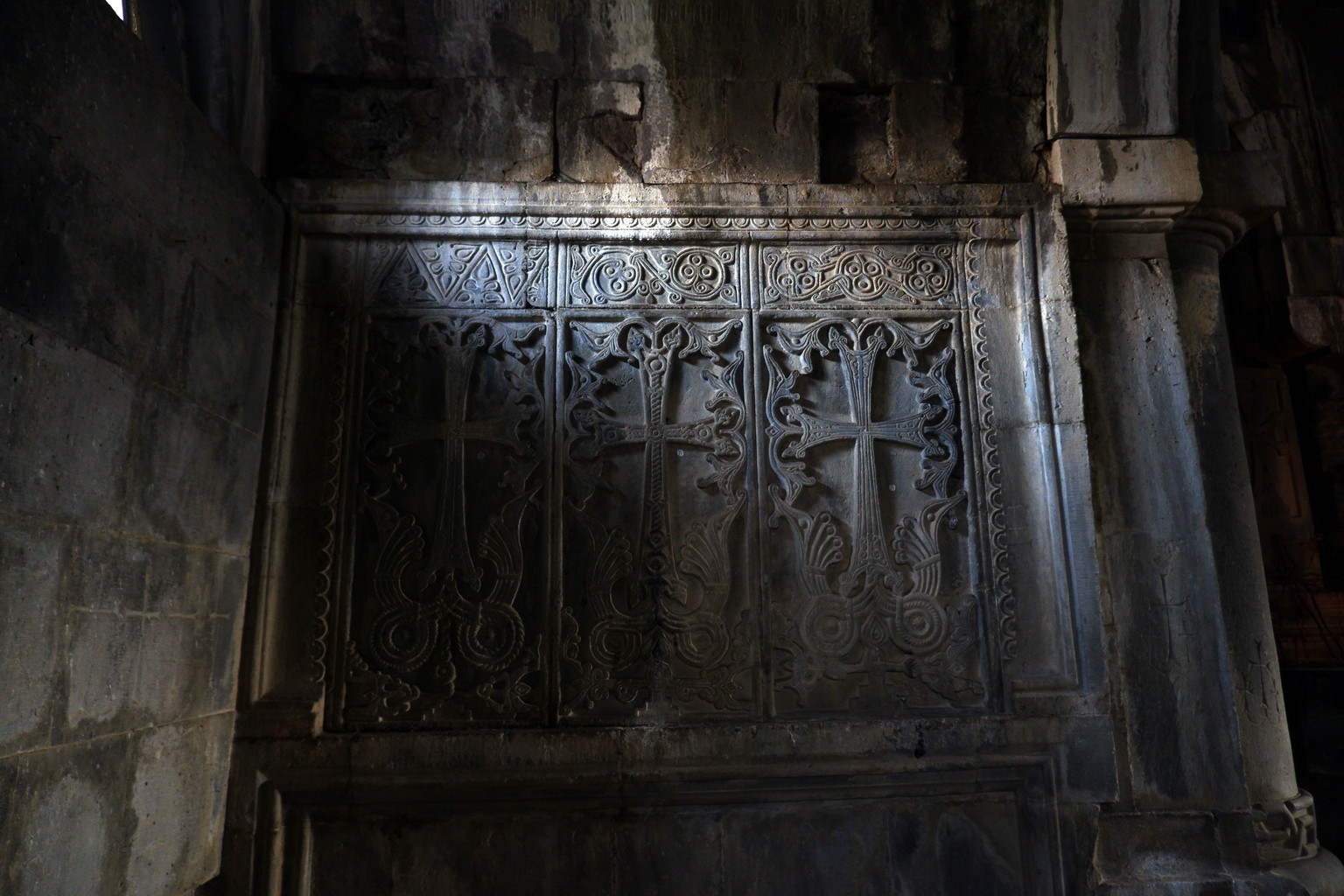 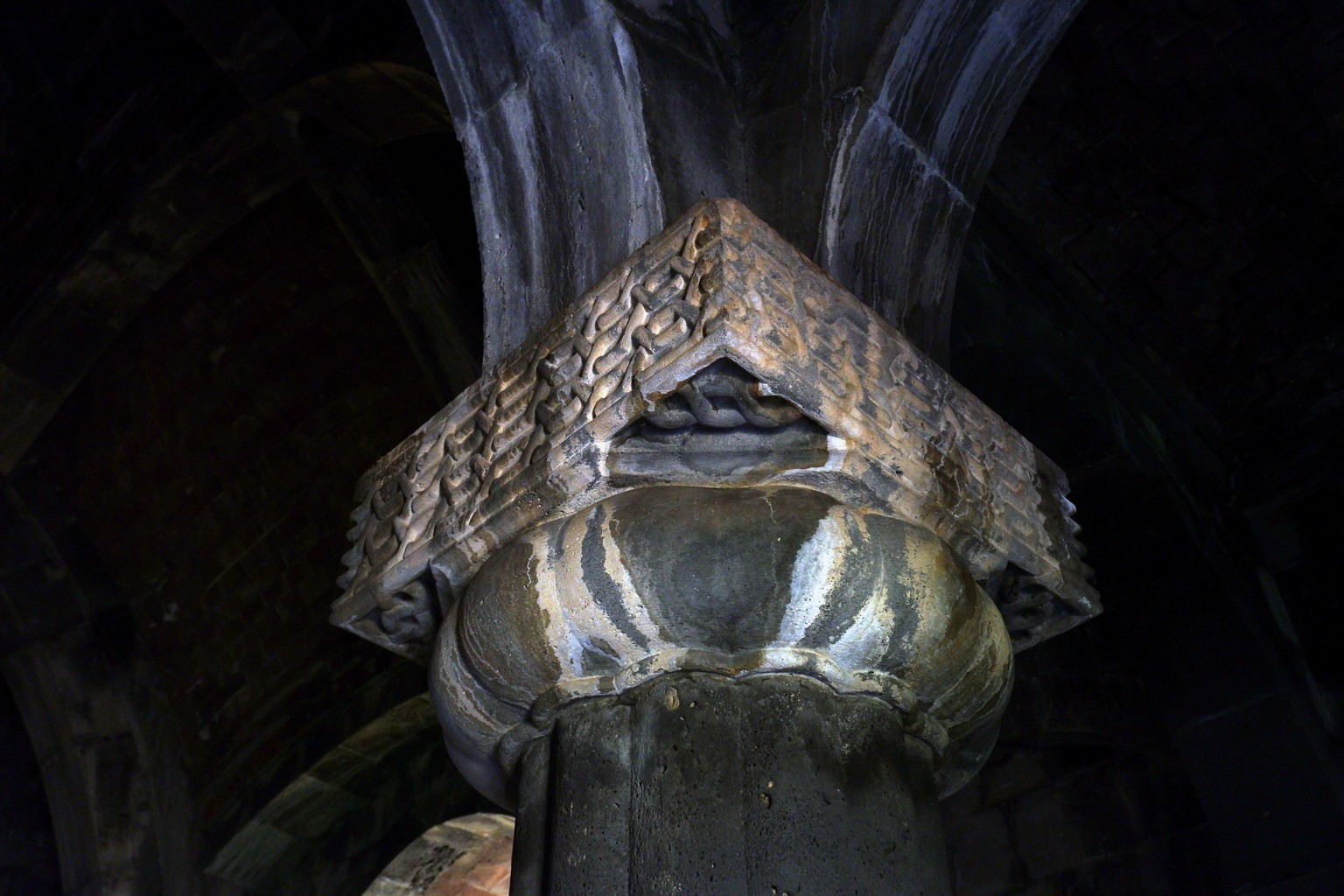 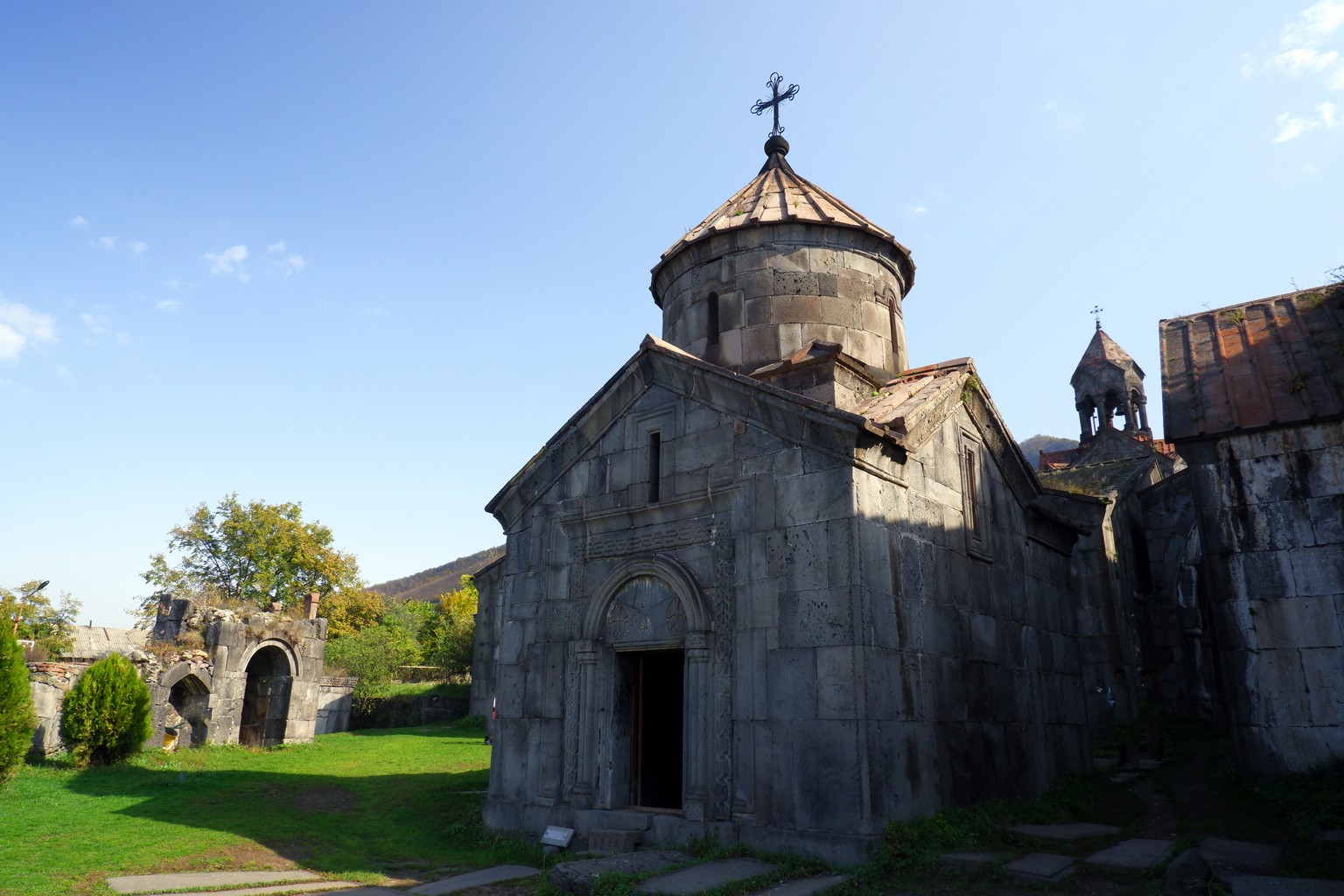 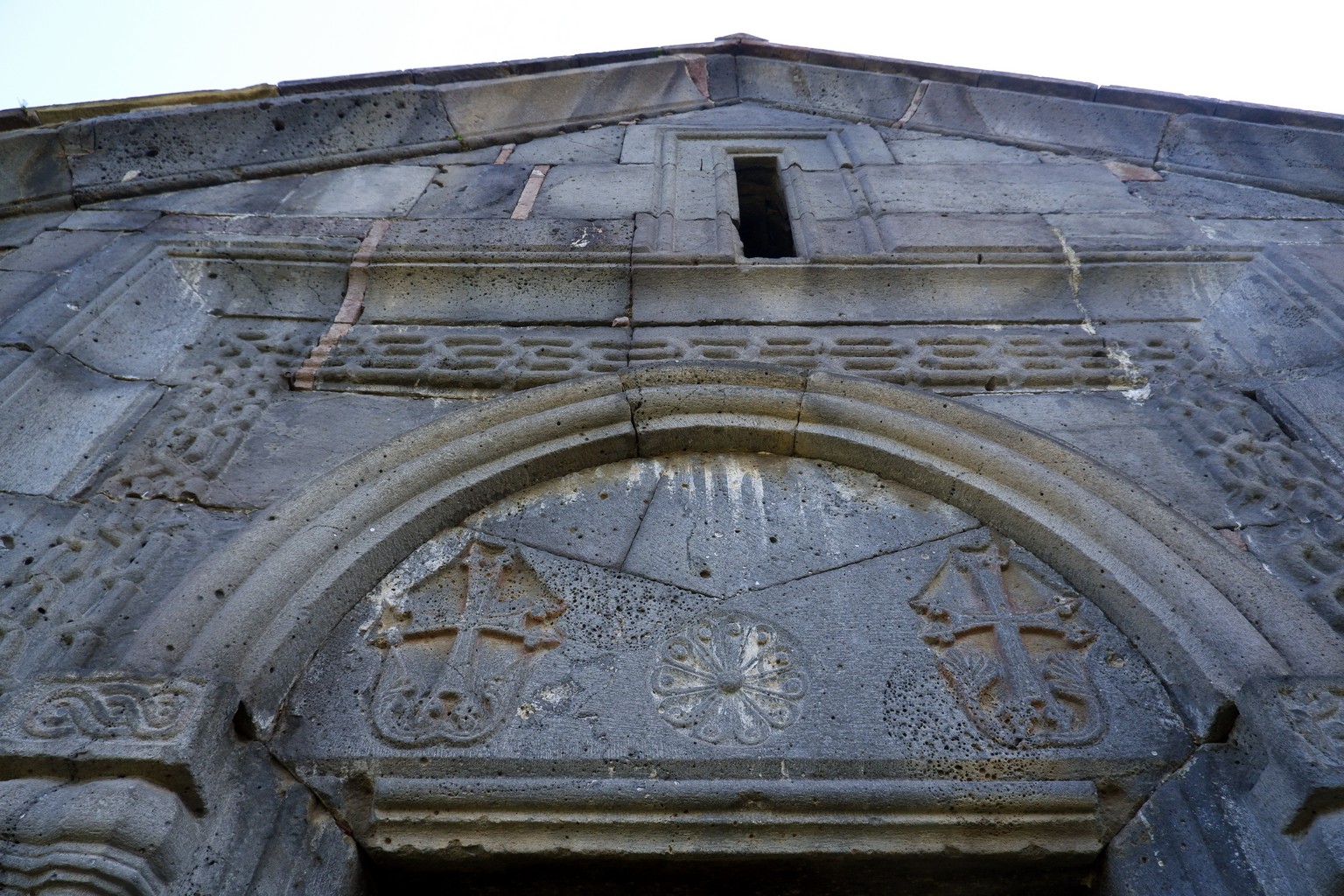 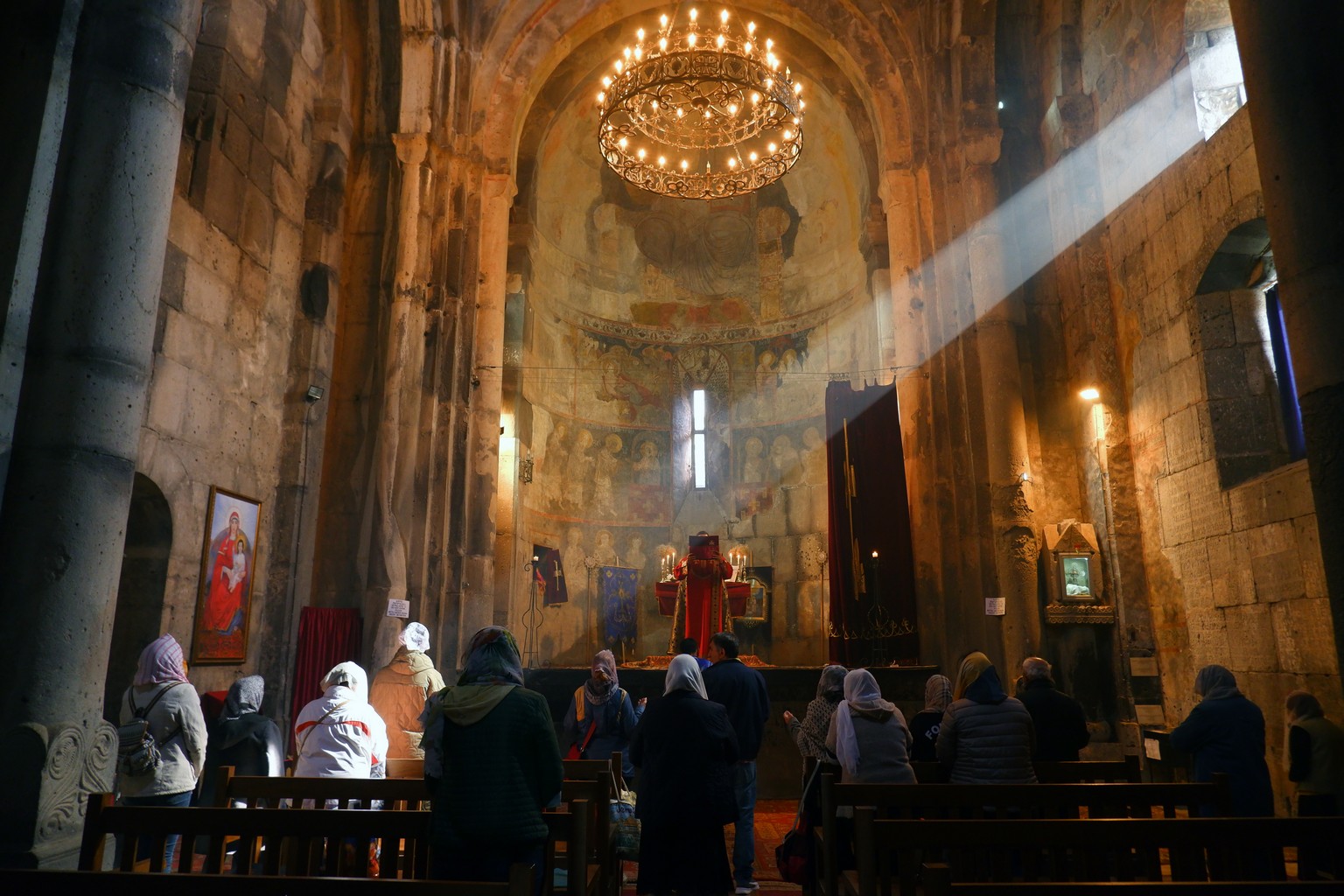 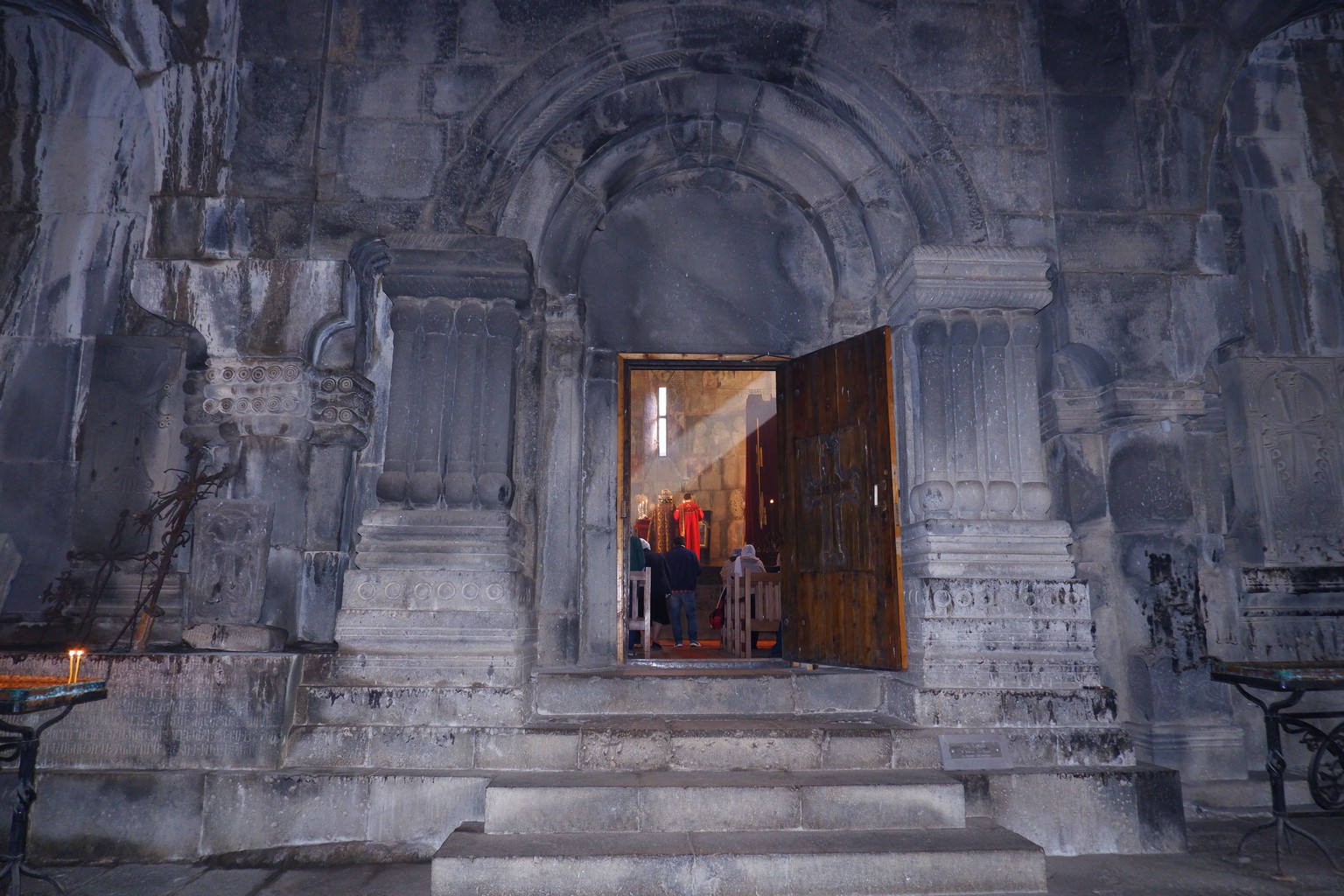 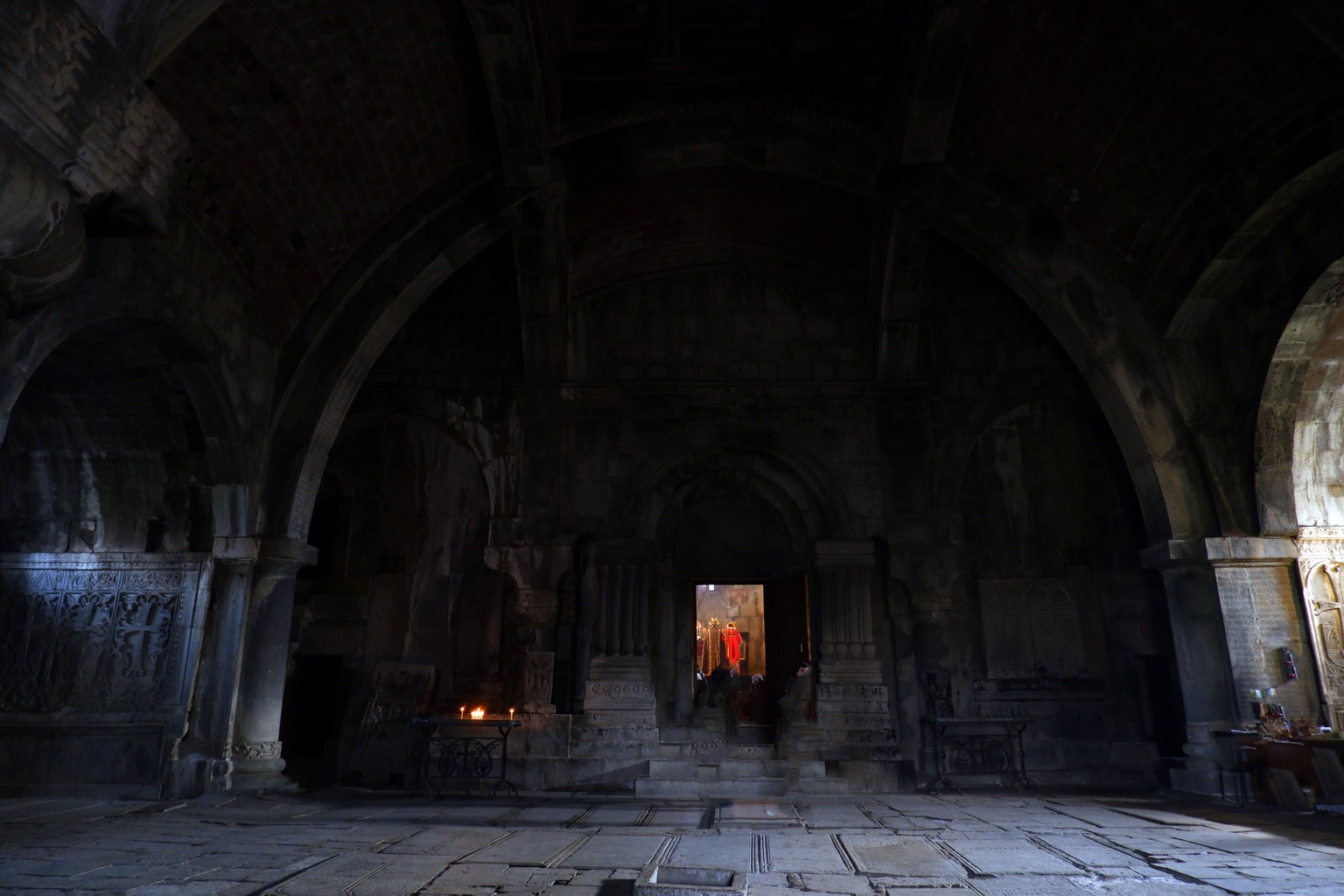 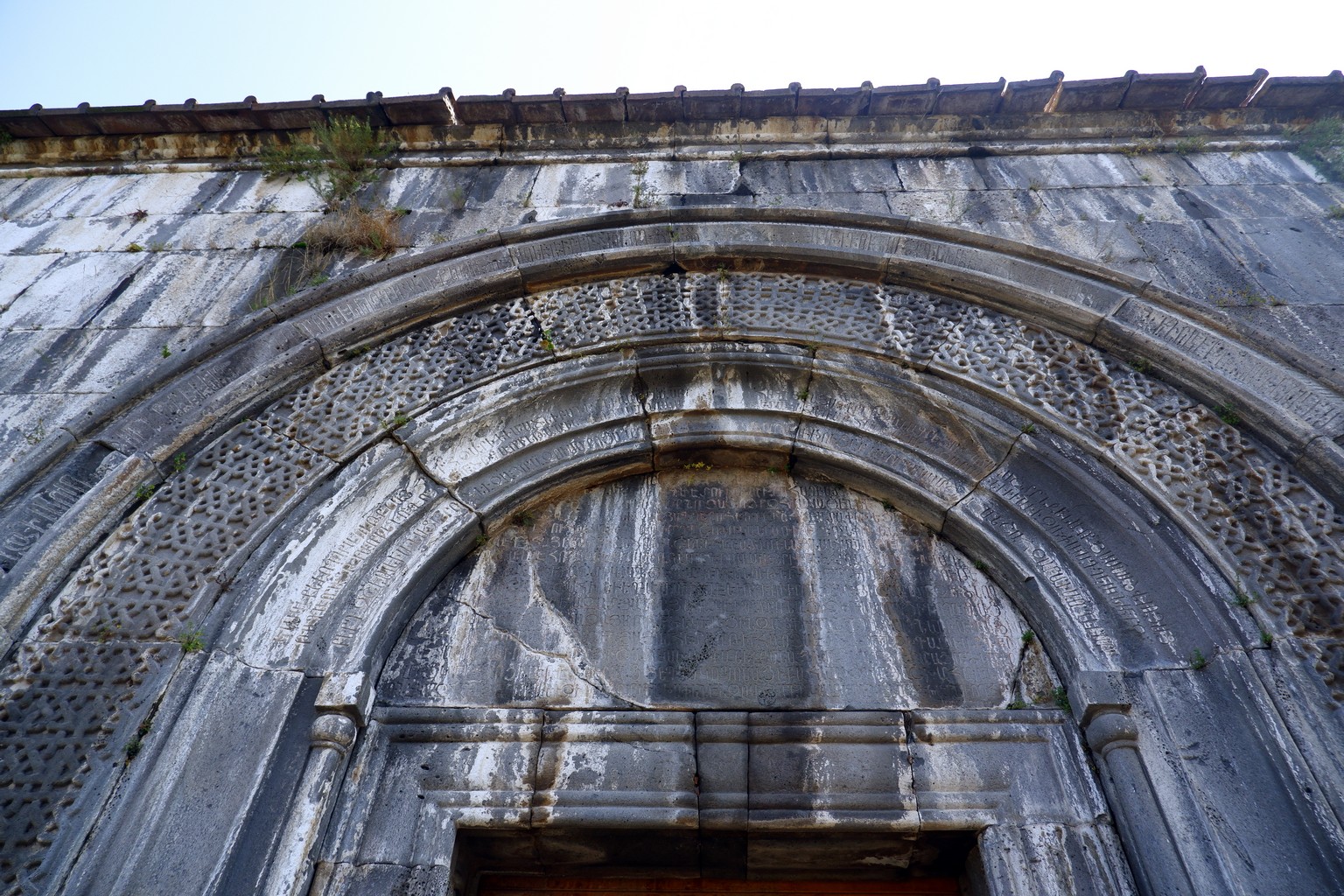 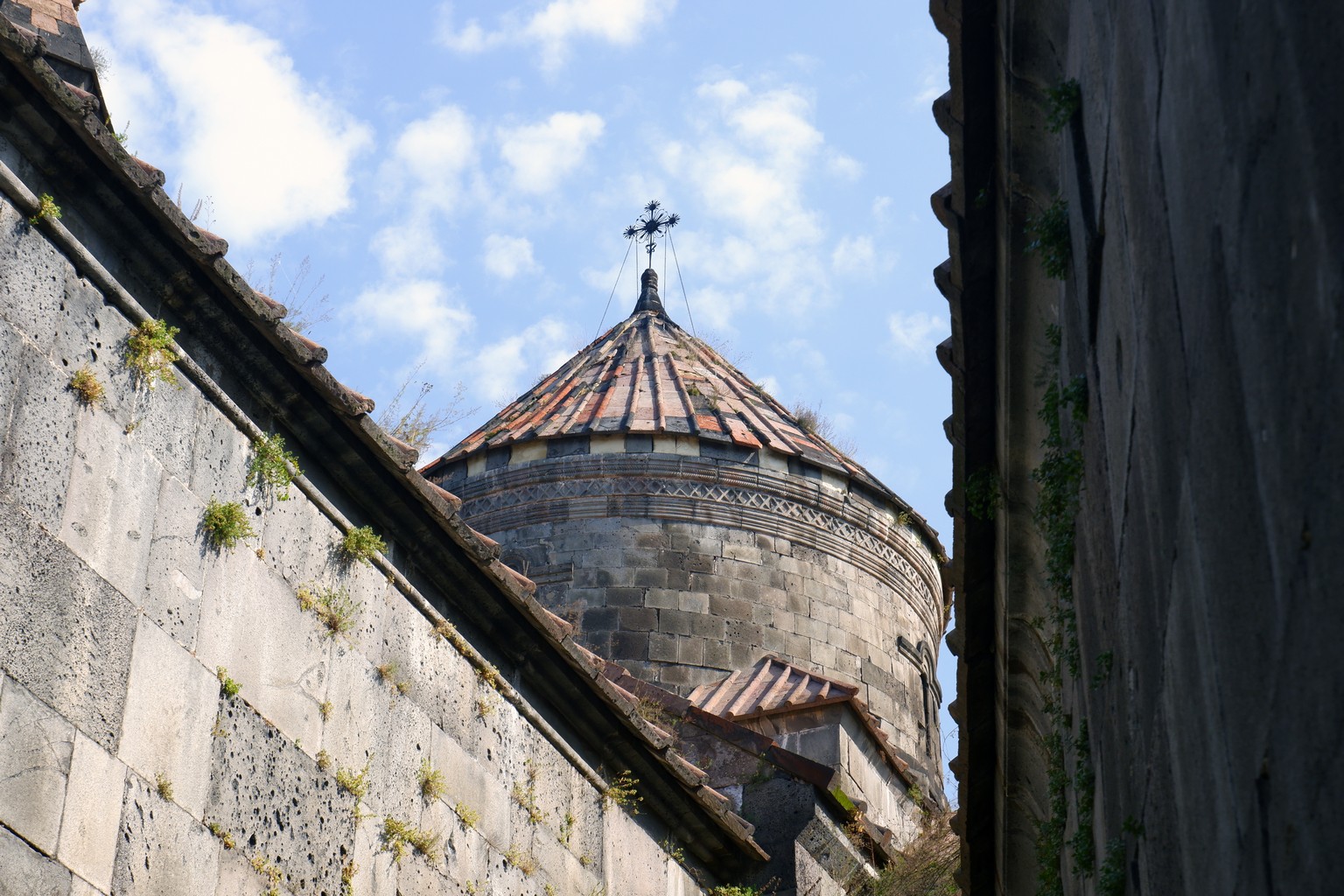 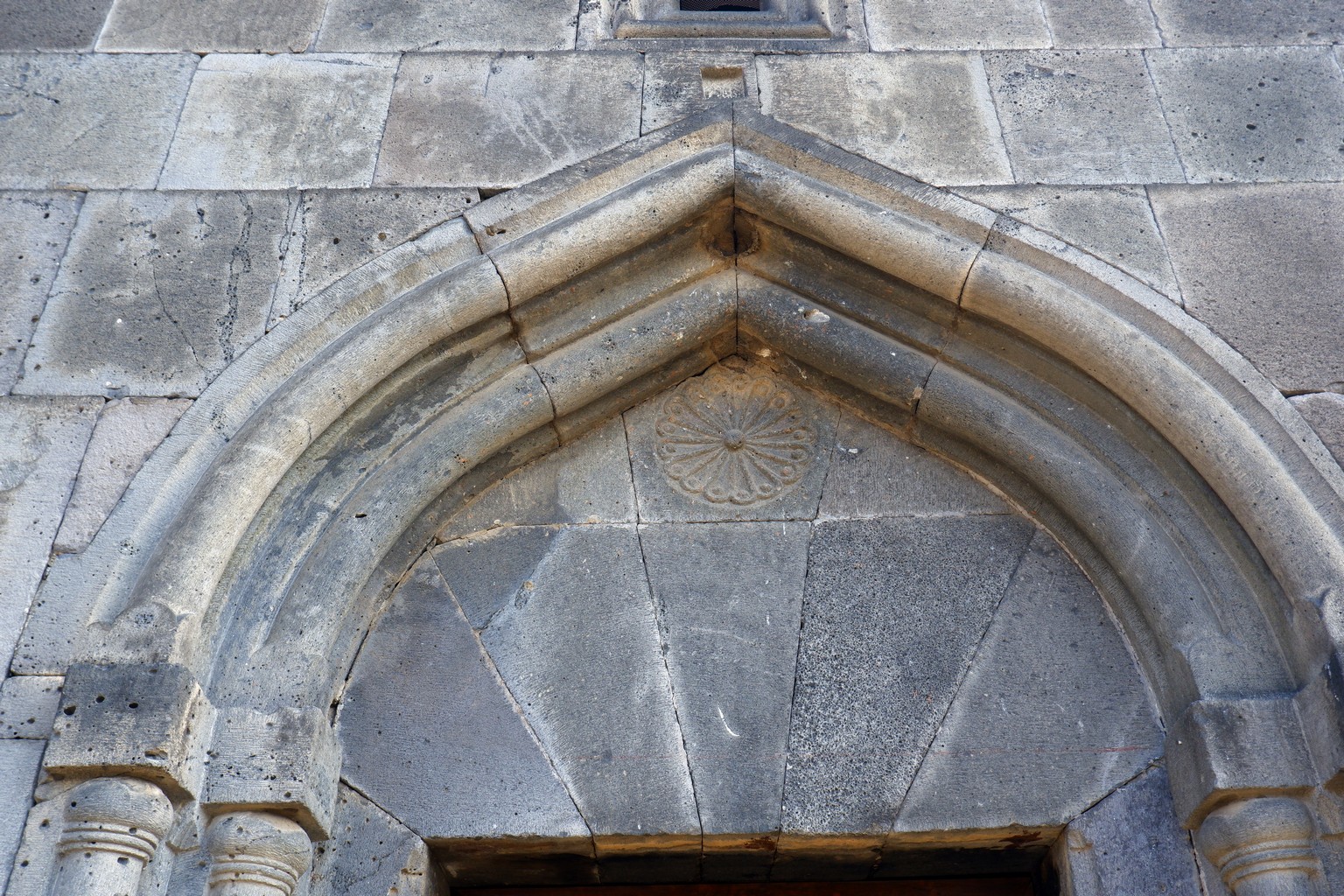 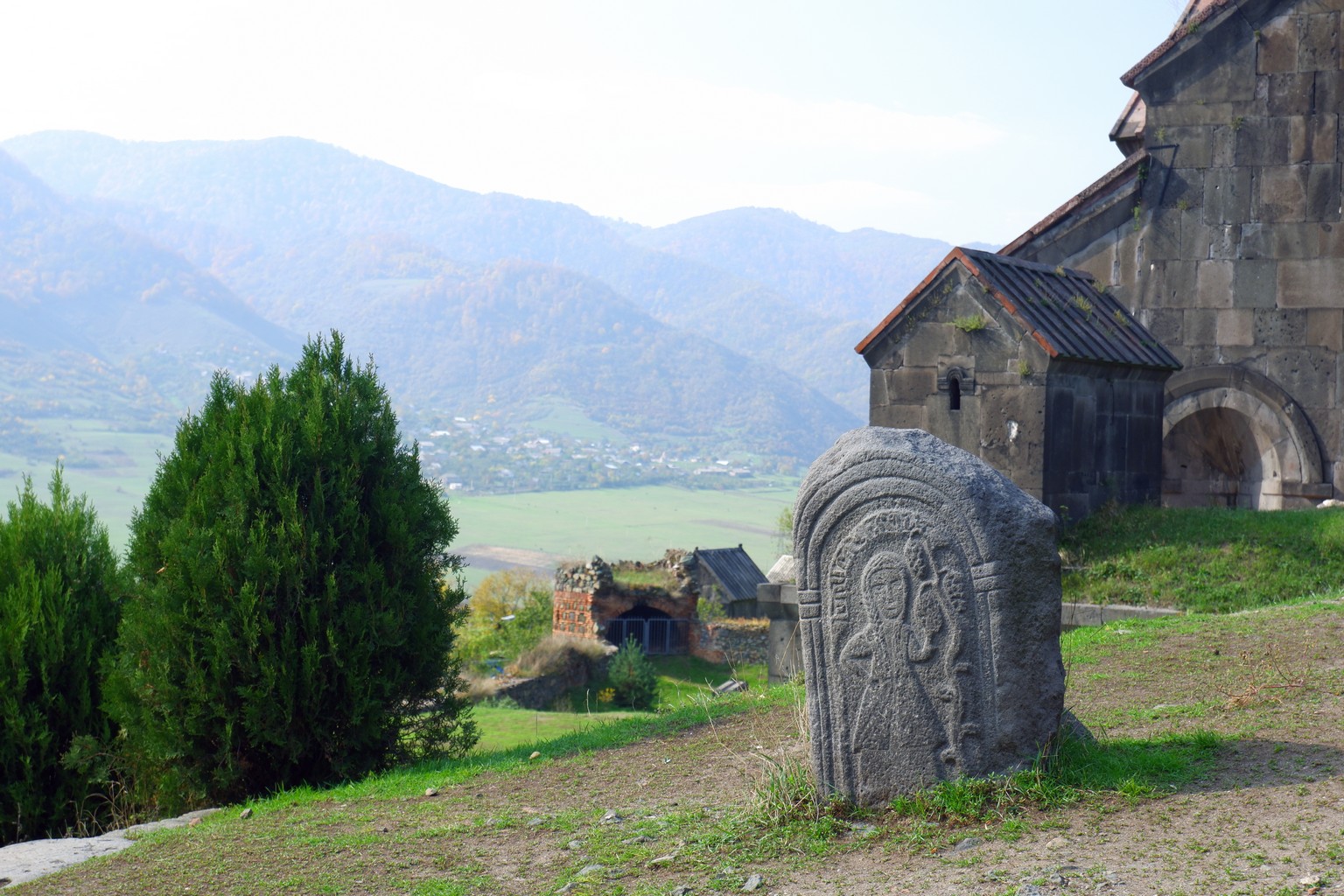 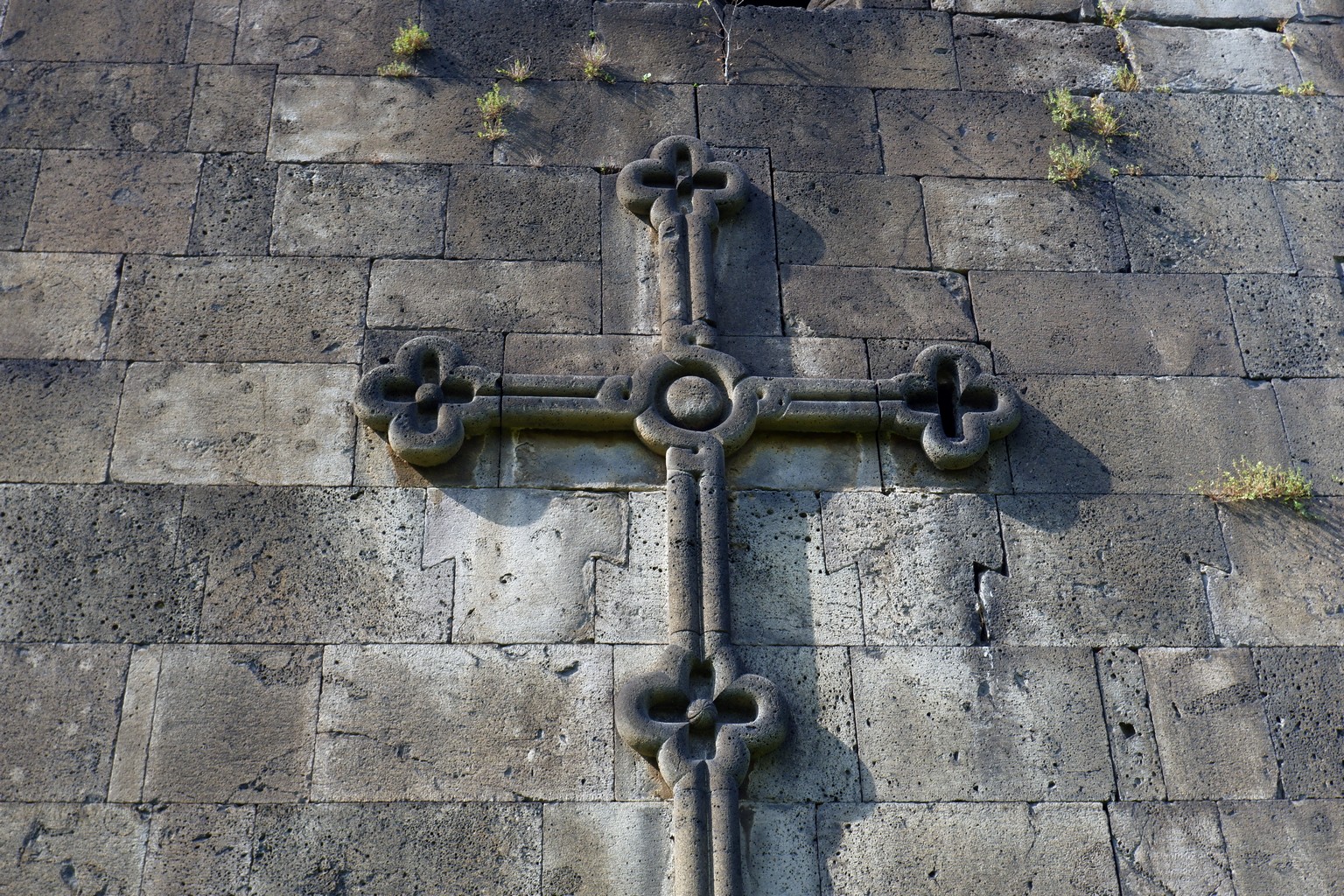 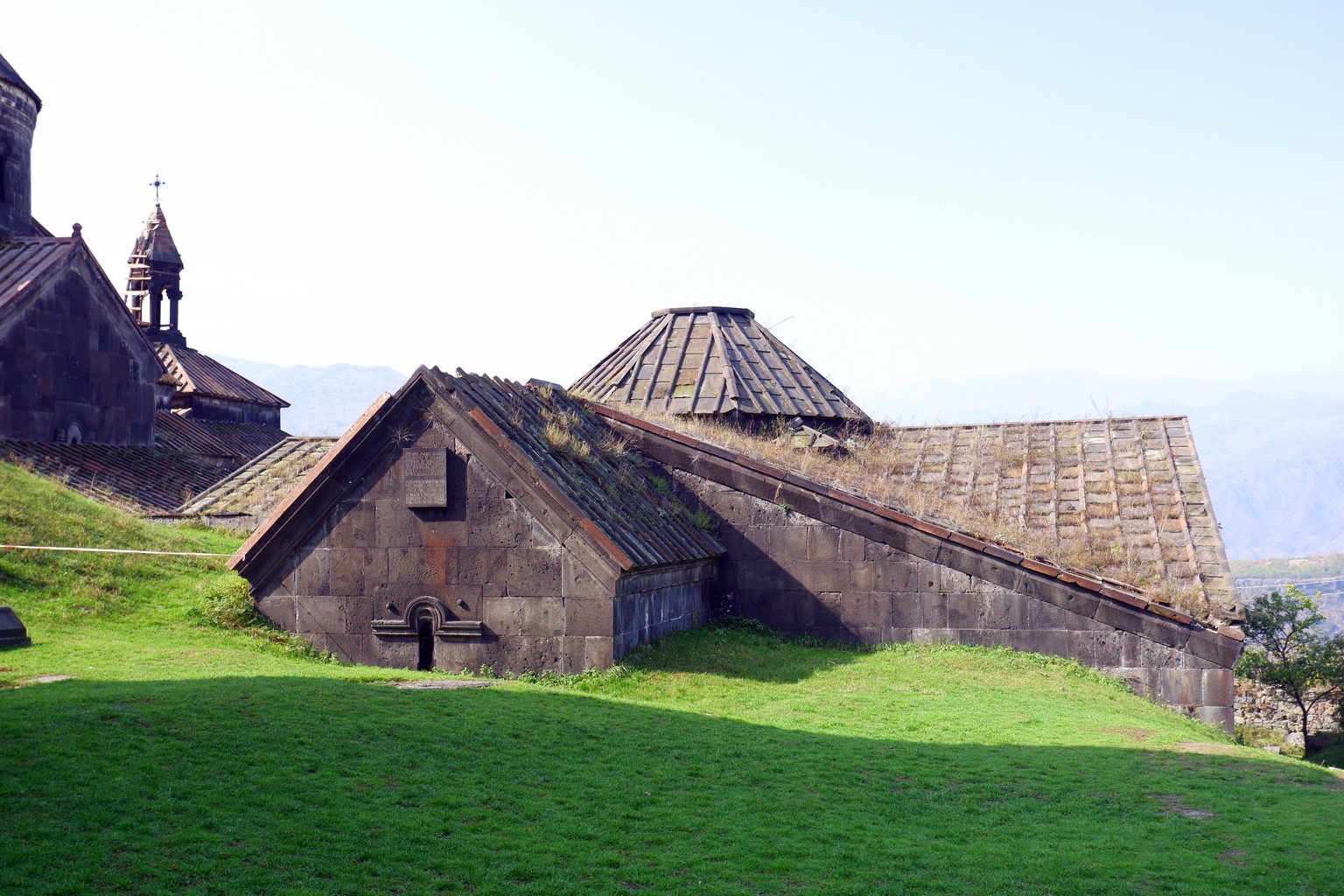 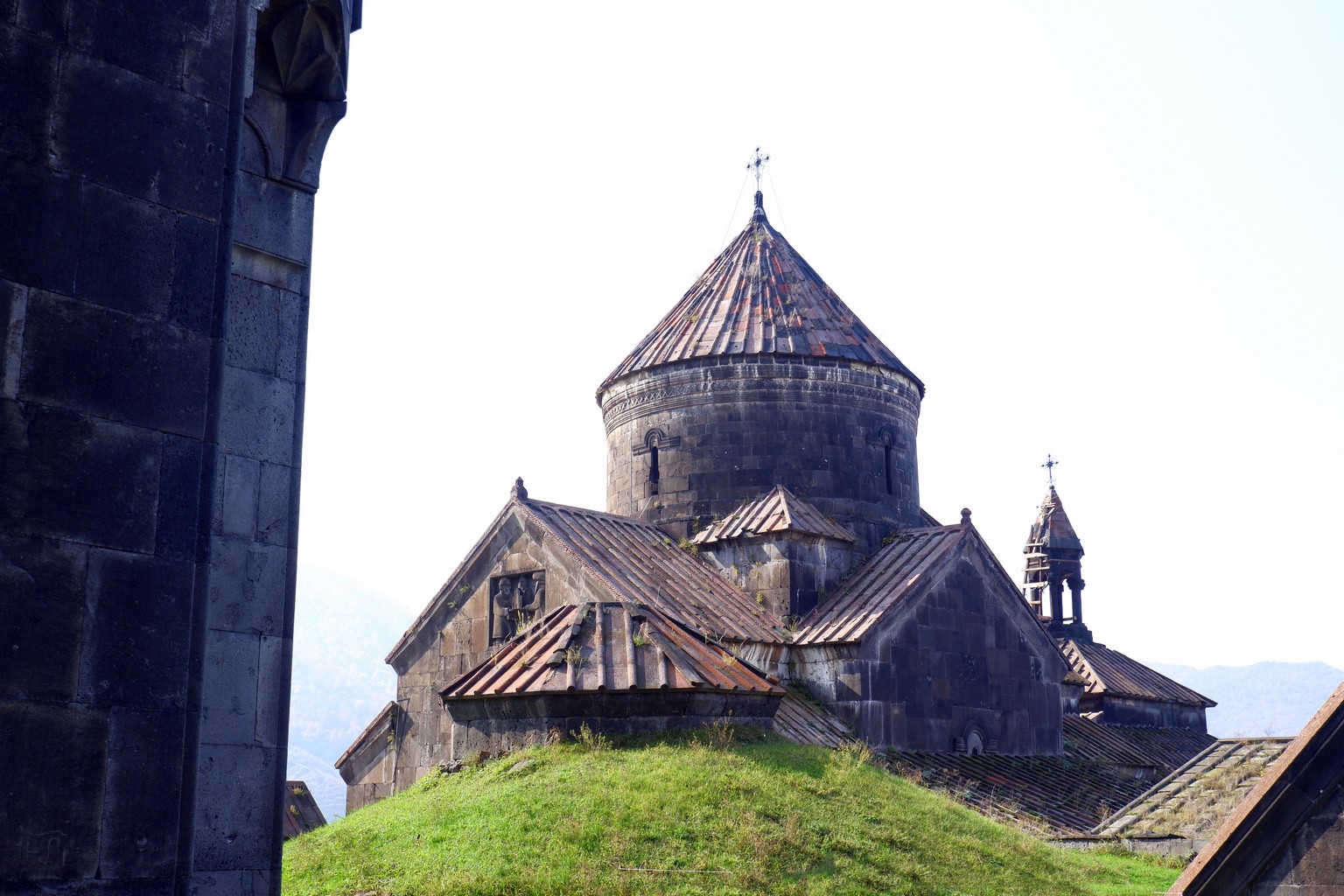 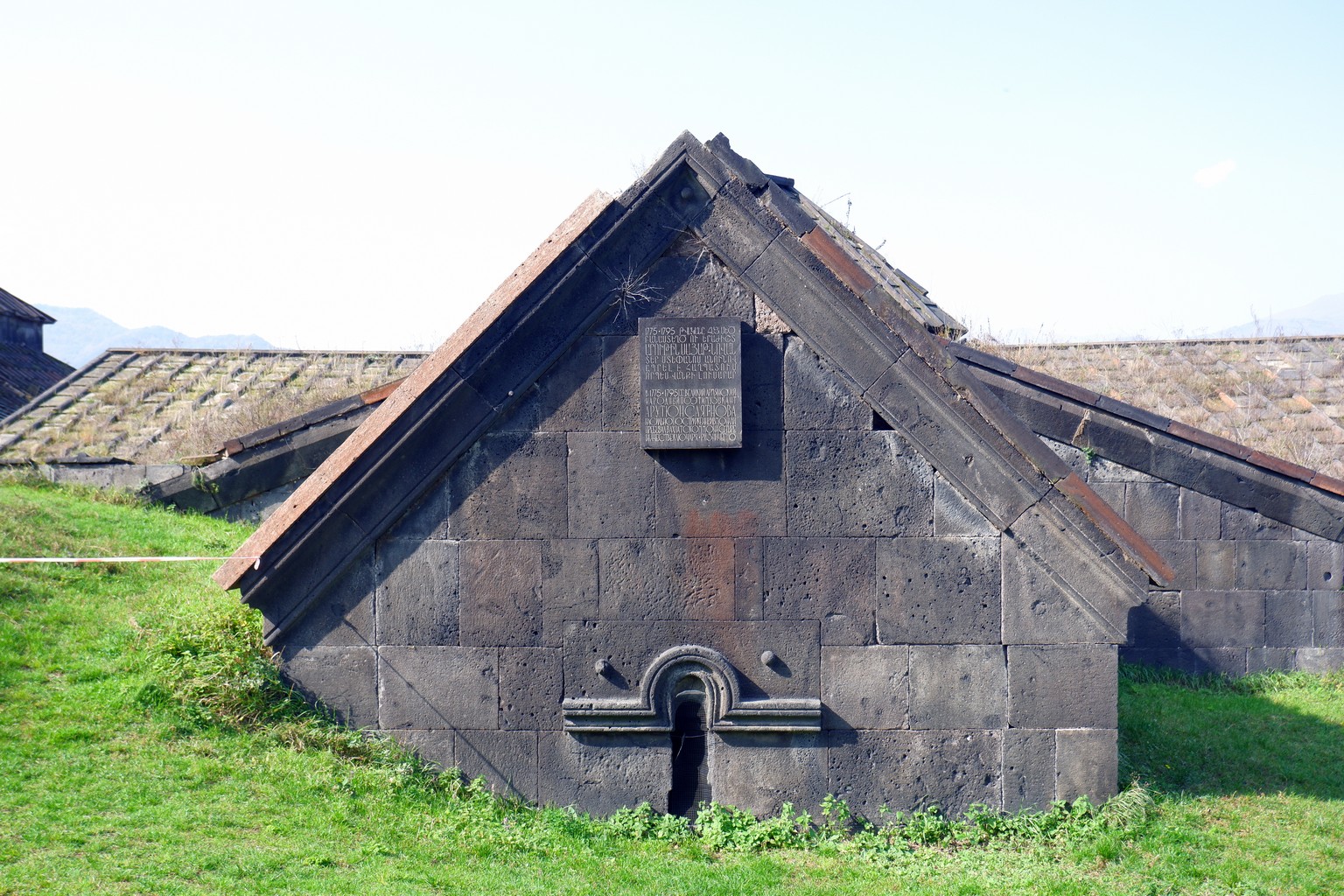 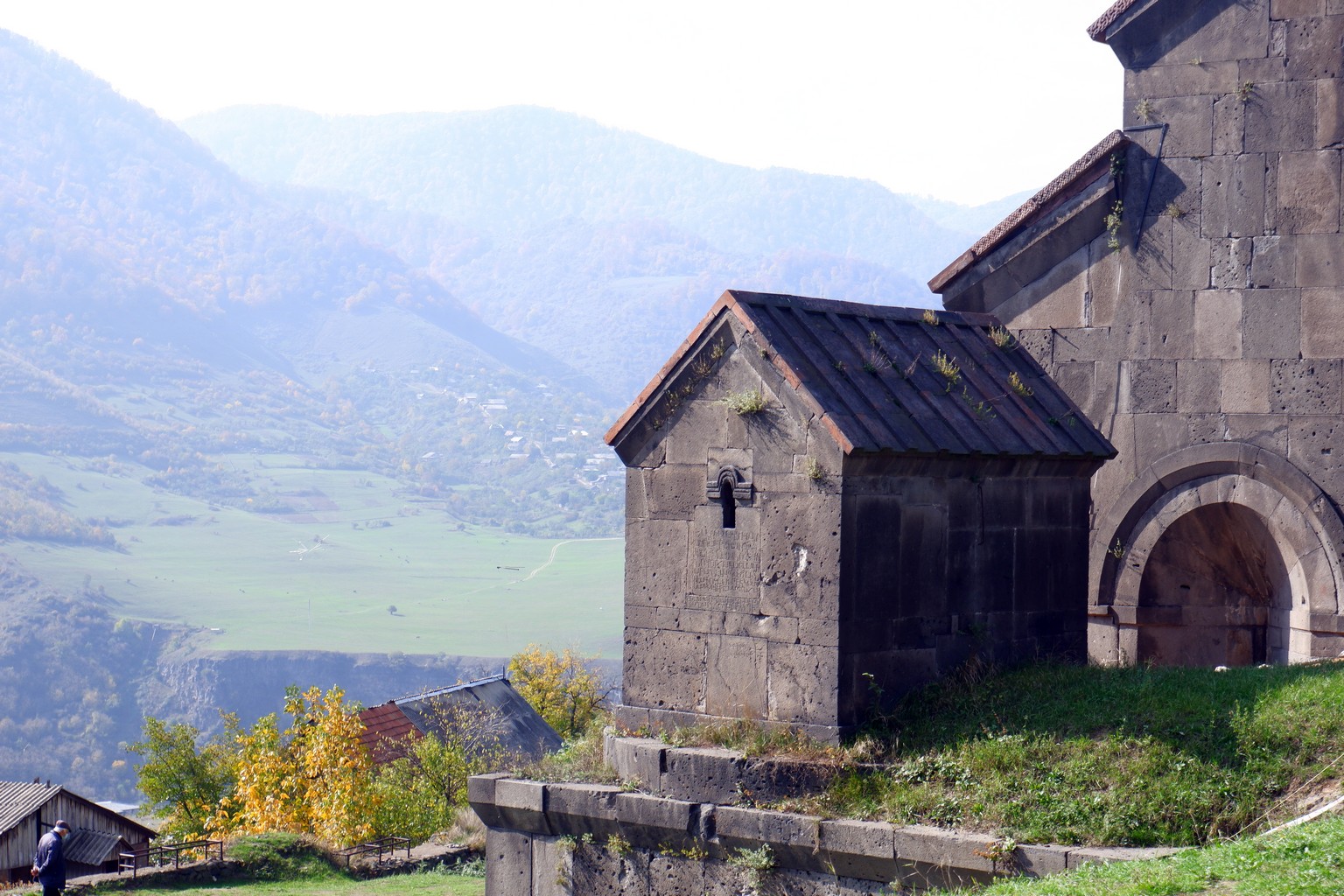 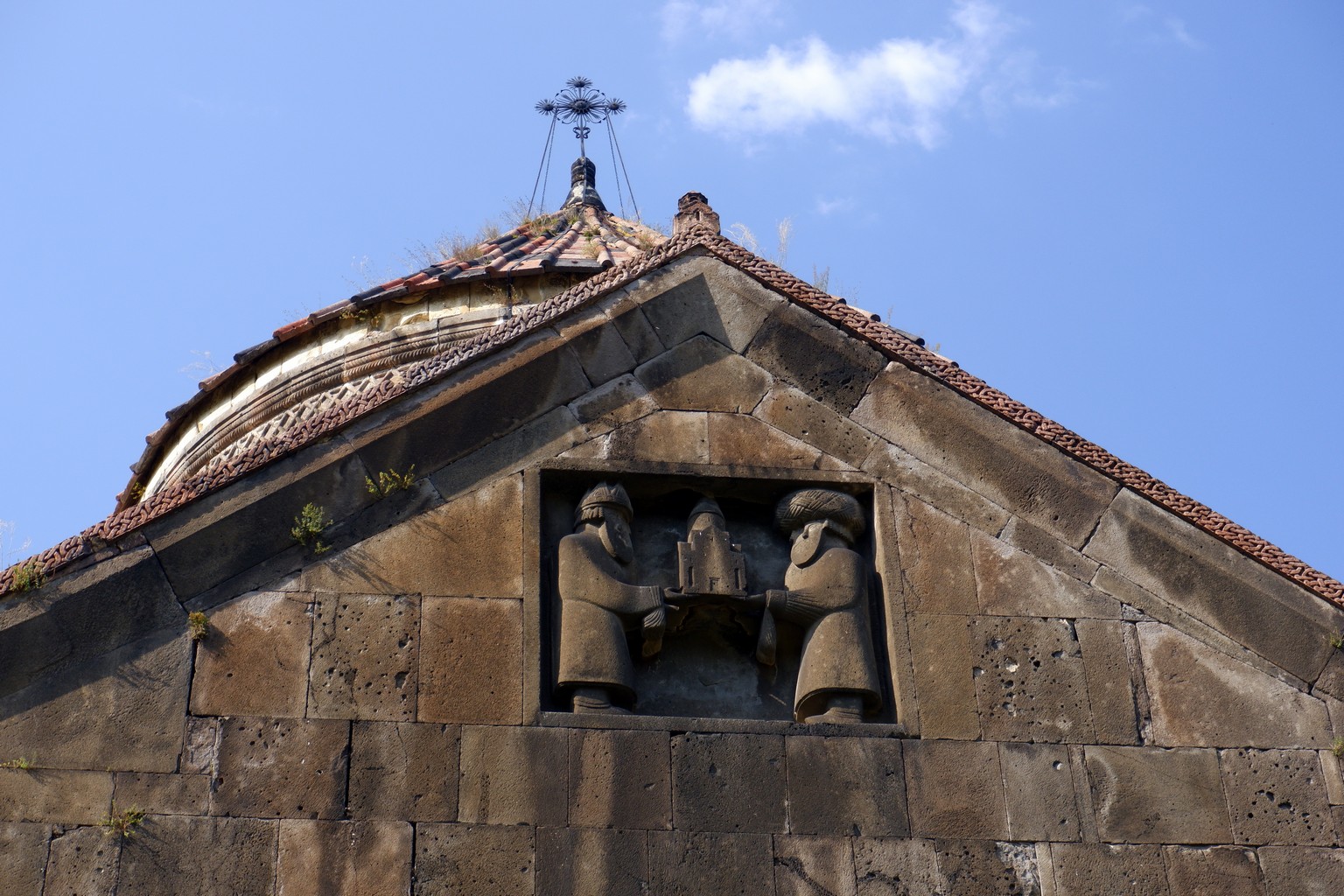 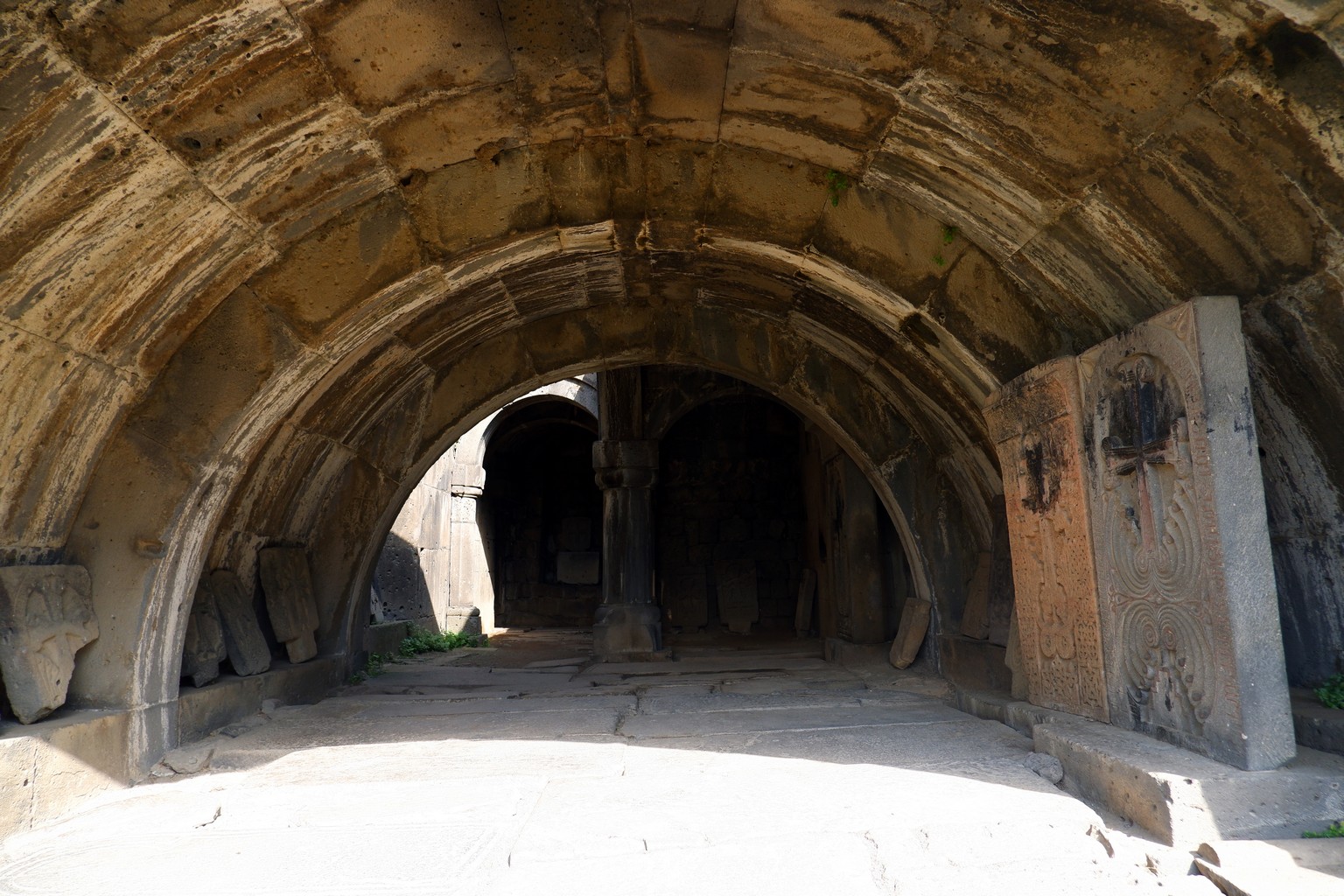 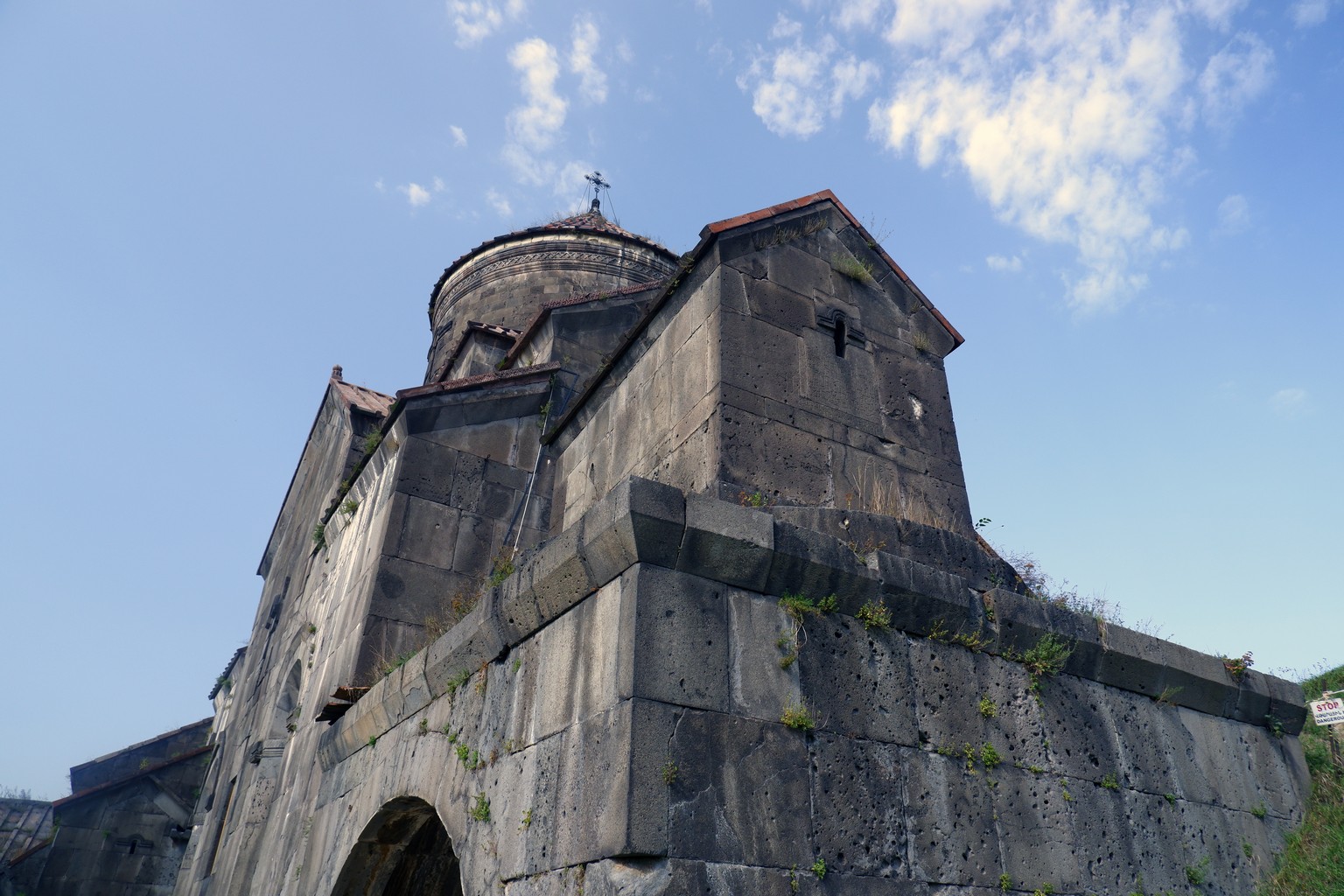 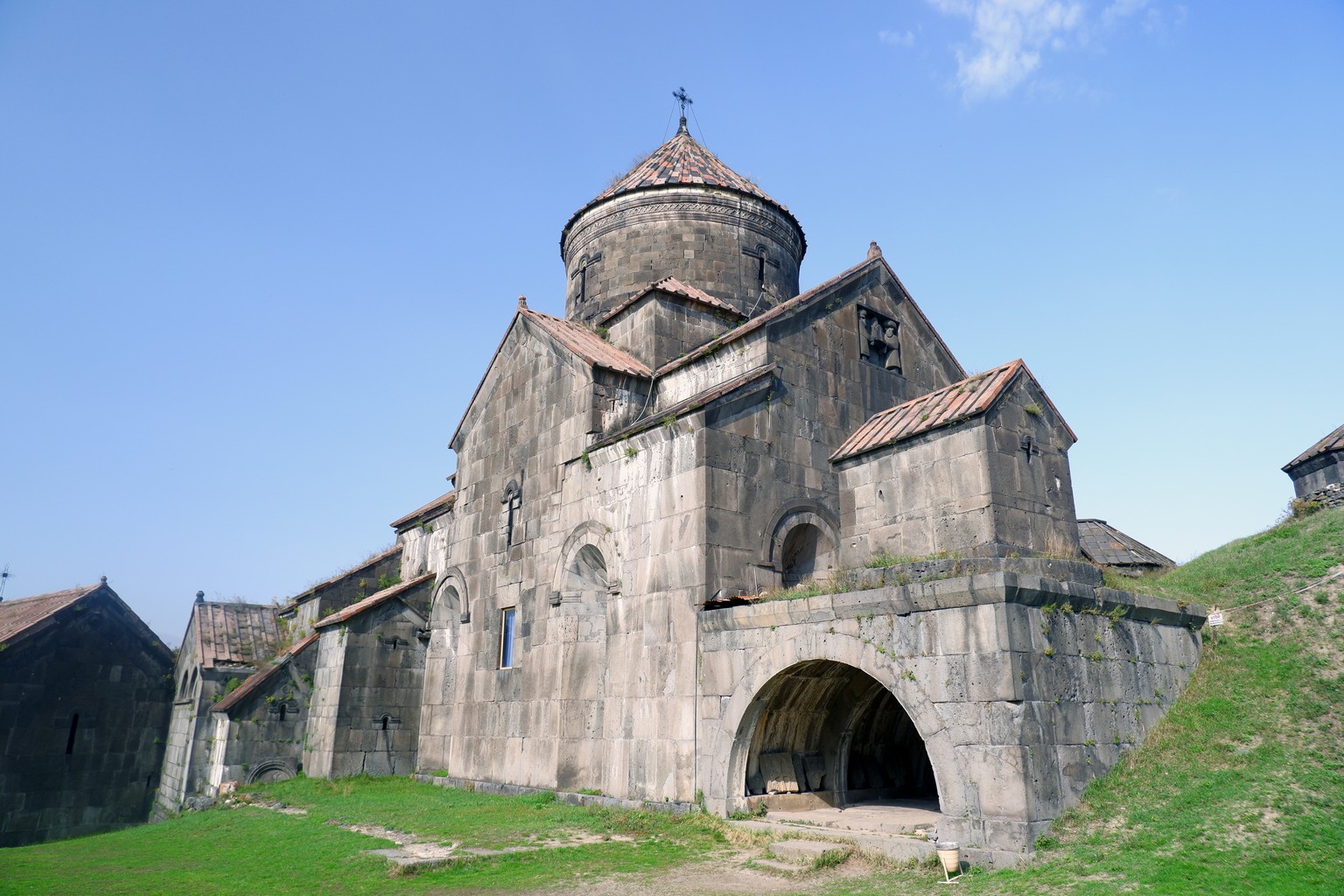 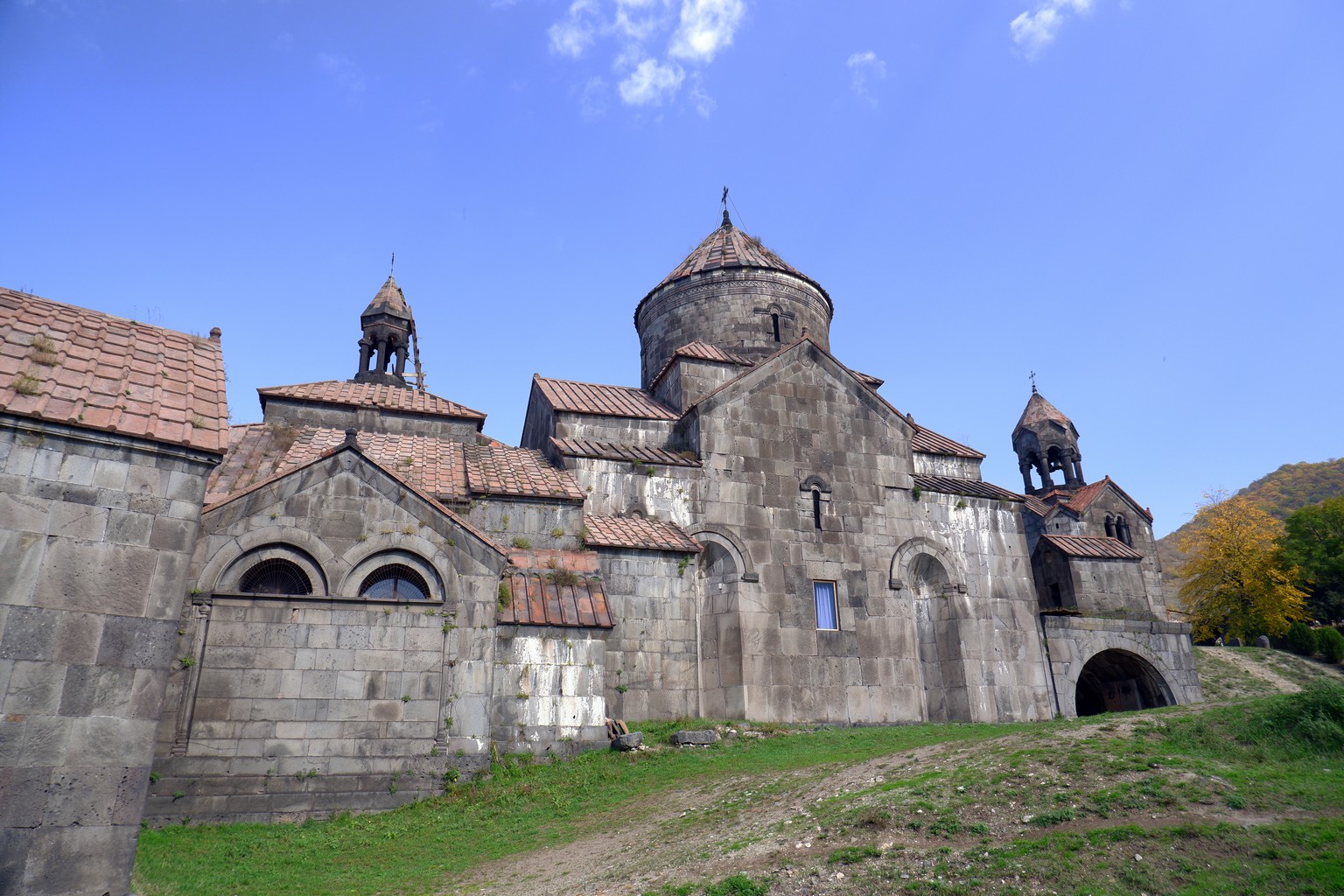 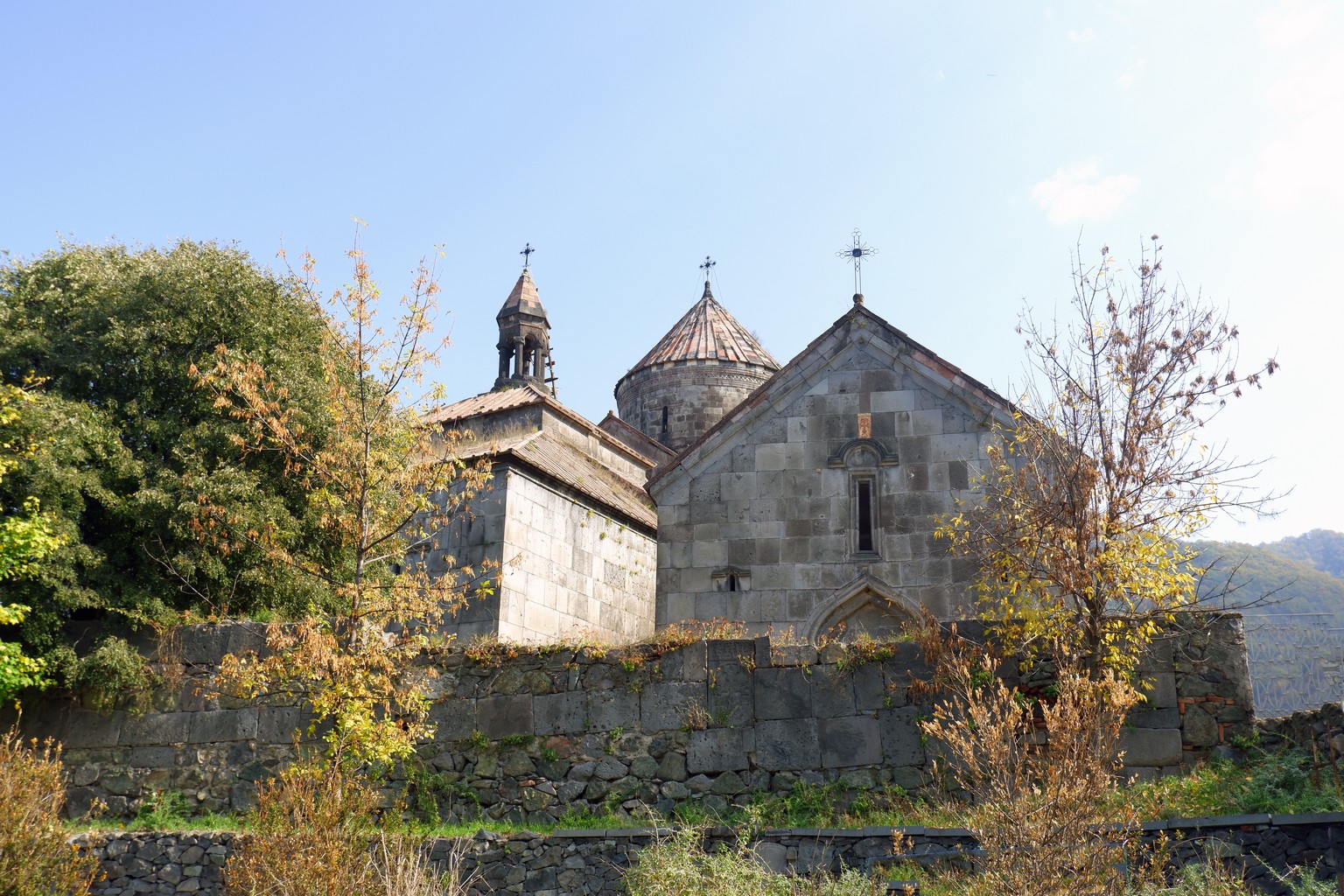 Hagpat was founded in 976 during the reign of Bagratit king Ashot III Voghormats (the Merciful) (in 953-977).  The monastery complex includes the Cathedral of S. Nshan, two gavits (vestibules), three small churches, two tombs, a refectory, several chapels-tombs, and khachkars, which stand out for their brilliant fictional ideas, architectural and artistic perfection.  Among the treasures of the Monastery are many of the best works of Armenian sculptural, mural, khachkar, and other arts.

The name Haghpat is etymologically translated as god-walled, god-built, protected from ambush or trap, and more likely “hakh pat” meaning a strong wall.  The following legend version of the name’s etymology is noteworthy.  “A prince calls a craftsman to build a monastery.  The master comes to Sanahin and starts working with his son.  At work, a dispute arises between a father, a son, and a sub-master.  The son stops working with his father and builds a new monastery with the sub-master in Haghpat village by order of another prince.  When the walls of the new monastery are raised, they notice from Sanahin that a structure is going up in front of them.  The workers report this to their master.  On Sunday, when everyone has a rest, the master father comes to his son, approaches the walls of the half-built monastery, and takes a long look.  Everyone silently waits for the master’s assessment.  Finally, the father master, putting his foot on one of the walls of the monastery, says, “hagh pat e” (meaning “it is a real, strong wall”.) Having said this, the master embraces his son, kisses him, and reconciles.  From that day on, the name of the Monastery remains Haghpat” (“Avandapatum” by A. Ghanalanyan).

From the second half of the XI century, Haghpat was the spiritual and ecclesiastical center of the Kyurikyan Kingdom of Bagratunyants.  According to historians, in that period, Haghpat and Sanahin monasteries had 500 members of the monastic order.  In 1072, Haghpat became an Episcopalian.  It experienced a spiritual, cultural, economic, and construction rise especially from the second half of the 12th century to the 14th century, when the Zakaryans were the rulers of Tashir-Dzoraget.  However, Haghpat has repeatedly been subjected to raids, and suffered from earthquakes, which are mentioned by historians and lithographers.

The frequent hostile attacks made the monastic order of the Monastery think about defense issues as well.  This is why the Monastery was fenced with semicircular walls and guard towers in different periods.

The oldest church of Haghpat is the Cathedral of S. Nshan built by Queen Khosrovanuysh, the wife of king Ashot III Voghormats (the Merciful) for her sons Smbat’s and Kyurike’s longevity. The church is dedicated to the saving Cross of Christ, due to which S. Nshan name was a token.  According to the inscription on the drum of the church, the construction was led by the first Abbot of Haghpatavank, Simeon, and Elder Tiranun.  According to the legend, it was built by Trdat, the most prominent and renowned architect among the “master of masters”. The church belongs to the “cross dome” subtype of the “domed hall” type.  The exterior is rectangular, the interior is cruciform, it has two-story sacristies in the corners.  The Cathedral of S. Nshan and other buildings of the Monastery is built of bluish, hewn basalt, and the inside is covered with frescoes.  On the western side of the Cathedral of S. Nshan is the large gavit (vestibule), which was built in 1210-1220s, on the site of the hall- a tomb founded by Empress Mariam in 1185.  The Cathedral is rich in lithographic inscriptions.

S.  Astvatsatsin Church is located on the north side of the church.  It is a central-domed structure, externally rectangular, internally cross-planned, and with rectangular cross-arms.  The entrance to the church with its sculptured frame is on the west side.

On the south side of the bell tower is S. Grigor Church (1125), which is externally rectangular, internally cross-planned, with rectangular cross-arms, and has sacristies in the corners.

To the north of S. Nshan Cathedral is the second gavit of the Complex (in 1255), which is called “HamazaspiZhamatun” (Hamazasp House) or “HamazaspiGavit” after the name of the Abbot who built it, HamazaspAnetsi.

Monasteries, as centers of cultural development, were of great value.  Manuscripts were imitated and preserved there.  Libraries were a manifestation of respect for writing.  Gratun-matenadaran (scriptorium) (XI century) belongs to the list of the oldest structures of Haghpat.  It is located on the south side of Hamazasp House.  It is a hall with a simple square plan with pleasant proportions, which has been renovated in 1258-1262.  The hall is lit by a pyramidal octagonal center skylight.  The volume of the scriptorium is hardly perceptible from the outside, due to the fact that the western and southern walls are covered with a hall, and the other parts are buried in the ground.  Haghpat scriptorium was one of the most famous writing centers of Medieval Armenia.  Manuscript books and church utensils were kept in skillfully built alcoves in the walls of the scriptorium, which served as a bookshelf or bookcase. In the late Middle Ages, the building of the scriptorium served as a pantry, as evidenced by the large number of jars buried in the ground.

On the eastern part, the famous, original high bell tower (25 m) of Haghpat Monastery is located.  It is one of the unique structures of the monument group of Haghpat, which for centuries has been the first to welcome visitors to the Monastery with its charming appearance.  Its construction is attributed to the brother’s Bishop Hamazasp and Hovhannes.  The plan of the structure is quadrangular, it has three floors, and the second and third floors are ascended by stone stairs attached to the walls.  The bell tower has several exquisite chapels.  There are eight tabernacles on the first two floors, the third floor is the belfry itself.  The arrangement of the decorations is remarkable: the stones in the row around the entire perimeter have oblique cuts in the middle of the vertical seams, in the shape of a swallow’s tail, with which they join each other, giving strength and rigidity to the structure. In this way, they increased the resistance of the wall to withstand earthquakes

In the northern part of the monastic complex is the refectory, which occupies a unique place among secular structures of Medieval Armenia. The structure is an elongated hall. It is divided by two central columns into two similar square sections, each covered by a system of intersecting arches and an octagonal vaulted dome.  On the eastern side of the refectory is the accommodation of the monastery’s servants, with a typical example of the thousand-faced roof of folk architecture.

Like other monastic complexes, Haghpat is rich in grave monuments.  Between the Cathedral of S. Nshan and Zhamatun, from west to east, there is an arched hall, which turns to the south between the church and the scriptorium and is completely covered with tombstones.  Here is also the famous “Amenprkich” (All-Savior) khachkar and an old and exquisite chapel.  The great wealth of Haghpat is the khachkar artworks.

On the south side of the roof of the aforementioned hall is another chapel with a rectangular plan and a vaulted roof.  It has a small tabernacle on the east side.

Monuments are among the remarkable structures of the Haghpat monastery complex.

Hushaghbyur (Memorial Spring) of Haghpat (in 1258) is one of the structures completing the Monastery complex.  It is outside the wall on the eastern side, almost 100 m away.  Husaghbyur is a rectangular hall, closed on three sides, and on the south-facing side, it has three arched openings in a symmetrical position, which by their very appearance seem to invite visitors from afar.  The water of Hushaghbyur of Haghpat is brought from the springs of Mount S. Luys, which, according to the legend they were sourced from the descent of the saint light.

In the XI-XII centuries, the Haghpat school and scriptorium were famous.  The school was considered a higher school university.  All sciences of the Middle Ages got higher education in Haghpat.  Hagpat was also known for its school of painting and miniature painting.  A significant manuscript heritage has been preserved from the writing center of Haghpat.  Two dozen of Haghpat’s manuscripts are now stored in Matenadaran, and about a dozen in other collections (Jerusalem, Venice, New Jugha, London).

Haghpat was built as a monastery, but at one time it also served as a fortress.  Due to its highly located position, the whole neighborhood can be seen well.  A brilliant poet, ashugh Sayat-Nova (priest Ter Stepanos) lived and created his compositions in Haghpat for almost two decades.

There were many sanctuaries in Haghpatavank, among which is “Miracle-making S.  Nshan of Haghpat”, which was preserved in Haghpatavank until the first half of the 20th century.  In the cross of S. Nshan was merged the relic of the cross that St.  Hripsime brought to Armenia and which was hidden for some time in Mountain Varaga(Mount Erek).  R.  Yerznkyants notes that S. Nshan “performed many miracles, healed peoples’ wounds and illnesses…”.

The complex of Haghpat, as a valuable historical-architectural monument, was under the care of the state and underwent many repairs and restorations.  Since 1989, it has been handed over to the Directorate of the Mother See of Etchmiadzin.  In 1996, it was placed on UNESCO’s World Cultural Heritage List.

Since 2010, the Feast of Khachverats (Exaltation of the Holy Cross) has been declared the pilgrimage day of Haghpat Monastery.  On that day, Haghpat residents also celebrate the day of their village.  The Feast of Kachverats is celebrated on the Sunday nearest September 14, meaning that it can occur on dates from September 11 to September 17.

Haghpat Monastery is one of the largest and most famous monastery complexes in Armenia. It is located in the northern part of Armenia, in the southeastern part of Haghpat village of Lori Province, on a plateau, in a place visible from the entire surrounding area.

Travel to the most notable holy destinations in Armenia. including Haghpat Monastery

Reviews for the Haghpat Monastery