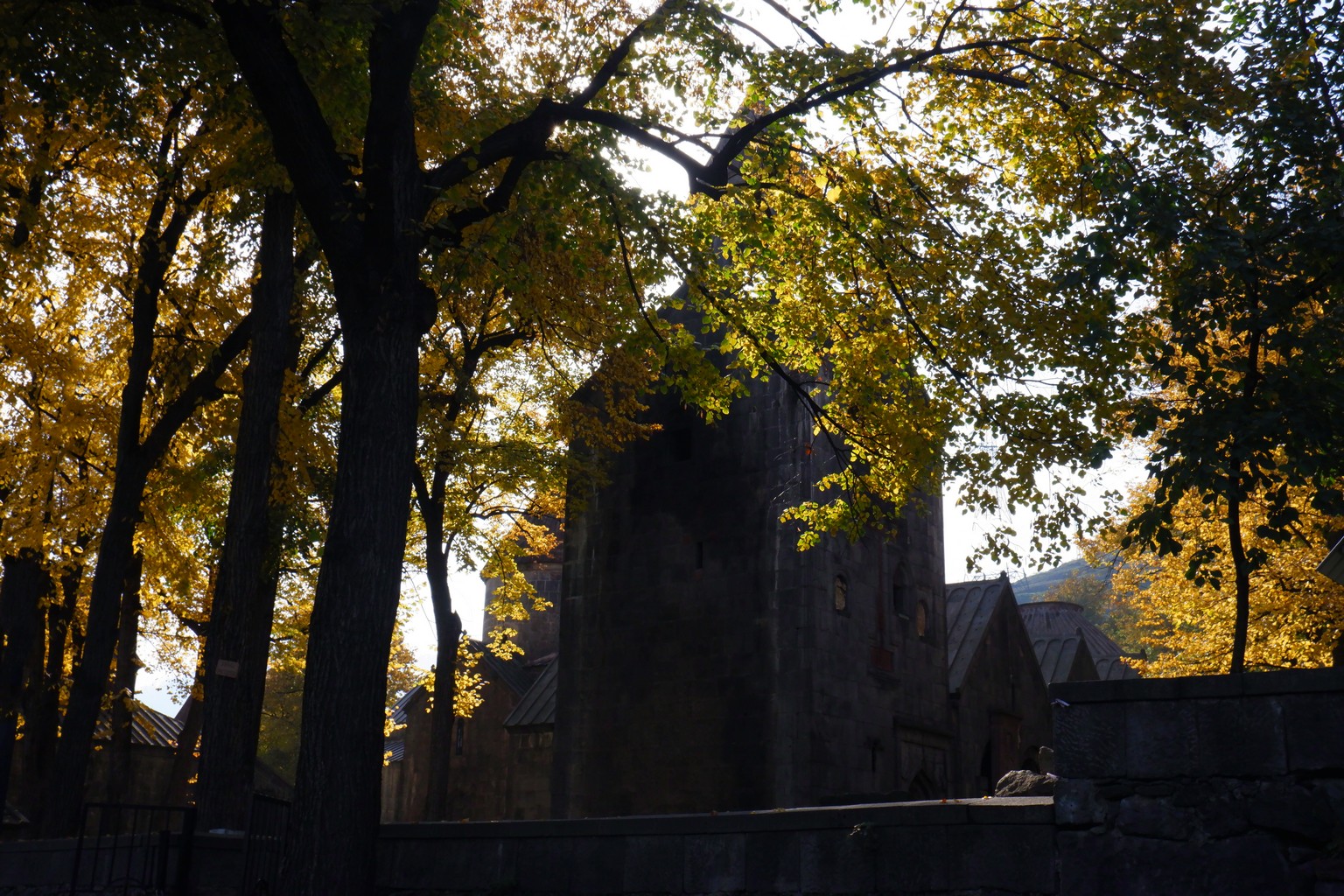 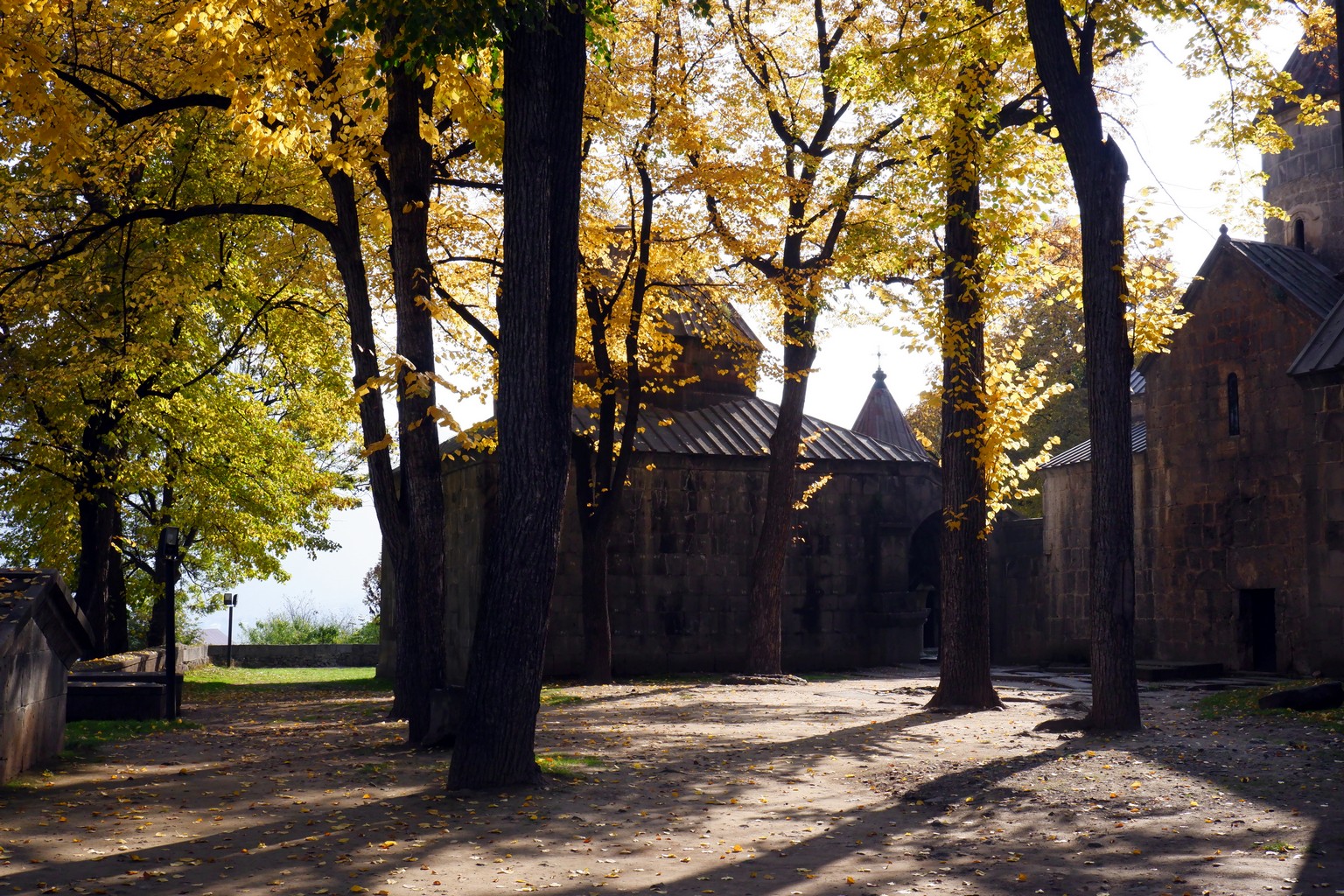 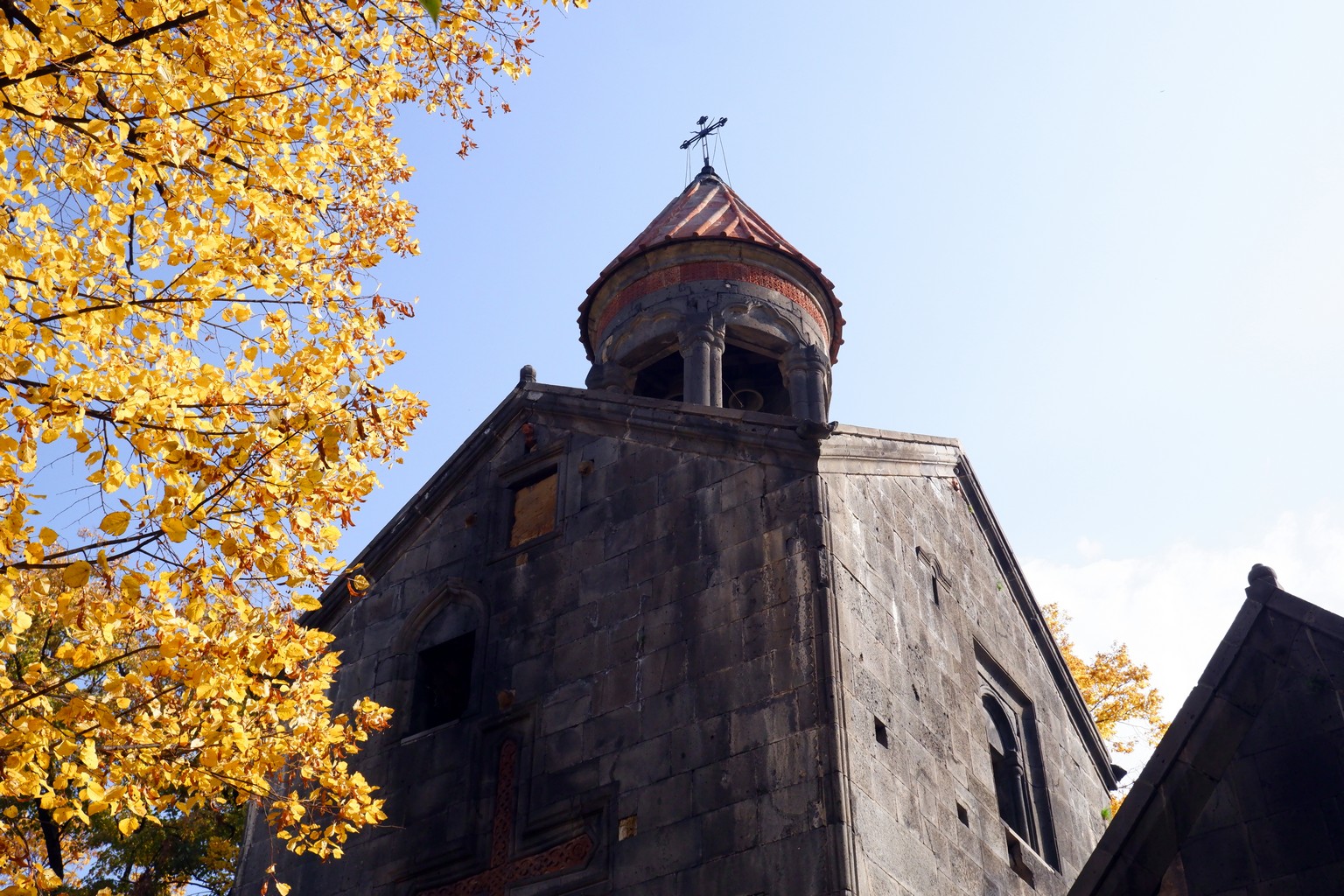 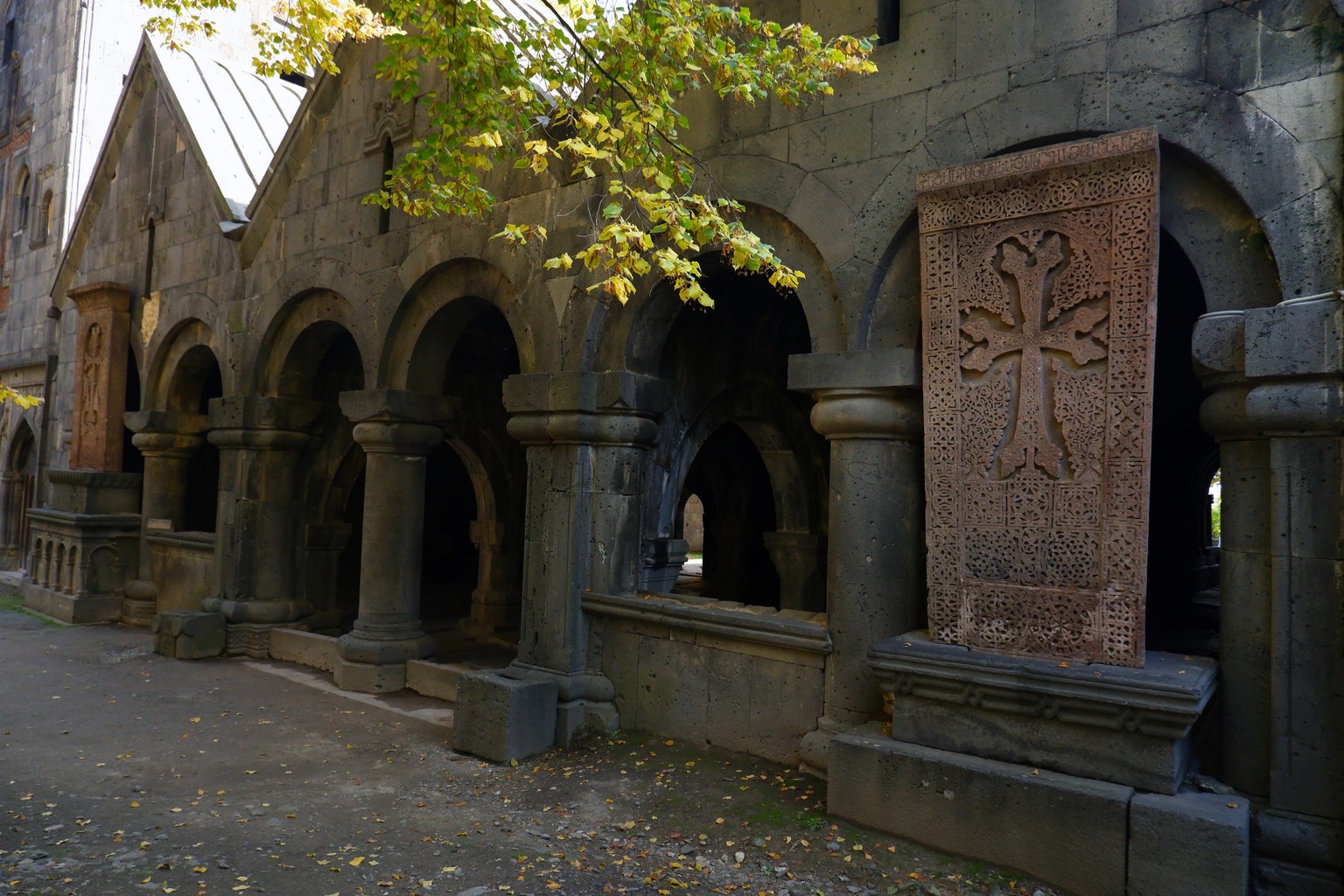 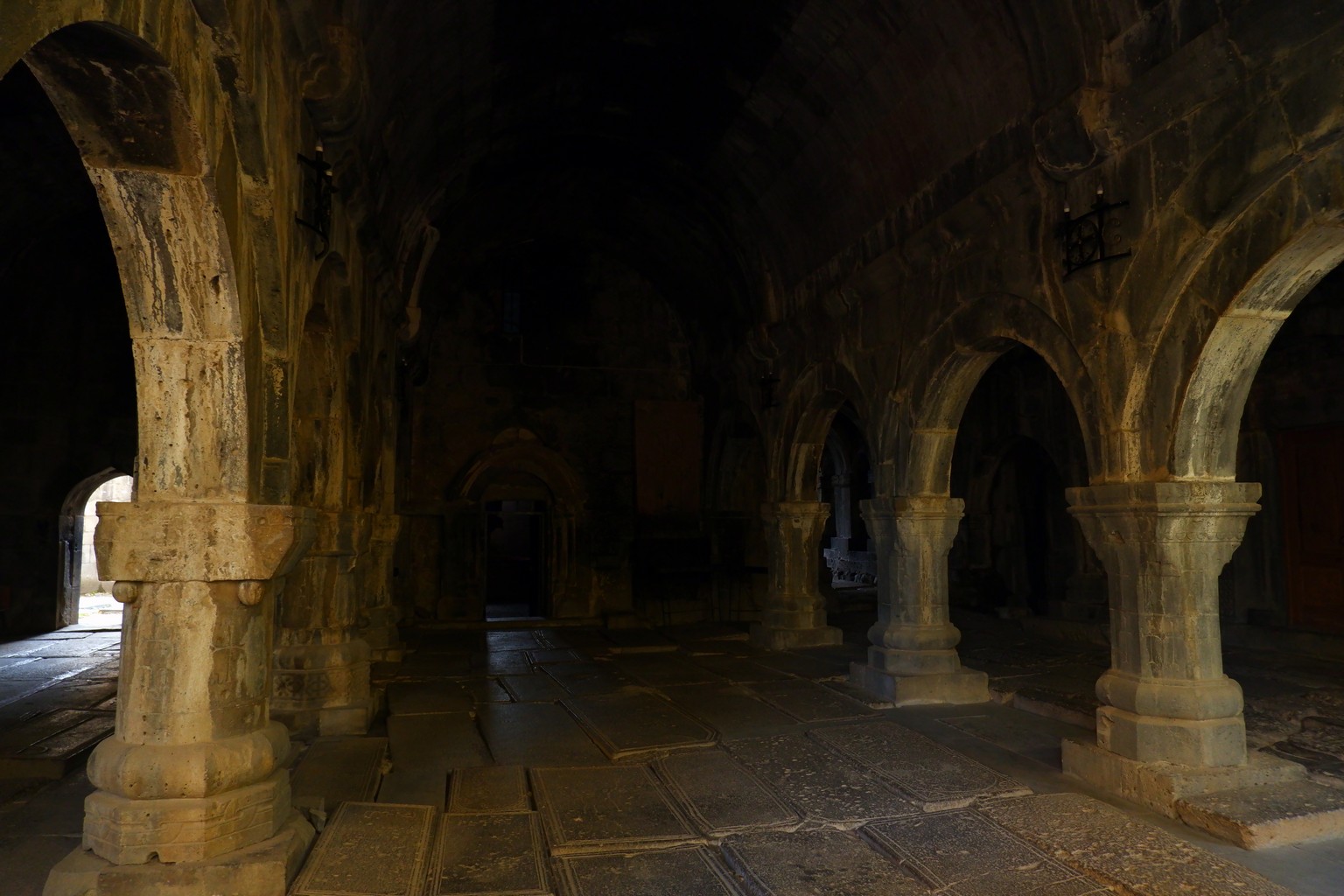 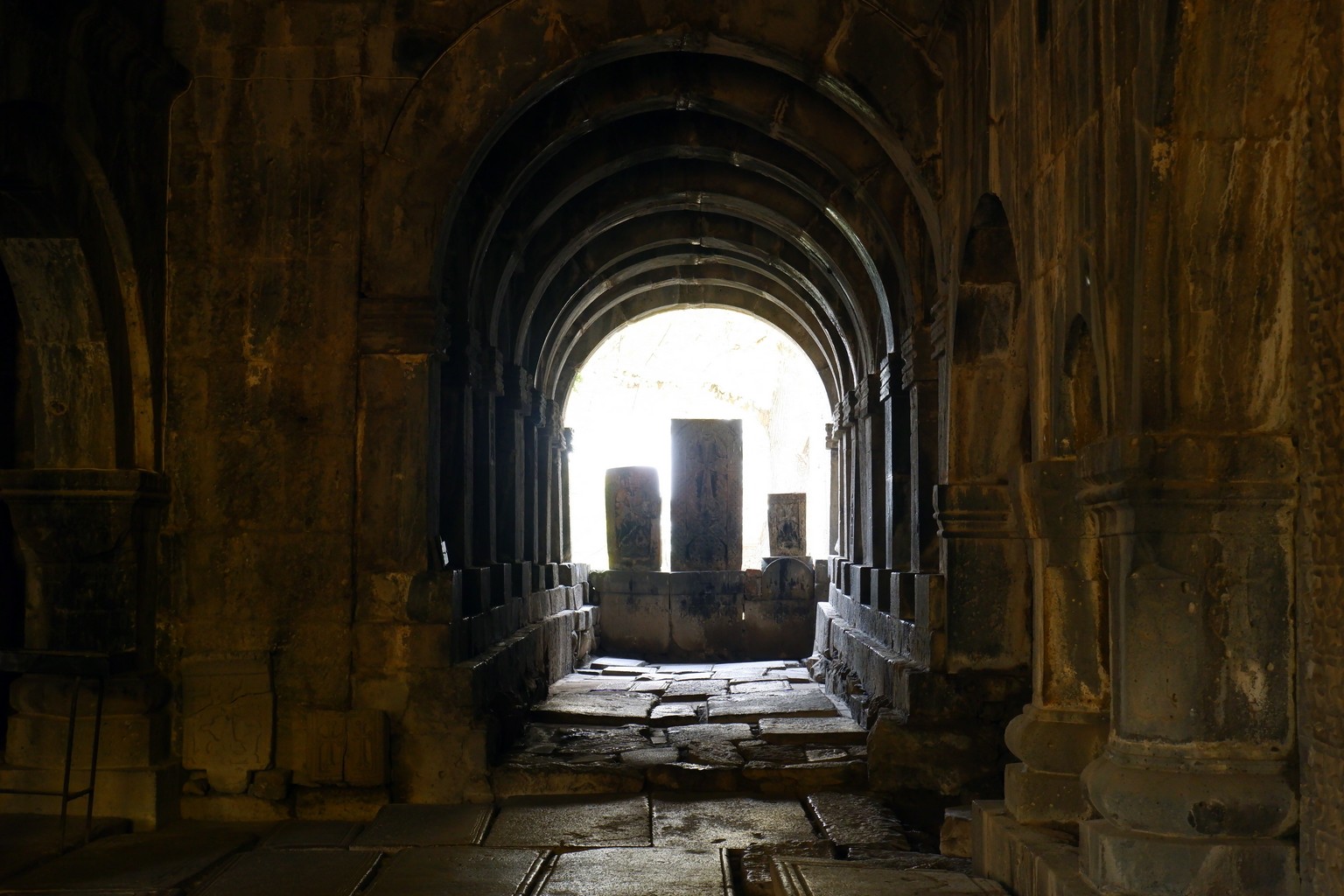 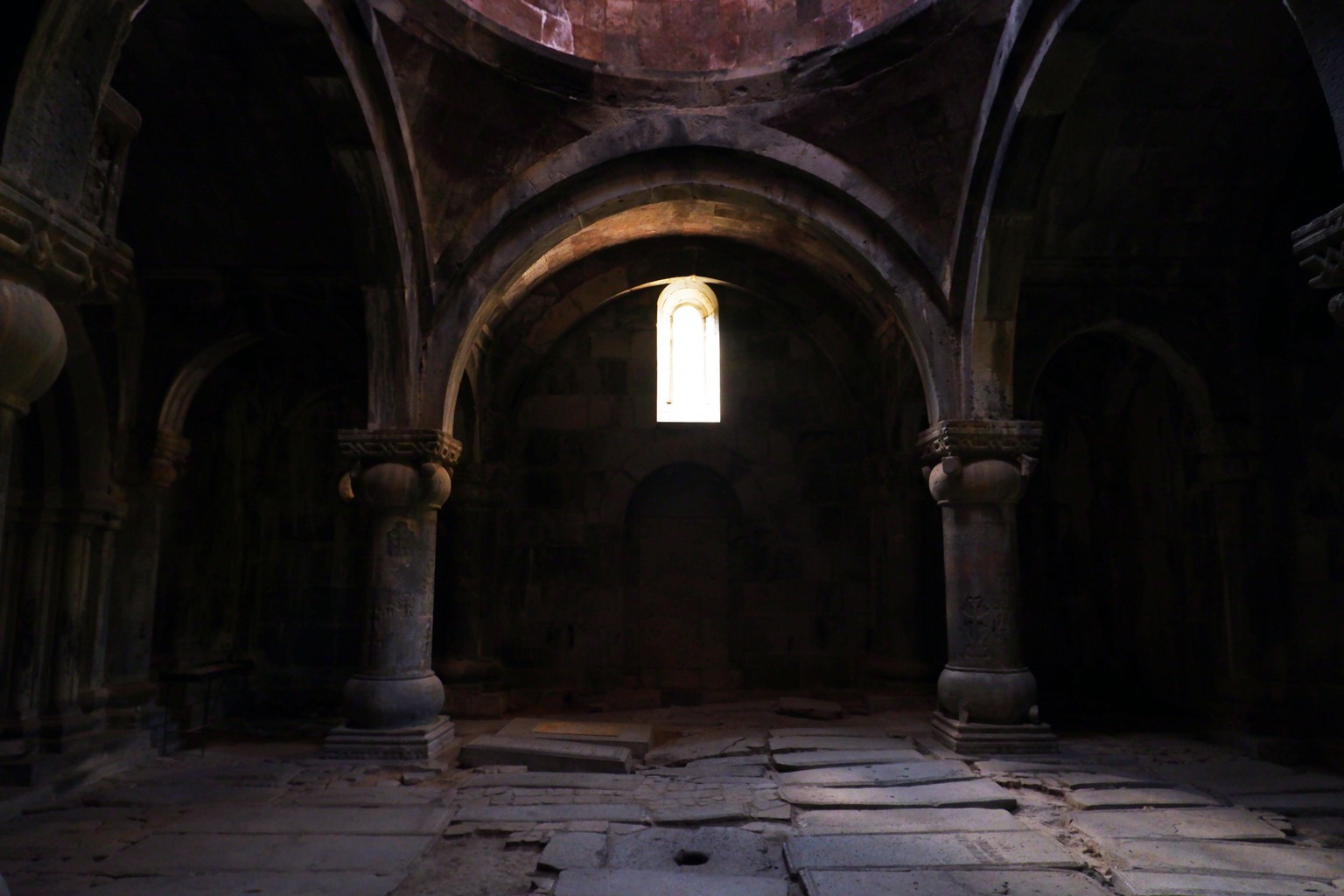 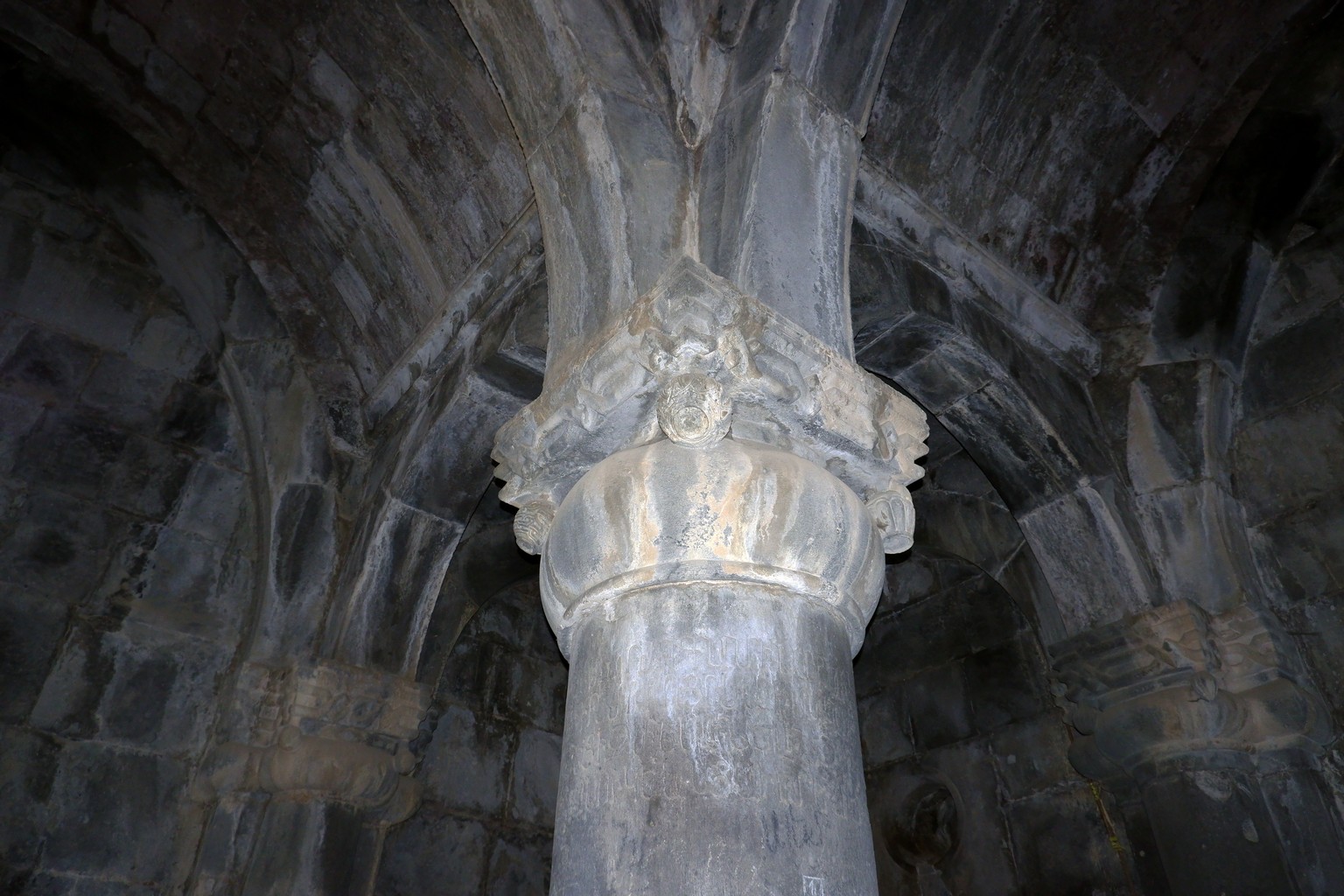 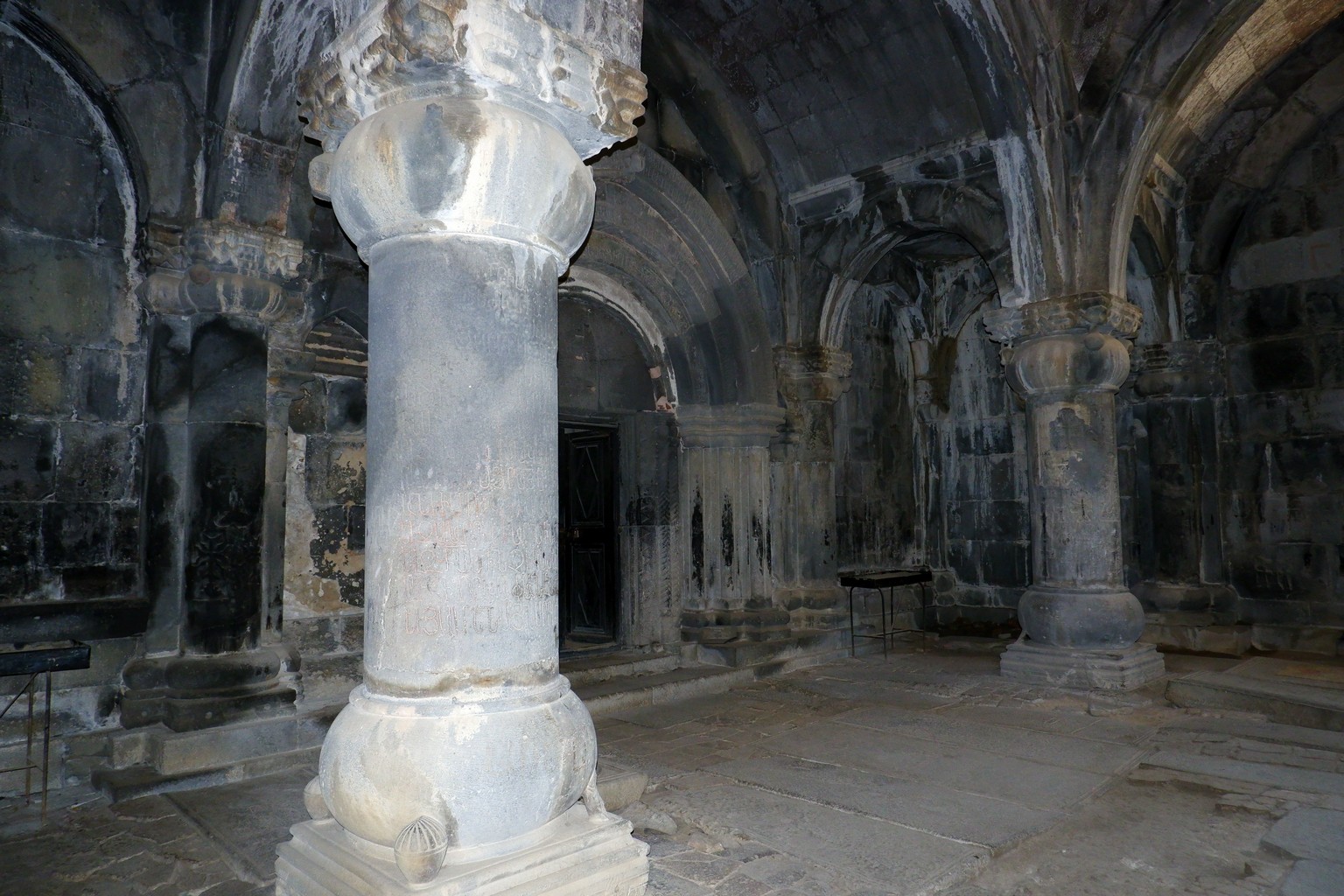 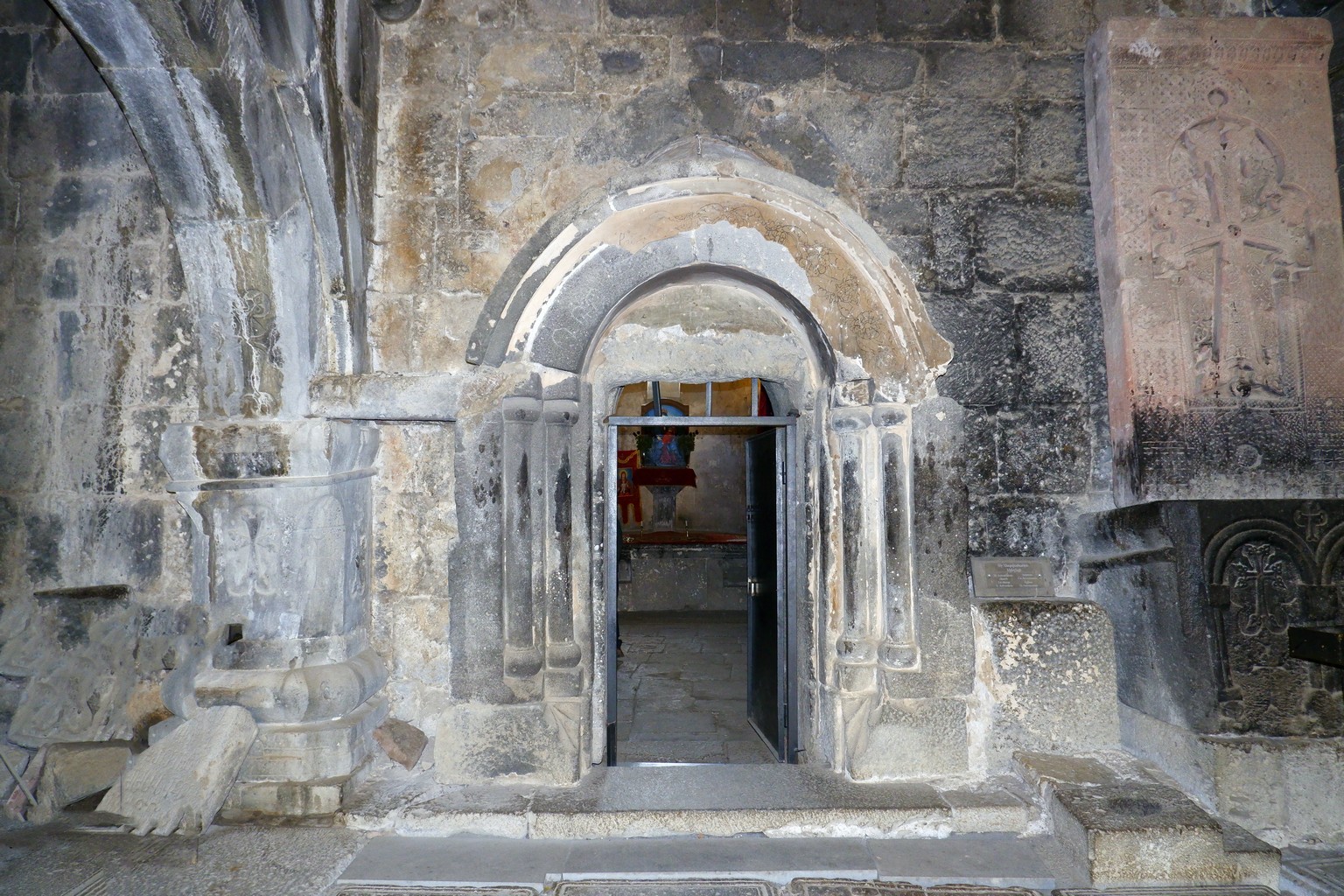 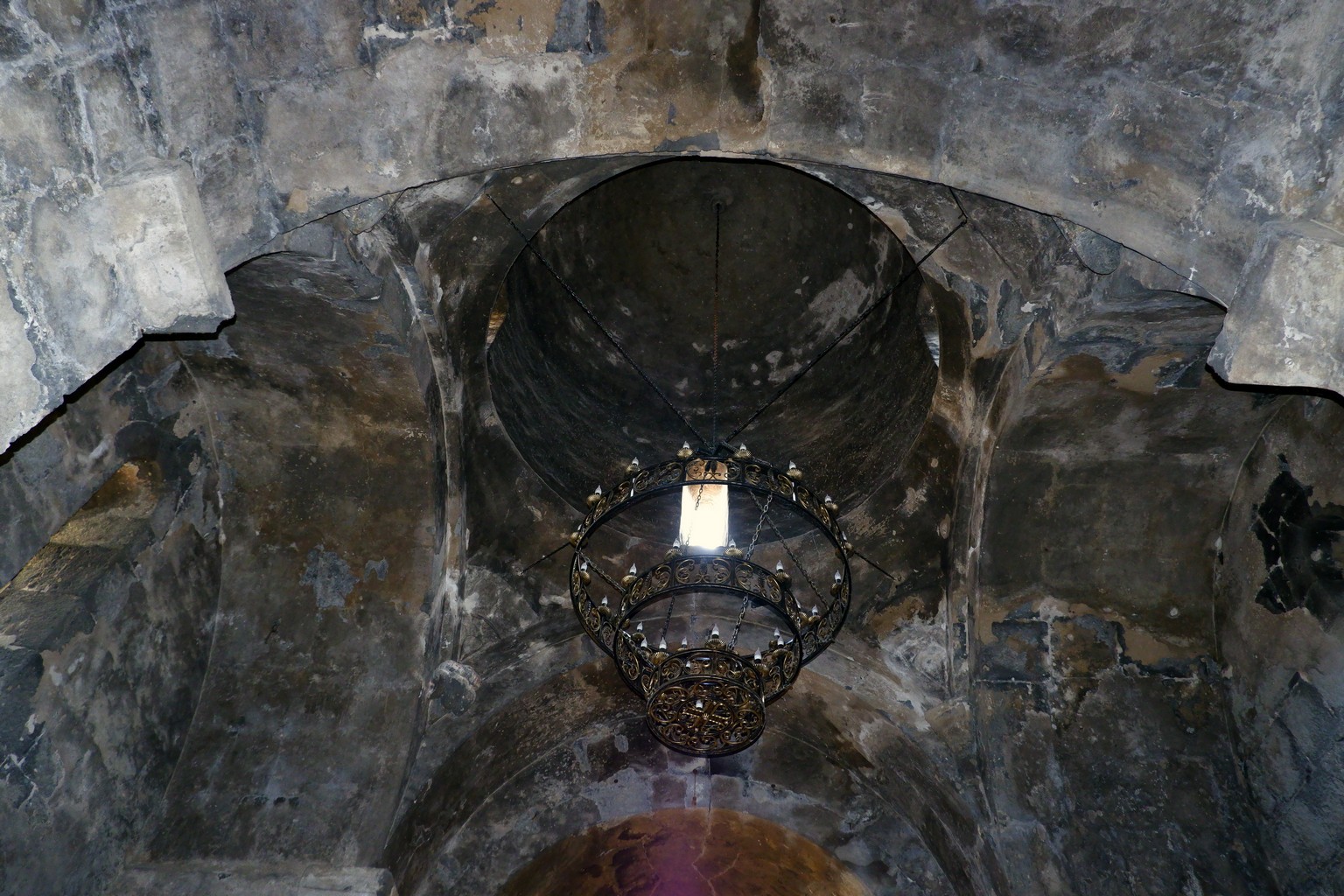 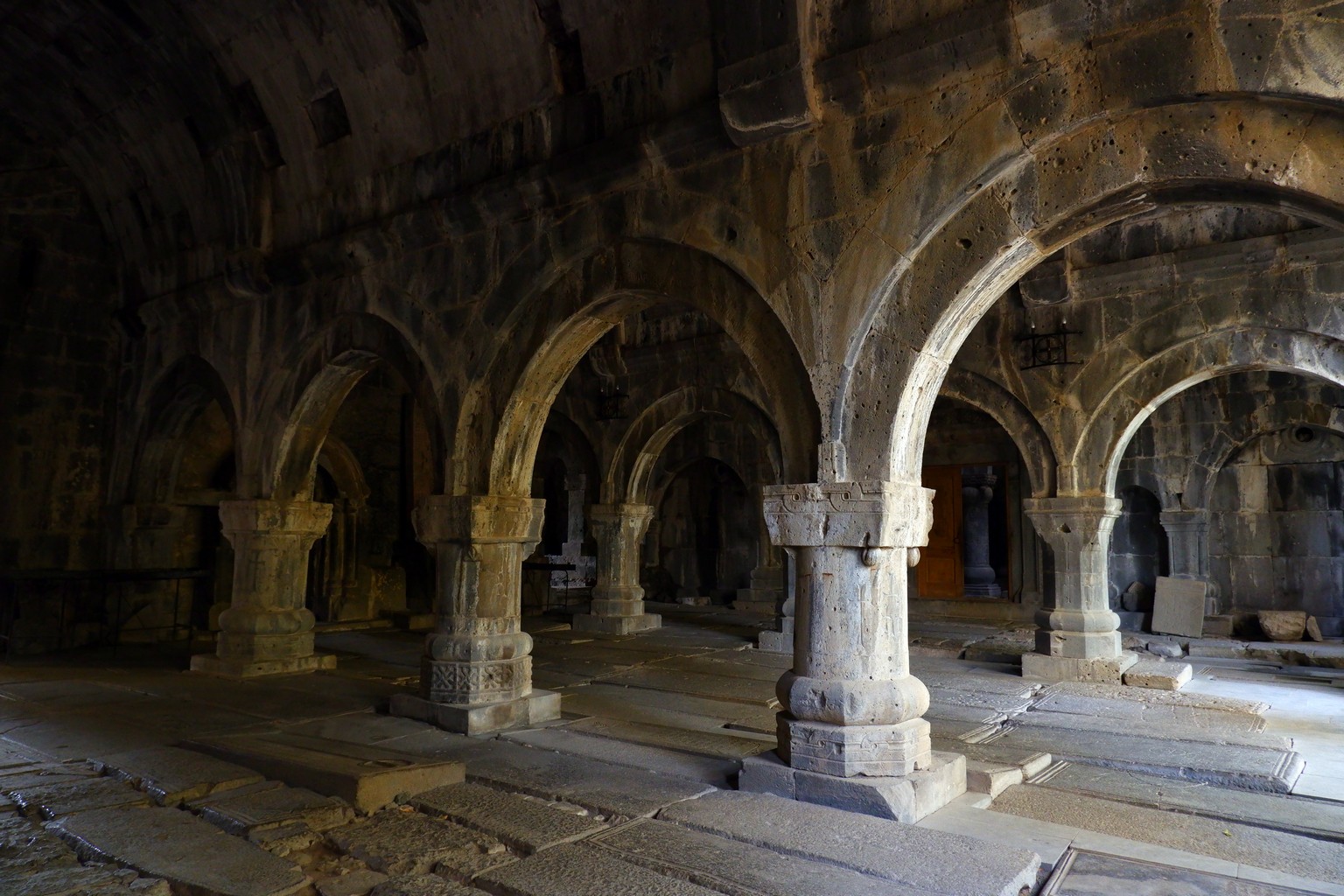 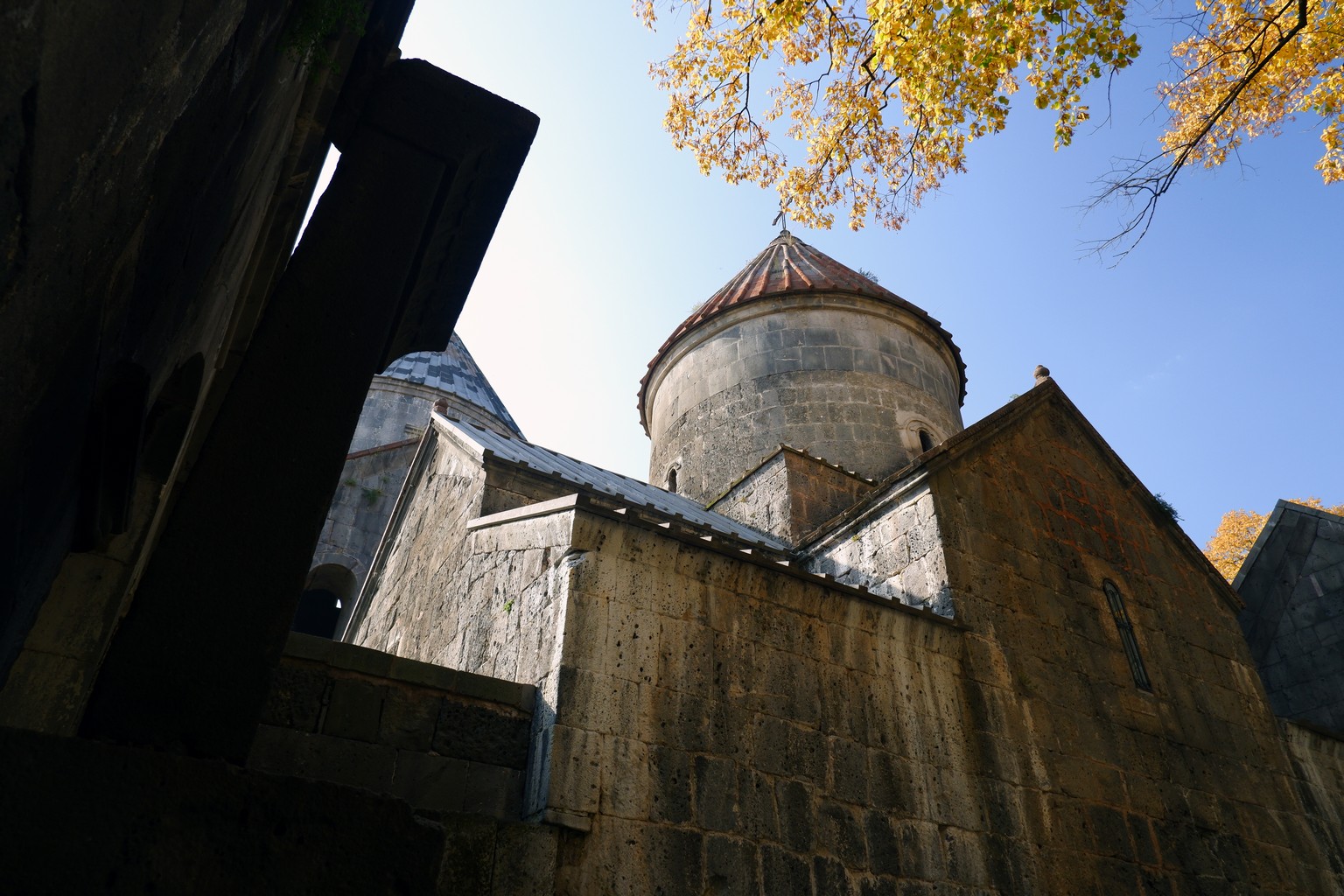 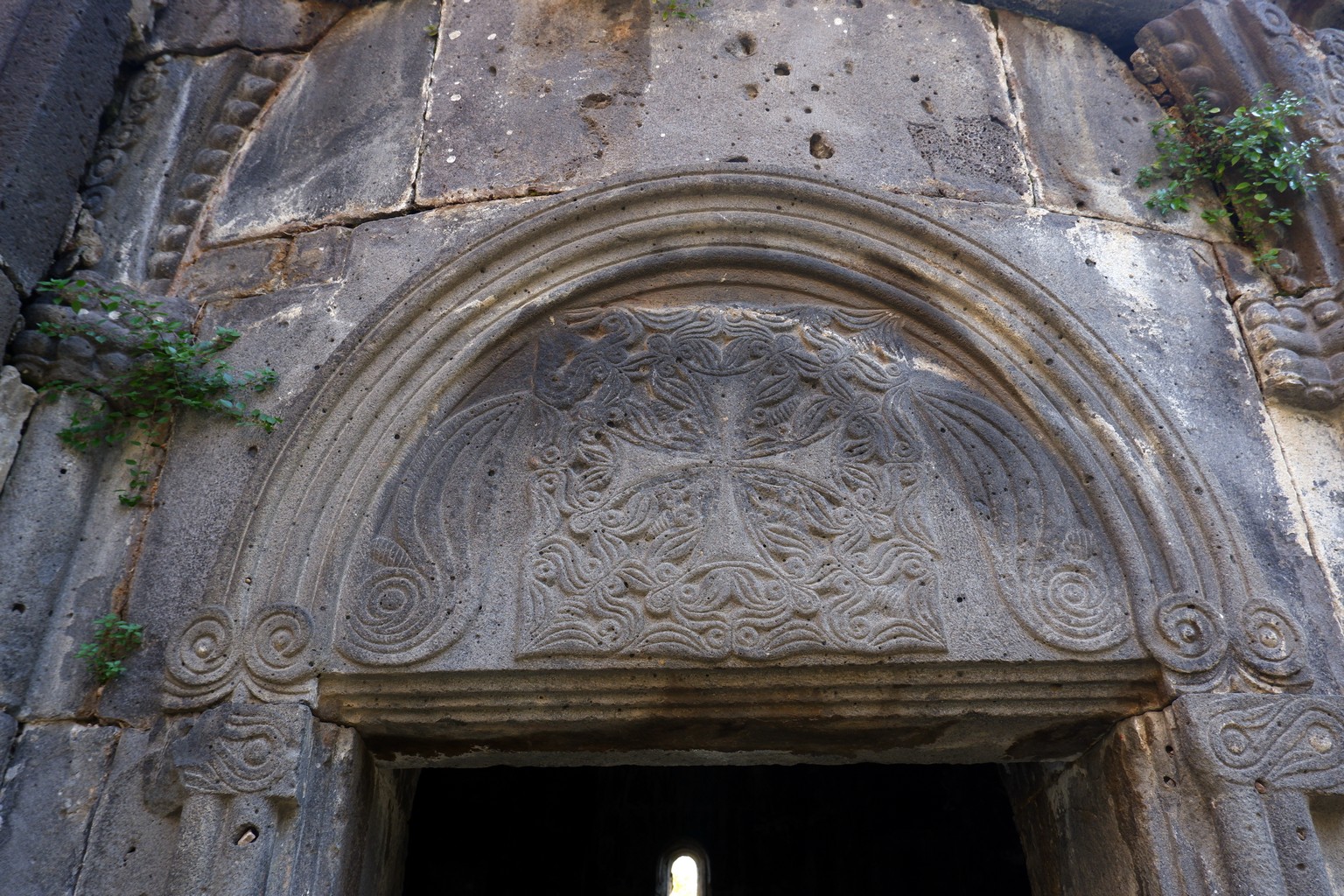 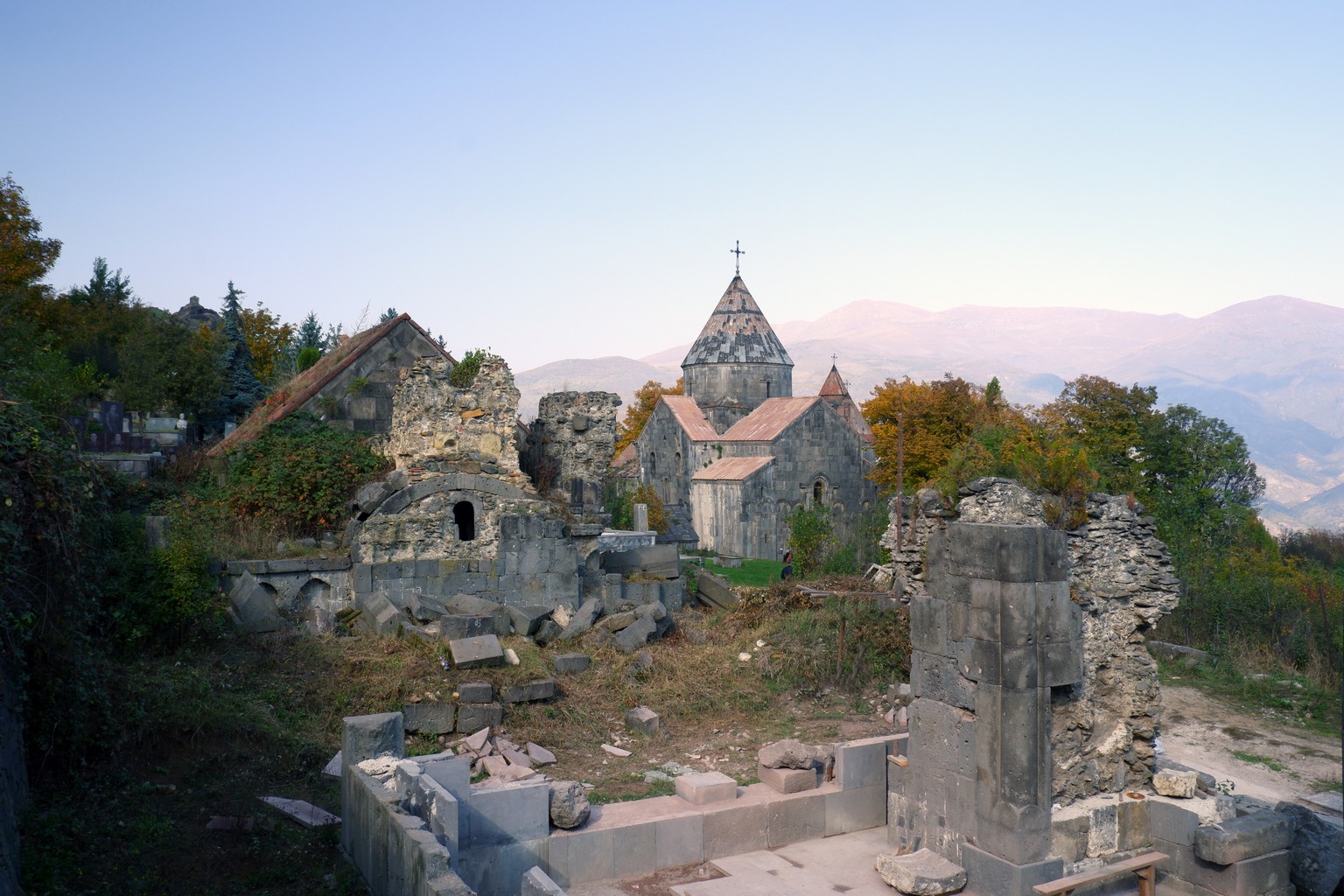 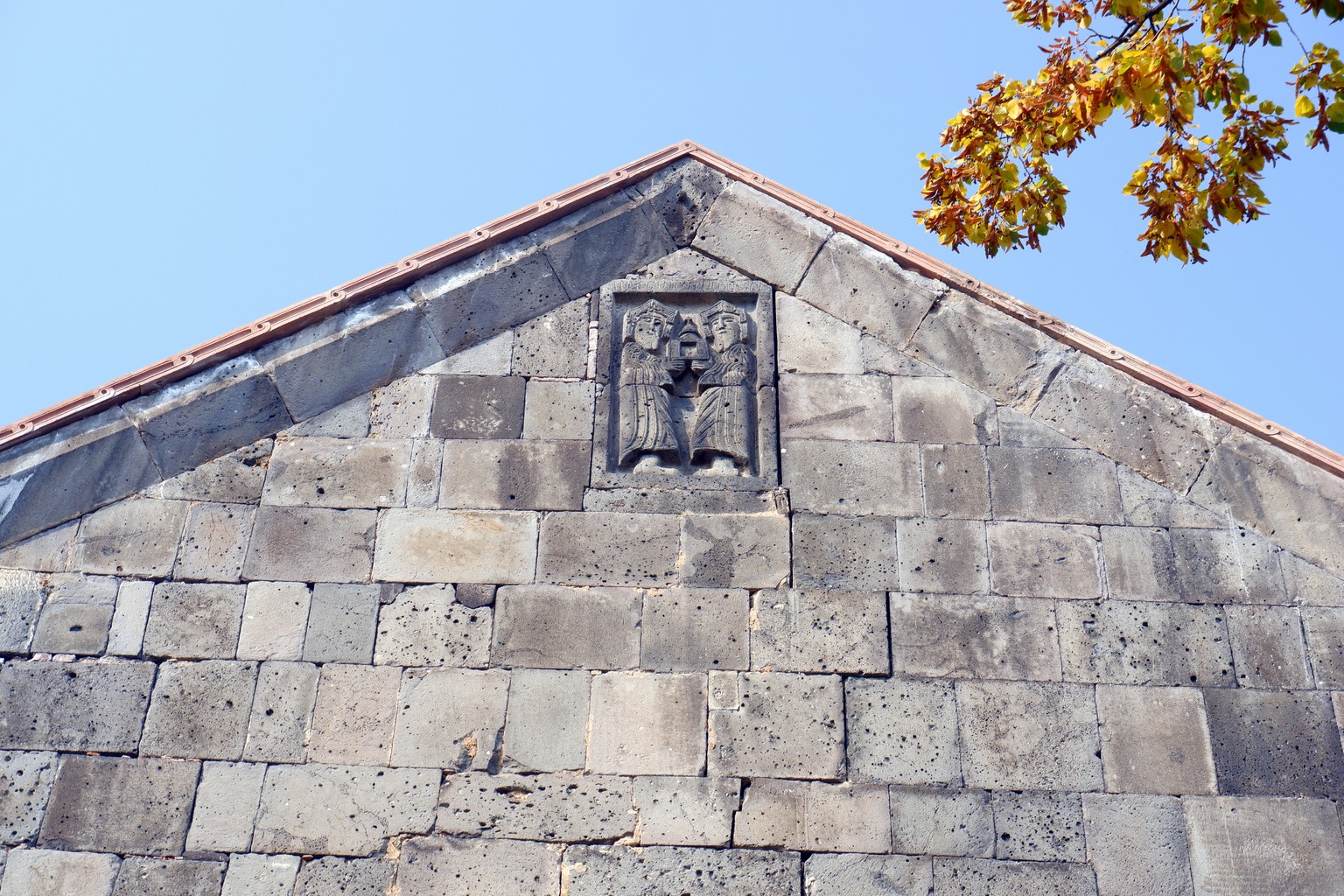 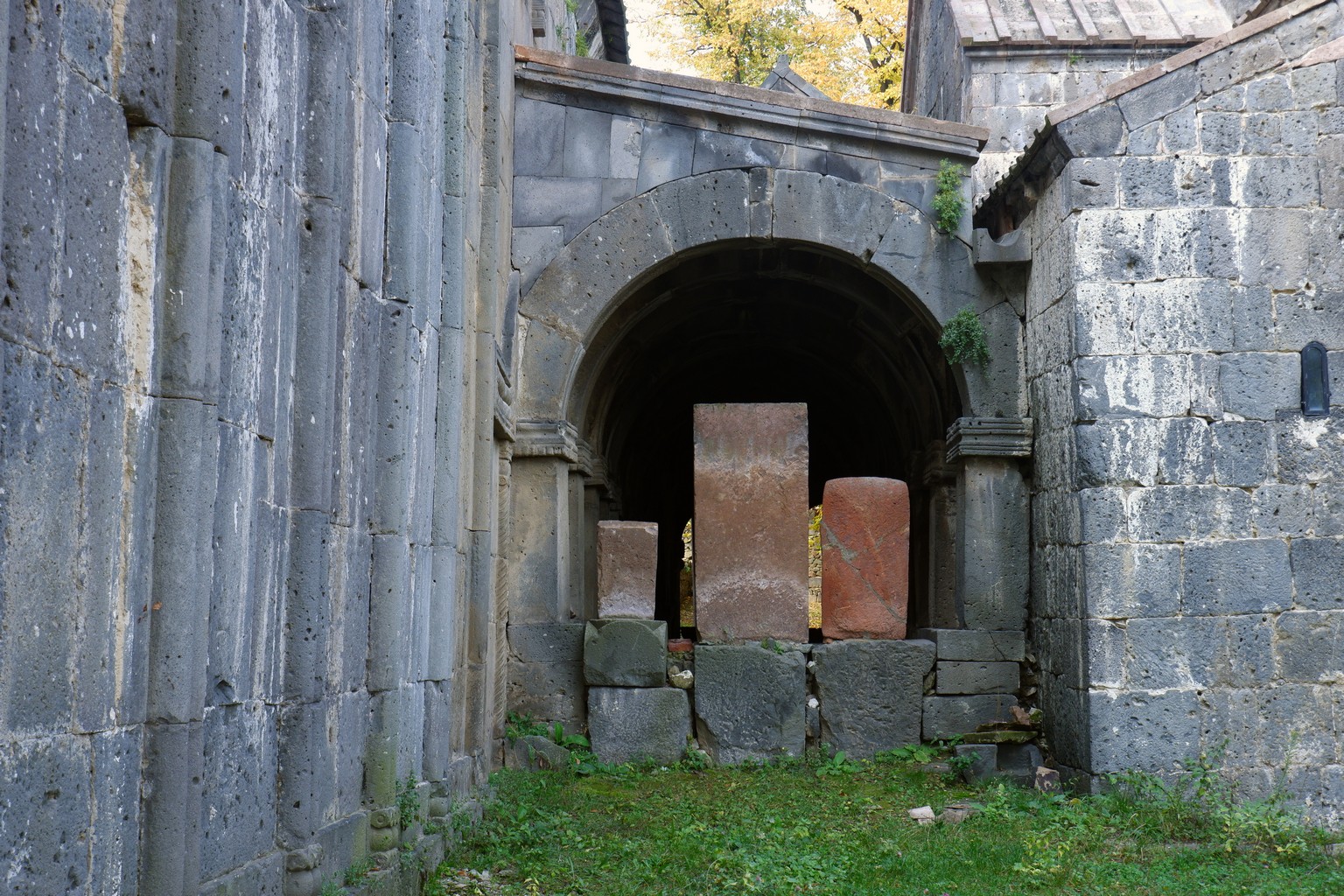 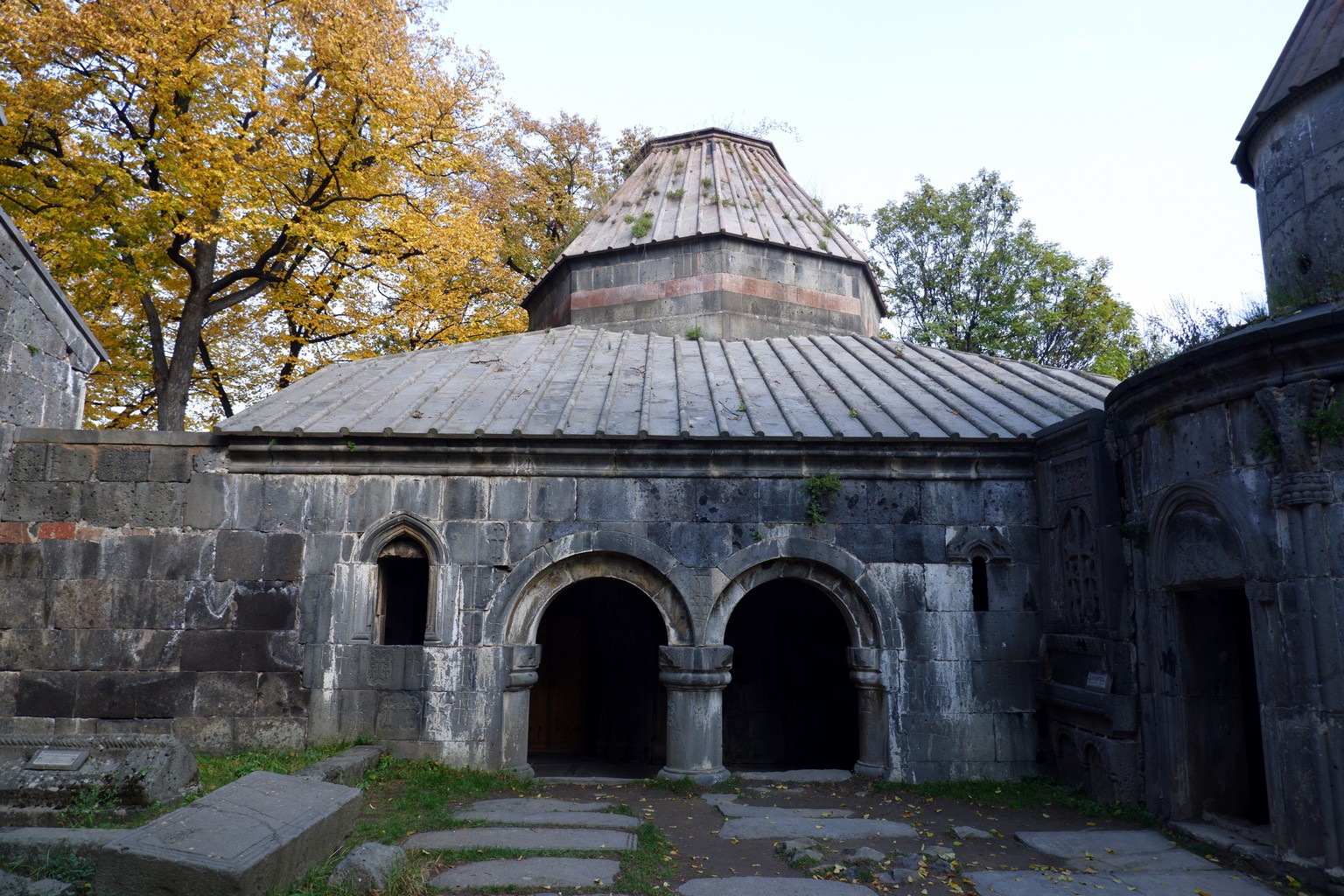 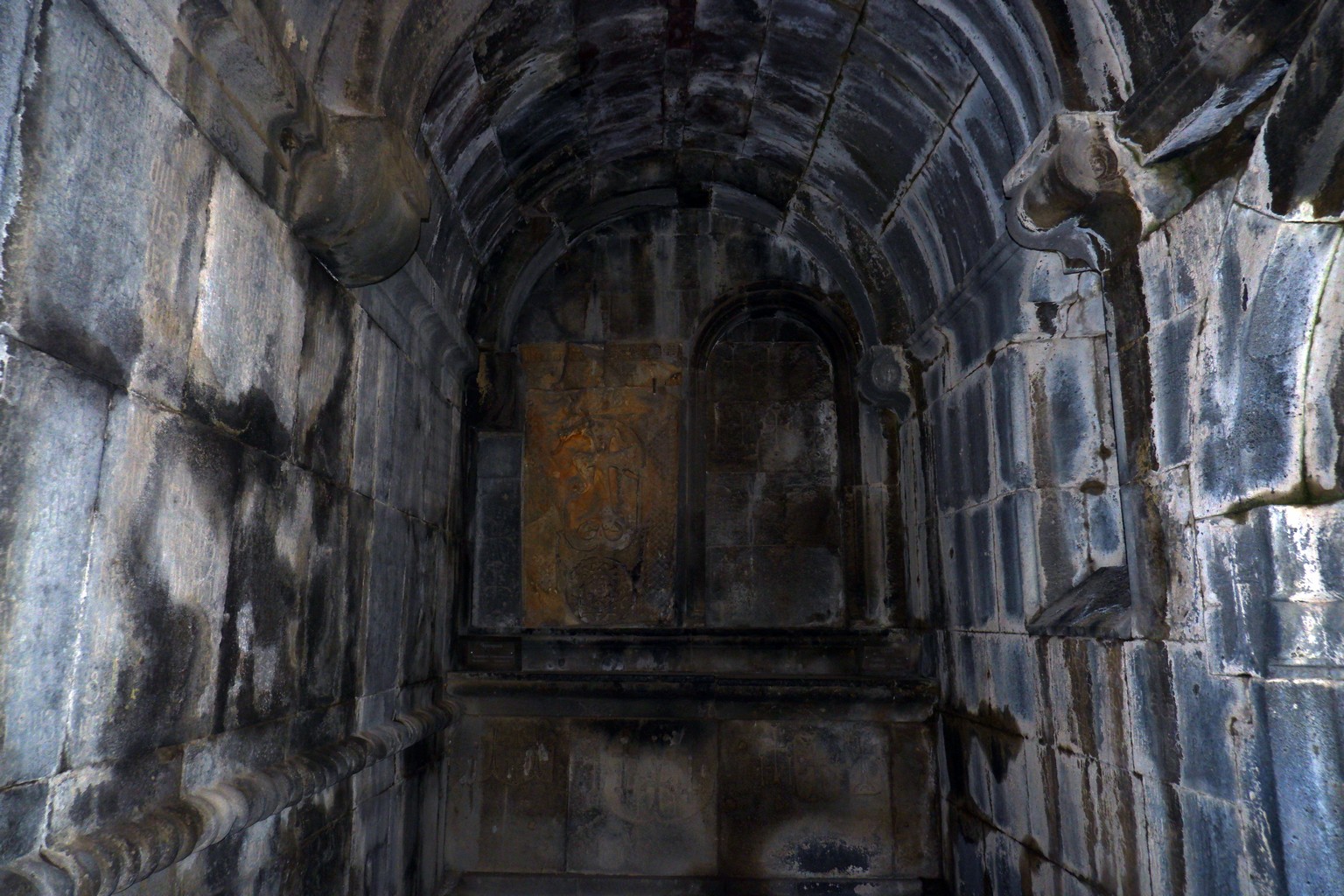 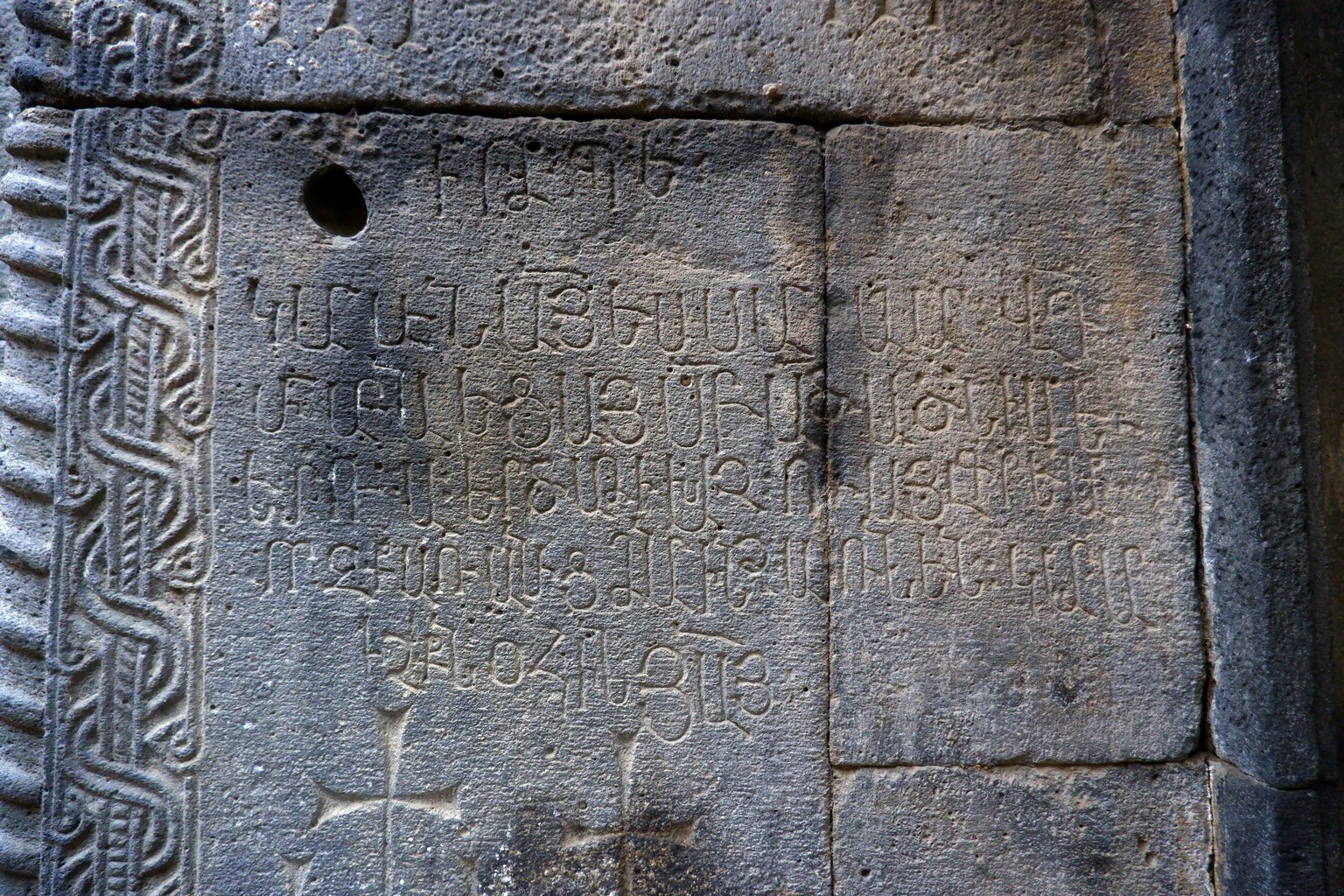 The monastery complex was a medieval center of spiritual, cultural, and scientific-educational significance. A number of scientists, clergymen, philosophers, poets, theologians, sculptors, and architects were educated here.  The name “Sanahin” is explained by the expression “this one is older than that one”. According to the legend, the older monastery than Haghpat was called Sanahin. According to it, the monastic complex got the name “Sanahin” from the construction of its twin, architectural gem, Haghpat Monastery.  It is said that a pious prince was looking for a master to build a monastery.  A master, with his own son, comes to Sanahin and begins to work.  During the work, a dispute arises between the father on one side, the son and a sub-master on the other.  The son gets angry with his father and leaves the construction site with the sub-master.

Soon another prince invites him to build a monastery for himself.  The son gladly accepts the invitation.  When the walls of the new monastery are raised, they notice from Sanahin that some structure stands out on the opposite plateau.  The workers report it to their master.  The old craftsman looks at Haghpat from Sanahin and says: ” sa, qanznahin”, that is “ this one is older than that one”.  Thus, the word was passed from one to another, shortened, became “saznahin”, then “sanahin” and eventually remained Sanahin.

The monastery complex of Sanahin was built around  Surb (Saint) Astvatsatsin Church.  The complex includes S. Astvatsatsin Church and S. Amenaprkich Church with their gavits (vestibules), seminary, S. Grigor Chapel, bookstore, bell tower, S. Hakob Church, S. Harutyun Chapel, the tribal tombs of the Kyurikyans, the Zakaryans and the Arghyutyan-Yerkaynabazuks.  Outside the group of Sanahin monuments are a number of small churches with sculptural khachkars, the spring of the monastery, as well as the famous bridge.

S.  Astvatsatsin Church was built in the 30-the 40s of the X century during the reign of King Abbas  IBagratuni.  It is one of the examples of the cruciform dome subtype typical of the Armenian medieval classical architecture. The drum of the dome was originally multi-faceted, which during the renovation of the church (in 1652) was transformed into a cylinder and was crowned with a simple conical arch.  Some traces of former frescoes have been preserved inside it.

The gavit of S. Astvatsatsin Church is a unique example among Armenian gavits with its architectural design.  It had a transitional role to pass to the churches, the other gavit, and the seminary.  It served as the main tomb for the Monastery, and the floor was completely covered with tombstones.

In 966, King Ashot III Voghormats (the Merciful) and Queen Khosrovanuysh built S. Amenaprkich Church for the longevity of their sons Kyurike and Smbat, founded a congregation and a spiritual school of the highest class. In this learning center, numerous manuscripts were written, flourished, and imitated.  35 of the manuscripts written here are kept in the Matenadaran.  They give an idea of ​​the cultural work carried out in the glorious Monastery of Sanahin over the centuries, containing valuable manuscripts and records.  Theology, philosophy, rhetorical art, music, medicine, and other sciences were taught in the school.

In 979, by the proclamation of King Smbat II Tiezerakal (Master of the Universe), Sanahin Monastery became the episcopal seat of the newly established Kyurikian Kingdom. One of the prominent abbots of Sanahin was DioskorosSanahentsi. During his days, the bookstore and S. Grigor Chapel were built, the spiritual school became a great educational center, and the library was enriched.  GrigorMagistrosPahlavuni gave classes in the school, and the hall built between S. Astvatsatsin Church and S. AmenaprkichChurch was called by his name “Magistros Seminary”.

son of Abbas and others.

The church had two entrances, on the north and west sides, the first of which was later closed due to the construction of the seminary hall between the churches.  On the upper part of the eastern facade of the church, there is a bas-relief in a rectangular frame with the images of Smbat and Gurgen.  They are depicted standing full-length, face to face, holding a model of the church.  The walls of  S.Amenaprkich Church were also covered with frescoes.

S.  Grigor Chapel and the Bookstore were built in 1063 under the initiative and leadership of Abbot DioscorosSanahnetsi and with the funds of Queen Hranuysh, daughter of King David Anhoghi.  The buildings are located in the northeastern part of the complex at a distance of 3 m from each other.  Later, in the intermediate area, a lobby was built. S.  Grigor Chapel is a small structure raised on three-level masonry foundations, circular on the outside, and cross-shaped on the inside, with a four-chambered central dome.

The external appearance is given significant movement by the consecutive wall arches, niches, and narrow and elongated windows bordered by delicate crowns. The  Chapel was rebuilt in 1061, and the inner dome was built later, probably in 1652.

The  Bookstore is located on the north side of S Grigor Chapel, it is a hall with a square floor plan, the style of construction is similar to a clock house, where the wall columns are placed one by one in the centers of the four walls are connected to each other by arches.  Here, not only handwritten books but also precious objects of the Monastery remains, and relics were stored.  That’s why the bookstore was also called Nshkharatun. The bookstore of Sanahin is the oldest Armenian bookstore, the largest in terms of its layout.

Sanahin’s spiritual school or seminary is known by the name of GrigorMagistrosPahlavuni “The Magistros Seminary”.  It forms the continuation of the gavit of S. Astvatsatsin Church. It is a rectangular long hall, where the alcoves formed by arches touching the longitudinal walls probably served as seats.

The bell tower of Sanahin (1211-1235) was built in continuation of the border of the western facades of S. Amenaprkich Church and S. Astvatsatsin Church. It is a three-story structure with a square plan, crowned by a bell tower leaning on six columns.  The first floor is a simple vaulted hall with a separate entrance on the north side.  An entrance on the western facade leads to the second and third floors with stone steps.  On the second floor, there are three small sacristies adjacent to each other, one of which has an updated construction record of construction on the entrance facade, according to which the bell tower was built by Vag, the son of Abbas.  The third floor is a complete hall, covered with the construction of intersecting arches supported by four pairs of columns, bearing the bell tower.

S.  Harutyun Church (first quarter of the 13th century) is located on the territory of the cemetery.  The Church differs from a vaulted hall with a pair of tabernacles in the eastern wing.

Outside the territory of the Monastery, the ruins of S. Hakob Church have been preserved.   It is one of the oldest buildings in Sanahin, built in the 2nd half of the 10th century.  The Church is a cross-winged, domed hall-type structure with a rectangular layout on the outside and a cruciform layout on the inside.  There are four sacristies (dilapidated)in the corners of the hall.

About 50 khachkars (cross-stones) have been preserved in the Sanahin Monastery Complex and in the surrounding area. About 190 lithographs from the 10th-19th centuries have been preserved (on structures, khachkars, and tombstones). 19 of them are of a construction nature, others contain royal and princely proclamations, prayers, memorials, and information on donations to the monastery. Two springs have been preserved in Sanahin, one in the middle of the former village (end of the 12th century – beginning of the 13th century, it is a vaulted hall with a double-arched opening), the other is a single-arched opening next to the northern wall of the Monastery (1831).

Sanahin Bridge is one of the best engineering structures of medieval Armenian architecture.  It was ordered to build in the end of the XII century by Queen Vaneni (Nana) in memory of her late husband,  King Abbas Kyurikyan.  The road leading to the Sanahin Monastery passes through the bridge. It is the best-preserved among dozens of similar monuments in Lori.  The right-hand abutment of the single-span (span length 18.6 m) arch bridge is on a high cliff and the left-hand abutment is on a low river bank, resulting in this half of the bridge has a significant rise towards the center while the other half is flat.  The transition from the lower level on the left side of the bridge to the general horizontal level is made through the stairs.  In the four corners of the walls of the middle part of the bridge, as protective emblems, lions one by one are depicted in a posture immersed in the stone.

In 2000. the Sanahin Monastery was included in the UNESCO World Heritage List.

The Sanahin Monastery Complex is located in Sanahin District of Alaverdi City, Lori Province, on a high plateau on the right bank of the Debed River.

Travel to the most notable holy destinations in Armenia. including Sanahin Monastery

Reviews for the Sanahin Monastery