Eve of the Nativity and Theophany of our Lord Jesus Christ 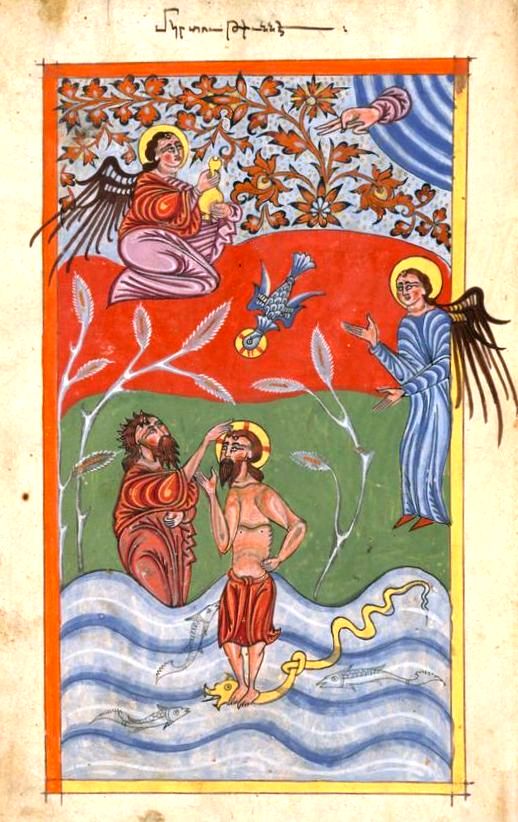 The only begotten Son of God, born from Ever-Virgin Mary came to this world for our salvation. Not departing Heaven, He became incarnate, wholly uniting with human nature and receiving its fullness in everything except sin [see The Creed]. Through this immaculate birth, the Son of God also became the Son of Man, beginning the spiritual birth and renewal of mankind. Christ’s Nativity was the symbol of His unspeakable humility, through which He ascended from heavenly glory to reside in the world desecrated by sin. He was born at a cavern in Bethlehem, in a manger for meek animals [Luke 2:7], since the Creator of the universe came not to reign, but to serve the fallen mankind, in order to restore the darkened image of God in it. According to the teaching of Church fathers, He was born in an unknown and wretched shelter, in order to conceal the shame and wretchedness of our sinful nature by His heavenly glory and fill us with the fullness of grace. As unknown and unremarkable His birth was for men at first, so enormous was the echo of this cosmic event among the celestials, where a multitude of the heavenly host praised God saying “Glory to God in the highest, and on earth peace among men with whom He is pleased.” [Luke 2:14] as to earth came He, Who would atone the sins of men and reconcile them with God the Father.

Only a few shepherds witnessed the praise of angels and came to worship the newborn [Luke 2:8-2:20]. Also able to perceive the Son of God were the magi–wise men from the east, who came to Israel following a leading star. They bowed before the newborn Messiah and worshipped Him, then opened their treasures and presented Him with gifts of gold, frankincense, and myrrh [Matthew 2:1-11].
According to ancient tradition, Christ was born on January 6. Armenian Orthodox Church is the only church that has held strong to the tradition of celebrating the Nativity and Baptism of the 30-year-old Christ on this day, refusing to separate Baptism and Nativity by celebrating Nativity on December 25.

Baptism existed before Christ. It was accomplished by submerging the subject into the water, the cleansing properties of which were viewed as a sign of sanctification. However, Baptism is a divine mystery was established by Christ Himself. Receiving baptism from John, Christ sanctified this rite through Himself, crushing in the waters of Jordan the skull of the dragon – the Satan – and washed the burden of Adam’s sin away from human nature. Upon His resurrection, He commissioned his disciples “Therefore go and make disciples of all nations, baptizing them in the name of the Father and of the Son and of the Holy Spirit” [Matthew 28:19]. Baptism is the first of Saving Mysteries, by means of which the faithful gains membership of the Church and is adopted by Christ. Through baptism, man is cleansed of original sin as well as any sins committed prior to baptism; he is born again by the grace of the Holy Spirit and becomes a new man and heir to the Kingdom of Heaven.

The initial acts of our Lord’s saving economy in which He revealed Himself to the world (the Annunciation by Archangel Gabriel, Nativity, worship of the magi, Circumcision on the eighth day, Presentation on the fortieth day, Baptism in the Jordan) were all celebrated in the early days of Christianity during the great feast period known as Epiphany.

Subsequently, these memorable events turned into separate feasts of their own, arranged over specific months and days of the year. Only on the feast of Epiphany Nativity and Baptism were celebrated together, since, according to the Gospel, Christ’s 30th birthday was also the day of His Baptism, which, according to tradition, occurred on January 6.

In the fifth century, the Greek Church separated the feast of Nativity from the feast of Baptism, and moved Nativity to December 25, setting an example for Christian churches worldwide. The Armenian Church, however, faithful to ancient tradition and apostolic canons, to this day celebrates Nativity and Baptism on January 6, in the feast of Epiphany.

The feast of Epiphany lasts eight days and concludes with the feast of the Lord’s naming.